What can we learn from today’s most inspiring business leaders?

In bringing together the content for the Global AMP at IE Business School, I wanted to explore the world’s most inspiring as well as innovative business leaders … leaders who really are changing their worlds, right now.

The Global Advanced Management Program is all about transformation – stepping up to transform your business, and yourself.

Of course, there is a diverse range of business leaders to learn from – some good, others less so. My personal favourites include Anne Wojcicki at 23andMe, Microsoft’s Satya Nadella, and Zhang Ruimin from Haier.

Some leaders are great in some ways, but not so good otherwise. We’re inspired by the incredible ambition, and unstoppable determination of Elon Musk, yet I’m not sure I admire how he behaves or treats others.

Some people are just truly amazing people. Tan Le, for example, the Vietnamese boat refugee who became a world leading neuroscientist, or Warren Buffet, still dreaming and investing for the future, now in his nineties.

Entrepreneurs have fabulous stories, like Sebastian Thrun who went from GoogleX to Udacity to Kitty Hawk, or Tobi Lütke transforming the world’s retailers. As do corporate leaders like Bernard Arnault and Mary Barra.

Here are some of the leaders who I interview in my new book Business Recoded: 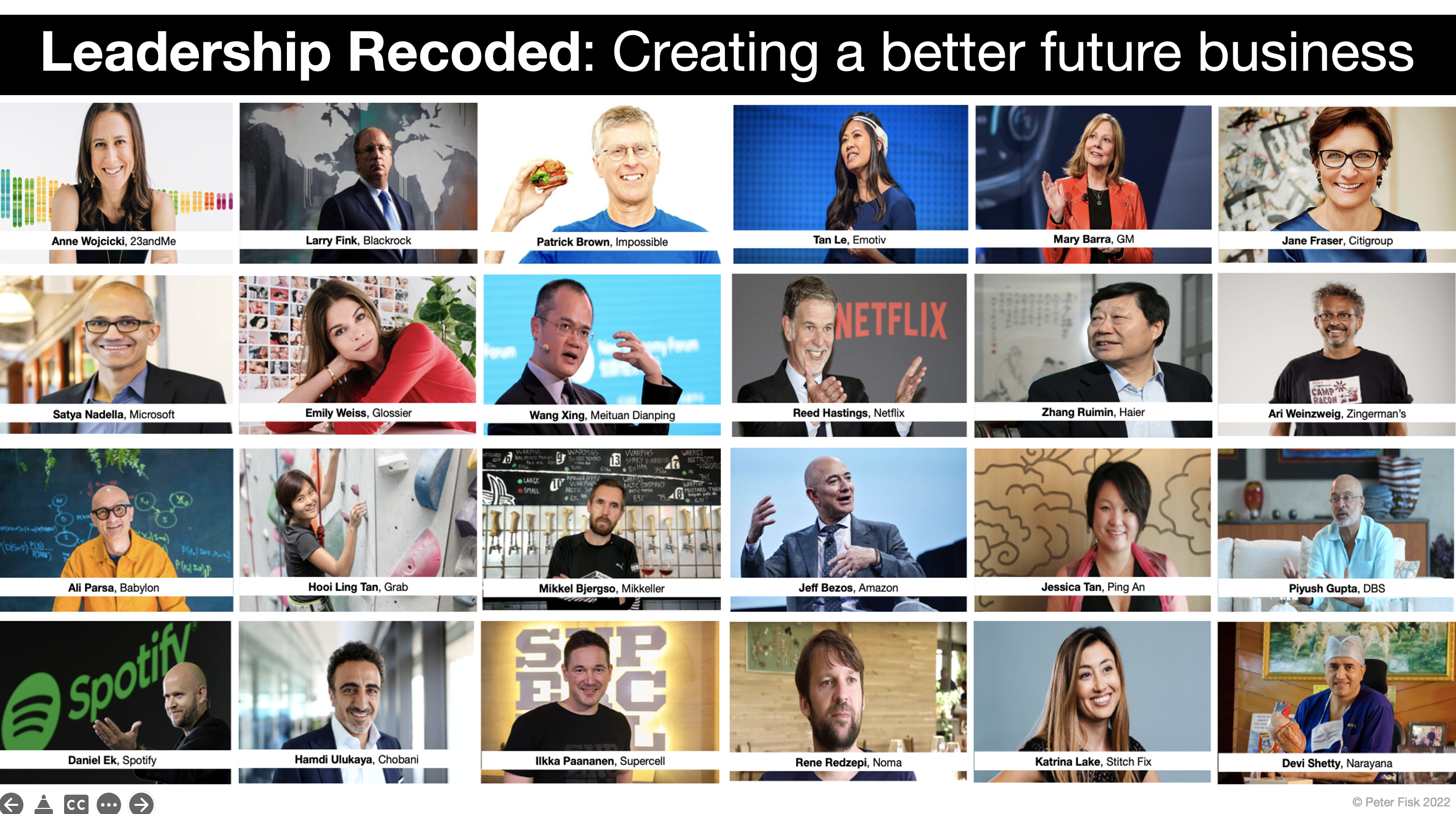 The new DNA of leadership

Having spent many hours with leaders, one to one, and with their teams – teaching, coaching and advising them on strategies and change – and explored the many leadership theories, and insights from today’s most inspiring leaders – it became clear that there are some common attributes.

These attributes form a pyramid, somewhat analogous to Maslow’s hierarchy of needs. At the foundation are the essentials required to operate, and deliver performance. Above these are the attributes required for progress, to make sense of change, to find new growth, and drive innovation.

At the top are the attributes required of leaders who want to transform their organisations, guided by purpose beyond profit, to create a better business, and a better world. 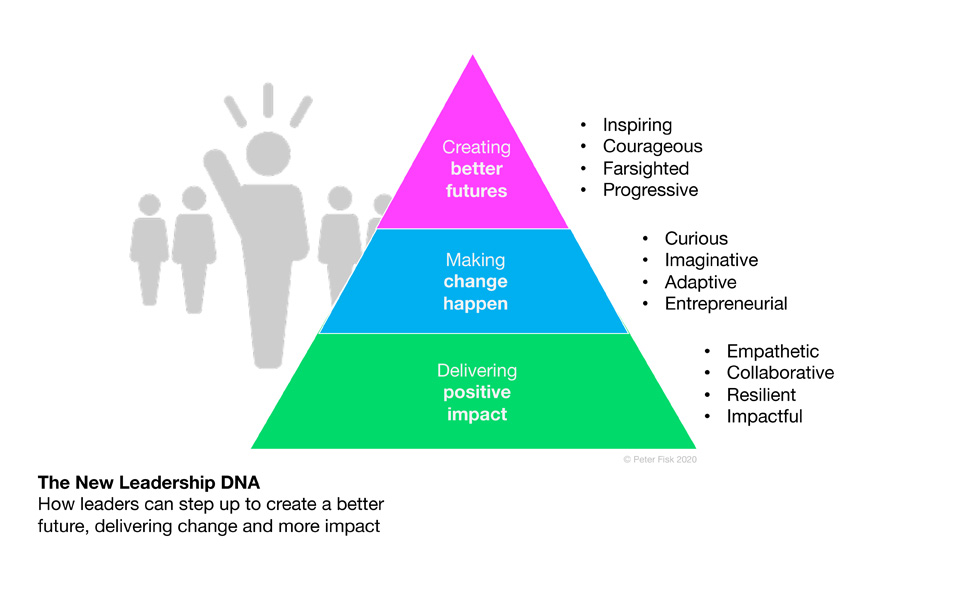 These 12 attributes collectively make up the “new DNA of leadership”, with 3 levels from the top to the bottom:

The key question for any leader should be “what kind of future do you want to create, shape and lead?”

Leaders need the courage to step up, to envision and implement this future.

What can you learn from each of them?

Anne Wojcicki, 23andMe co-founder & CEO …  on the benefits of DNA testing, and the future of medicine. Recently she partnered with Richard Branson to take the genetics business public.

Bernard Arnault, LVMH chairman and CEO … is France’s richest man and the mastermind behind the world’s biggest luxury group, LVMH. But even he had his doubters early on.

Jane Fraser, CEO of Citigroup … recently stepped up to CEO, and became the first woman to lead one of Wall Street’s top banks, saying that leaders need “curiosity, creativity and courage”.

Patrick Brown, CEO of Impossible Foods … the Stanford professor stepped away from academia to start a business with a passion to eliminate animals from human food.

Tan Le, founder of Emotiv …  is merging the human brain with technology and blurring the line between science fiction and reality. But before changing other people’s lives, she had to change her own.

Satya Nadella, Microsoft CEO … in 2014, he stepped up to take the fading tech giant to a new place, embracing AI and cloud as engines of transformation, and turning Microsoft into a $2 trillion business.

Jessica Tan, co-CEO of Ping An … a candid conversation on what it takes to succeed as a leader in this new era of globalization. Within Ping An, she also created Good Doctor, the world’s largest healthcare platform.

Hamdi Ulukaya … the Anatolian shepherd who grew up as a nomad in north eastern Turkey, went to USA, and created the world’s leading brand of Greek yogurt, calls himself the anti-CEO, and wants to give all his money away.

Sebastian Thrun, Udacity founder and CEO of Kitty Hawk …  this tech wizard used to head up Google X and hold a tenured teaching position at Stanford University. He is now on a mission to change the way the world learns.

Emily Weiss, Glossier founder and CEO … mission to reinvent the beauty industry, the importance of brand authenticity and her company’s emphasis on deep online engagement with its customers.

Neil Blumenthal and David Gilboa, co-founders Warby Parker … the four founders were students at Wharton business school. Fed up with the high cost of prescription glasses, they decided to do something about it.

Uğur Şahin and Özlem Türeci, cofounders of BioNTech … the immunologists (and married couple) share how their decades of mRNA research powered the Pfizer-BioNTech vaccine – and what this could mean for the future of vaccines and more.

Marcos Galperin, CEO and co-founder of Mercado Libre … shares his expertise. lessons learned, and best practices within the e-commerce industry in Latin America.

Hooi Ling Tan, Grab co-founder … discusses growing the ride-hailing platform that became a “super-app” in Southeast Asia and how digitizing the region’s economy has helped empower both drivers and customers

Jacek Olczak, CEO of Philip Morris International … driven by a vision to make the world smoke-free, to “kill the Marlboro Man by 2025”, and in shifting from its old business, to drive new growth and value creation.

Mary Barra, CEO of General Motors … announced that her company would transition to an all-electric light-duty fleet by 2035. But how do you exit a business that today accounts for nearly 100% of your profits?

Jeff Bezos, Amazon founder … talks about the early days of creating Amazon, after leaving his Wall Street banking job to create “the world’s largest online bookstore”, what he’s learned since then, and his rocket company, Blue Origin.

Tobias Lütke, founder and CEO of Shopify … giving every small shop the power to compete online in a global marketplace, how technology is transforming business and markets, and how he sees the future of retail.

Henrik Andersen, CEO of Vestas … the world leader in wind power, the world’s most sustainable company in 2022, what is the future of energy and what is the green transformation the biggest change in society since the industrial revolution.

Bob Iger, former chairman and CEO of The Walt Disney Company … from his early days as a weatherman, he transformed the company into one of the largest media conglomerates in the world

Jensen Huang, Nvidia founder and CEO … discuss the next advances in computing, the future of AI, the chip shortage, and the “omniverse” which is Nvidia’s metaverse.

Indra Nooyi, former CEO of Pepsico … a champion of long-term thinking and a “performance with purpose” strategy for growth, and helping more women succeed in the workplace.

Ben Francis, founder and CEO of Gymshark … talks about how he started athleisure brand  as a teenager and how he has scaled it to be one of the UK’s most valuable privately held companies.

Have the courage to lead the future

The implications for business are broad and significant: a better approach to people and the jobs they do, organisation structures and how people work, a different approach to strategic development and innovation, how brands develop and engage customers, and a more enlightened approach to how businesses grow to create and share value.

The new codes of business challenge our deeply engrained assumptions and practices, some extending and strengthening what we already do, others replacing the old ways.

There is no magic formula for business success, although plenty of concepts and models, frameworks and tools which can help. Developing leaders in today’s world is much more of a mindset, a way of thinking, opening your mind to a new world of possibilities, and the many ways to succeed in it.