23andMe  @23andMe
Genetics can impact your likelihood of developing heart disease, along with other heart-related conditions such as… https://t.co/B97lP5t4Ux
reply retweet favorite

23andMe  @23andMe
Heart disease can be “silent” and difficult to diagnose until there are symptoms related to a heart attack, arrhyth… https://t.co/Ox9v3HGGRV
reply retweet favorite

23andMe  @23andMe
According to the CDC, every 34 seconds someone in the U.S. dies from cardiovascular disease. But making heart healt… https://t.co/VGc9iLlYW8
reply retweet favorite
Load more

The $99 DNA profile could change your life 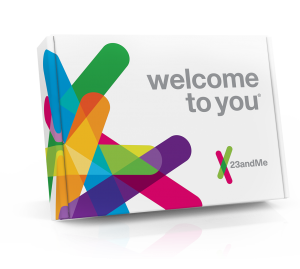 By simply taking and mailing a saliva example from your home, and receiving analysis and interpretation within a week, 23andMe enables people to learn about their inherited health traits and genetic links to certain diseases. With around $120m investment, 23andMe can now offer 244 reports on health and personal traits, as well as genealogy and ancestry information that people can share socially all for $99.

For a price equivalent to a new pair of running shoes, the self-testing package is now accessible to millions of consumers, curious to understand the secrets locked in their DNA, and what it might mean for them. Imagine how it can change people’s lifestyles – prompting new diets and fitness regimes – as well as transforming insurance policies and healthcare planning.

It also enables 23andMe to create the world’s largest private database of genetic information, to explore and distribute this rich knowledge bank (around 90% of patients are happy for their aggregated data to be used). The results can be used in research conducted by Wojcicki’s team, plus pharmaceutical and healthcare partners to drive innovation and focus investment.

Pharma companies believe that genetic data could be instrumental in creating better, more targeted treatments for diseases. Genentech is working with 23andMe to learn if genetic factors influence a person’s response to the cancer drug Avastin, whilst Amgen recently bought DeCode, a company that explores the link between genes and diseases, for $415 million.

As 23andMe builds its database of millions of DNA profiles, more accurate analysis and innovation is possible, and better targeted solutions emerge. Indeed there are similarities to how Google became a better search engine, improving usefulness to users, and attractiveness to partners, as volume grew.

At the time of launch, in 2006 the business didn’t seem like a gamechanger of the drug industry, let alone the patient experience. The process was expensive, $999 for much more limited analysis, and was dubbed as “spit parties” by the press as wealthy Silicon Valley types shared saliva with their cocktails. The price has fallen dramatically since, making it affordable to most people. At the same time this has rung alarm bells with regulators, an inevitable challenge if you want to break rules, and all part of the journey.

In 2018, 23andMe partnered with pharmaceutical company GSK to use test results from 5 million customers to design new drugs, and based on the success, GSK invested $300 million in Wojcicki’s business. In 2020, they announced their partnership’s first clinical trial: a joint asset being co-developed by the two companies for cancer treatment.

In 2020, the therapeutics team had developed a portfolio of research programs across multiple disease areas. They recognised that whilst maintaining ownership of the IP, they needed partners to develop and test the potential drugs. Wojcicki turned to a smaller Spanish pharma company, Almirall, which specialises in skin therapies as her first development partner. She called it a seminal moment. 23andMe now had a database of over 10 million consumer tests, “a treasure trove” to create the future of healthcare.

In 2021, 23andMe merged with Sir Richard Branson’s special-purpose acquisition company (SPAC), known as VG Acquisition Corp, in a $3.5 billion transaction, to take the business public. Later in the same year, 23andMe aquired Lemonaid Health, a telehealth company, for $400 million. A new business model is rapidly taking shape. Compared to the old world, where drugs were made generically, and pharma companies never connected with patients, 23andMe is now fundamentally disrupting that model.