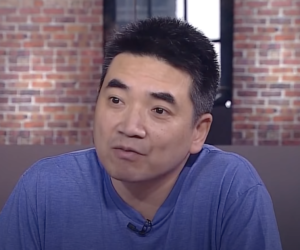 Eric S. Yuan (he / him / his)  @ericsyuan
Giving Thanks: What Our Zoomies are Grateful For in 2022 https://t.co/Od7GnoEdNQ
reply retweet favorite

Eric S. Yuan (he / him / his)  @ericsyuan
I was very excited to have a great fire chat with my friend and mentor @EnriqueJLores at Zoomtopia 2022! https://t.co/4oAok9YfkX
reply retweet favorite

The Zoom founder who says his business is all about delivering happiness.

"The greatest, most sustainable happiness comes from making others happy. It is our privilege to deliver you happiness every single day" says the former Webex engineer who thought he could do better, so created Zoom.

In the suburbs of Santa Clara, California, 50 year old Eric Yuan joins his latest call. The palm trees swaying behind him make for a surreal setting. He could have chosen a day on a Hawaiian beach, or even the spectacular Mount Tai in Shangdong Province, near to where he grew up in China. That’s one of the many benefits of his web conferencing service, Zoom, now the world’s fastest growing, where you can easily choose any background you want. No more embarrassing peaks into your home to distract your colleagues or clients.

It has been a crazy time for the Chinese American since Zoom’s $15.9bn IPO last year. As the world’s stock markets have tumbled by 25-35%, Zoom has doubled in value since January, making Zoom now worth $35bn. He stills own 20%, but the new billionaire is one of the most frugal people you will meet, remembering as a teenager in China how he hunted through rubbish dumps for scraps of metal to sell in order to fund his education.

Yuan was captivated by the success of Bill Gates, which inspired him to study computer science in Shangdong. Drawn to the US by the dotcom boom of 1997, and despite not speaking English, and after nine attempts to gain a visa, he landed a job writing code for online conferencing service Webex. After the business was sold to Cisco, he went on to become VP of engineering. However he could see that mobile and cloud technologies were rapidly emerging, and could transform the user experience, yet his Cisco bosses did not share his passion.

He left in 2011 to start his own company from the ground up – a simpler, more intuitive, app-based experience to meet the rapidly evolving world of remote and collaborative working. Initially calling is Saasbe, he turned to former colleagues to help him fund a team of 30 engineers back in China work on his new idea. He worked tirelessly for two years on the new app, a lightweight web client that would work on any device, even with slow or patchy internet connection. He also added more human features, like the choice of virtual backgrounds.

Zoom launched in 2013, initially targeting the corporate market, and creating networking solutions like Zoom Rooms with partners such as Logitech. Within a year he had 40 million subscribers, including 65,000 organisations. In 2017, after subsequent rounds of funding, Zoom became a $1 billion valued “unicorn”, now with around 2000 employees (a third still based in China), and started exploring new areas such as virtual reality. Zoom evolved into a “freemium” business modelbased on subscriptions, with the first 40 minutes of any call free and able to accomodate up to 100 participants, although the platform caters for anything to 1000 people.

Since January this year, Yuan has seen huge growth in Zoom, becoming indispensable to the world’s schools, businesses and governments, as COVID-19 shut down the physical world. Yuan offered free access to all schools, and now sees around 1 million app downloads every day. He’s been surprised too by the innovative social applications that have emerged – from virtual fitness programs to virtual cocktails parties.

Remote working, though, is nothing unusual for Yuan. He typically only makes two business trips a year, aware of the time inefficiencies and environmental impacts of travel, when you can simply click onto Zoom. Yet he is a big fan of human engagement, defining Zoom’s mission as “delivering happiness” and measuring business performance based on happiness, trust and gratitude, as equals to more usual financial results.