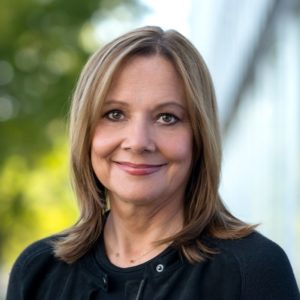 Mary Barra  @mtbarra
.@GM applauds all who worked tirelessly on the bipartisan CHIPS and Science Act and we celebrate its enactment into… https://t.co/P8MBZTGWVr
reply retweet favorite

Mary Barra  @mtbarra
Excited to have our #EVs on display in New York City today with our team at the J.P. Morgan Conference. #GMCHummerEV https://t.co/ZvHXOrsfWx
reply retweet favorite

Reinventing GM for an electric future

She challenged the traditional culture of GM in dramatic style, rejecting complacency and embracing new tech, on a mission to reinvent her industry.

Car making is far from a luxury business, particularly in the decimated heartlands of the American car industry. The arrival of better, cheaper brands like Toyota from Japan, and more recently others from China and South Korea, fundamentally challenged local makers. Globalisation was killing the local industry.

Mary Barra grew up just outside Detroit, at a time when the city and car making was booming. Her father Ray Makela worked as a dye maker for 39 years at the Pontiac car factory, whilst Mary started working in the industry at the age of 18, checking fender panels and inspecting hoods to pay for her college education.

“My parents were both born and raised in the Depression. They instilled great values about integrity and the importance of hard work, and I’ve taken that with me to every job” she says.

When studying at the General Motors Institute, her tutor recalled how he taught her many aspects of car design, including how to make windscreen wipers work. He said she was always the leader, taking charge of mostly-male groups, balancing her strong technical knowledge with her easy-going communication skills.

She joined GM full time and worked through the ranks, becoming VP of Global Manufacturing in 2008, and then of Human Resources. In 2014, with the business increasingly struggling to survive, and uncertain about a future that looked electric and driverless, she became CEO.

Today she is a woman on a mission, to save GM and to reinvent her industry.

In her first year as leader, GM was forced to recall 30 million cars due to safety issues that resulted in 124 deaths. She was called before Senate to explain the problems, and brand reputation plummeted to an all-time low. The recalls, however, also demanded significant change in work practices. She introduced new policies for employees to report problems, and a new culture of openness and determination to fight back was born.

Over the next five years Barra pushed GM to transform itself, to embrace innovation and new ways of working, both operationally and strategically. In particular she wanted to seize the leadership in new technologies such as hybrid engines and automated driving.

Asked by CNN what it takes to transform a traditional business she said “It takes a lot! You need the right people, the right culture and the right strategy. To be truly great, your team must have diversity of thought and be willing to collaborate constructively.”

“Your company culture should empower and inspire people to relentlessly pursue the company’s vision, always with integrity.  A strong strategy is the roadmap to achieve your vision, but you need strategies for this year, as well as the next five, 10, and 20 years — and they all may need to work in tandem. Our vision at GM is a world with zero crashes, zero emissions and zero congestion, and everyone on the team knows we are committed to putting the customer at the centre of everything we do.”

“At GM we live and work by a set of seven behaviours, one of which we call Innovate Now. This means ‘I see things not how they are but how they should be.’ So, we empower our teams to innovate and create, while also understanding macro trends.”

In 2016 Barra splashed out over $1billion to invest in Cruise, a software business for driverless cars. She put it at the heart of her revolution. Her acquisition gave the old business an injection of new capabilities, but also new courage and creativity too.

“My definition of ‘innovative’ is providing value to the customer” she adds.

Her move was worth $20 billion of market value in investor confidence alone. Soon revenues started to grow back, employees and customers both believed in a new future. The Chevy Bolt, a car with no steering wheel, suddenly made autonomous dreams real, and the GM brands started to become desirable again.