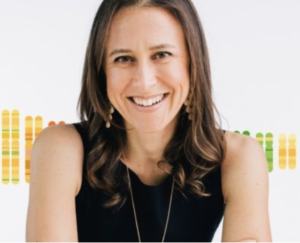 Anne Wojcicki grew up on the campus of Stanford University, destined she thought to become an academic like her father. Instead she found herself on Wall Street, fascinated by businesses and in particular healthcare. The combination of an academic father, a love of data and analytics, and a passion to reinvent healthcare in a more democratic, accessible and personalised way led to 23andMe.

The human genome was first sequenced in 2003, exciting scientists by the potential of understanding and applying its code. Wojcicki met up with a biology undergraduate Linda Avey who was working on a research program, and together they formed the business in 2005. At the time it cost around $300,000 to sequence an entire human genome (which had fallen from $50 million two years earlier).

23andMe sought to dramatically reduce this cost by using a technology called genotyping, which spot checks specific parts of a gene for mutations know to be linked with certain diseases, instead of a creating a full sequence. They launched the brand to consumers in 2007, with testing packs available by mail order for $999, and later directly from the pharmacy’s shelf.

The revolutionary genetics business combined ideas of new genome technology and crowdsourced funding, into a model that has since reduced the cost of DNA profiling to $99 and want to go much further in the future. For customers, it might be about discovering your ancestors, or exploring your future health prognosis, and in some case, like her ex-husband Sergei Brin, taking radical action.

Regulation was an obvious challenge. Initially there were no rules for such activities, enabling rapid innovation, but also making regulators more cautious. They were concerned about accuracy of tests, and how people might misinterpret information. She saw the regulators as partners rather than adversaries, working together to create a better, safer solution for everyone.

Business model innovation enabled her to continue to reduce costs and make it available to everyday people. She simplified the analytics to make them comprehensible to consumers, and cross-funded individual testing by selling the aggregated data to corporates.

In 2020, the therapeutics team had developed a portfolio of research programs across multiple disease areas. They recognised that whilst maintaining ownership of the IP, they needed partners to develop and test the potential drugs. Wojcicki turned to a smaller Spanish pharma company, Almirall, which specialises in skin therapies as her first development partner. She called it a seminal moment. 23andMe now had a database of over 10 million consumer tests, “a treasure trove” to create the future of healthcare.

In 2018, 23andMe partnered with pharmaceutical company GSK to use test results from 5 million customers to design new drugs, and based on the success, GSK invested $300 million in Wojcicki’s business. In 2020, they announced their partnership’s first clinical trial: a joint asset being co-developed by the two companies for cancer treatment.

In 2021, 23andMe merged with Sir Richard Branson’s special-purpose acquisition company (SPAC), known as VG Acquisition Corp, in a $3.5 billion transaction, to take the business public. Later in the same year, 23andMe aquired Lemonaid Health, a telehealth company, for $400 million. A new business model is rapidly taking shape. Compared to the old world, where drugs were made generically, and pharma companies never connected with patients, 23andMe is now fundamentally disrupting that model.

Wojcicki is more passionate than ever about the potential of the business. Revolutionising the world of healthcare, and revolutionising wellbeing for billions of people across the world.