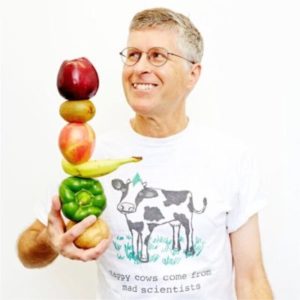 Impossible Foods  @ImpossibleFoods
An empire built on YouTube with a side of Impossible Burgers from @MrBeastBurger. Congrats to @MrBeast for making… https://t.co/2ZVicKOhyv
reply retweet favorite

Impossible Foods  @ImpossibleFoods
@HausTrades Oh no! Thank you for bringing this to our attention-- we're so sorry for this experience. Please send u… https://t.co/HnJDzmIn0r
reply retweet favorite

Impossible Foods  @ImpossibleFoods
@KAMeteyer @JulieFortner19 Say it louder for the people in the back! 🌱
reply retweet favorite

On a mission to eliminate animal-based foods, he created the Impossible Burger that sizzled and tasted better than meat

10 years ago, Patrick Brown, a 56 year old biochemistry professor at Stanford University walked out of his job, frustrated at the world’s increasing inability to save itself.

He concluded that the best platform to create a better world, was not government or academia, but business. He recognised the uniquely powerful, inspiring potential of brands, to engage consumers through their everyday actions, to do good.

Brown decided that the environmental threat was the most profound challenge which he could personally add value to, and in particular, the use of animals to make food.

Beef farming has caused huge destruction to rainforests, and the animals themselves significantly add to the world’s carbon emissions – more than the entire world’s transportation systems. He organised a conference on “the role of animals in a sustainable global food system” and was frustrated by nice words but little action.

He established Impossible Foods with a mission “to completely replace animals in the food system by 2035.” He calls it “the most important and urgent problem in the world.” To visualise the challenge, he created an ad campaign (below) where an astronaut returns to Earth in the next decade, to find a planet starved of much of its natural habitat.

He resolved that the best strategy would be to create a product that competed against animal foods commercially. “Why does meat smell, feel, cook and taste like meat?” he challenged his small team of scientists.

They found their answer in heme, the iron-containing molecule in blood, a component of haemoglobin.

Brown started exploring how he could source the molecule in alternative ways from nature. He found heme in abundance in the roots of clover, and later also in soybean.

5 years later, and with $300 million funding, he launched the Impossible Burger, a burger that looked, smelt, sizzled and tasted just as good as a traditional beef version. Even better when you consider its wider impact on the world. 0% cows, 95% less land, 74% less water, 87% less emissions.

His decided not to target vegetarians, but to win over meat-eaters, by understanding what drives them to choose meat – taste, smell, texture – and then offer those benefits in a better way. Indeed, he defines his non-animal burger as “meat” saying “animals are a food production technology, and plants are another” he says, and so seeks to frame his product not as alternative, but as better.

Impossible Foods is now focused on developing a much broader portfolio of foods, including plant-based pork, chicken and fish. While beef farming is the most damaging to the environment, fishing is a close second. The total population of fish in oceans and rivers is less than half of what it was 40 years ago because of overfishing, and some species have declined in numbers by 90%.

However, Impossible does face challengers – who say that while, it clearly reduces environmental impacts, it is not necessarily a healthier alternative than real meat.  “This product is highly processed,” says Tamar Samuels, a nutritional expert. “Ultra or highly processed foods are foods that have additional artificial colours, flavours, and preservatives to promote shelf stability, preserve texture, and increase palatability. They usually undergo several processing steps using multiple ultra-processed ingredients.”

While Impossible Meats have been fortified with vitamins and minerals and do contain some micronutrients – made mostly from soy, coconut oil, sunflower oil – processed foods are not as nutritious as unprocessed foods. “Fresh foods found in their whole and natural form have the perfect balance of macro, micro, and phytonutrients that cannot currently be replicated in ‘healthy processed foods’.”

His mission is to save the environment. And of course, he recommends a balanced diet of fresh, nutritious foods alongside an occasional plant-based burger.

In an interview with Time magazine, he reflected “Right now, the dominant relationship between humans and animals is exploitative. Replacing animals as a food production technology will absolutely change that. Hopefully, rather than looking at animals essentially as a technology for producing food, we’ll appreciate them more for the role that they play in making this a beautiful planet to live on.”