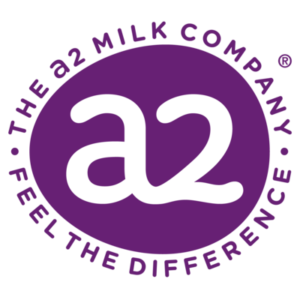 Latest tweets from The A2 Milk Company

The A2 Milk Company

The a2 Milk Company was founded in New Zealand in 2002 by Dr. Corran McLachlan after a scientific discovery; while studying at Cambridge University, Corran learned that proteins in milk affect people differently.

Most cows’ milk brands today contain a mix of both A1 and A2 proteins. All a2 Milk™ products come from cows hand-picked to naturally produce only A2 protein and no A1 – and that makes all the difference.

The A1 protein in regular cows’ milk might cause stomach discomfort in some of us. If that’s you, a2 Milk™ may help. But for the unique benefits of a2 Milk™ to work it needs to be the real deal – true a2 Milk™.  From cows that naturally produce only the A2 protein and none of the A1.

McLachlan discovered there was a safe and simple way to identify cows who produced milk that was naturally A1 protein free. From there The a2 Milk Company was born. Research over the years demonstrates that many people who have digestive discomfort when drinking ordinary cows’ milk find a2 Milk™ easier on digestion. That’s because a2 Milk™ contains only the A2 protein and no A1.

Today, The a2 Milk Company mission remains the same: to pioneer the scientific understanding of the A2 protein type so more people can enjoy the nutritional goodness that only comes from real and natural milk. The a2 Milk Company has products and trading activities in Australia, New Zealand, China, the US, UK and a number emerging markets in Asia.

Dual listed in Australia and New Zealand the company has grown rapidly. Revenues have grown fivefold between 2014 and 2017 when the company reported $NZ550 million worth of sales as demand continued to rise in ANZ, China, the US and UK.

Here is an extract from FastCompany magazine, taking up the story:

In 2016, overall sales of milk dropped 5%, representing a loss of more than a billion dollars for dairy producers. That caps more than 10 years of declining sales of conventional milk. Amid a new environment in which more than 25% of Americans now identify as lactose intolerant (and many more others avoiding animal products), the stuff from cows is losing market share to “alternative milks.” To stop the churn, the industry has fallen to desperate measures: A Wisconsin state legislator recently introduced the Dairy Pride Act, which would place limits on what exactly deserves to be called “milk,” claiming that many nut, seed, plant, and algae alternatives are often less nutritious, which may mislead customers about their health benefits and damage the inherent value of that once classically cow-made drink.

Why not sell real milk to those supposedly lactose intolerant people instead? That’s the promise of The a2 Milk Company, an Australia-based venture, which formally entered the U.S. market in 2015 after success in Australia and China. The company’s basic argument is that while milk may cause digestive issues, most Americans who believe they are lactose intolerant actually aren’t.

“The reality is, research shows only 4% to 5% of people in the U.S. are really lactose intolerant,” says a2 Milk U.S. CEO Blake Waltrip. “So what that leaves is a huge swath of consumers, say 65 million or 70 million people in the U.S., who have a milk intolerance that is very likely not lactose-[based]. It’s something else.” Waltrip’s big bet is that the true problem is from exposure to what’s called A1 beta-casein protein, which only certain cows produce and has also been linked to digestion issues. While it’s only associated with two-thirds of cows, the milk industry combines product from numerous herds into large batches, so A1 gets swirled into nearly everything that’s offered in traditional cartons and gallons at the grocery store.

To solve that, a2 Milk doesn’t source from A1 protein-making cows at all. They recruit farmers to corral only those capable of producing a differently structured variation called A2, which one-third of cows still do. The result is still milk. It has the exact same nutritional value any A1 iteration. Except this version should be drinkable by nearly everyone.

Cows didn’t use to cause this kind of trouble. Roughly 1,000 years ago, scientists hypothesize that cows produced only what’s been classified as A2 beta-casein, a different type of protein that didn’t cause any stomach problems. That changed with industrial farming practices, when herds were rounded up, bred often, and put into milking lines to increase yields. At some point, there was a genetic mutation that occurred within some European herds, leading to lineages that now produce either entirely A1-based proteins or an A1 and A2 blend, along with just A2-specific cows from those who don’t carry the trait. “The A1 protein is very likely the culprit creating that gut inflammation in these people’s bodies, and that creates symptoms that mimic the same kinds of symptoms you would experience if you were lactose intolerant,” Waltrip says.

To avoid that, a2 Milk producers start with a bovine genetic test (it requires a hair sample) to spot A2-specific cows, and then milks those separately, requiring farmers to segregate their herds and do numerous tests to ensure everything remains pure during processing.It’s a complicated selling point that ultimately requires a leap of faith. “I sometimes say this is . . . a completely natural innovation,” says Waltrip, who notes tactfully that lactose-fearing consumers have their own internal “feedback mechanism” to tell pretty quickly if the beverage works or not. “If I have a milk sensitivity, I’m going to know within an hour or two whether this solved my problem, and I think that’s pretty phenomenal in terms of consumer benefit,” he says. (For the record, Waltrip used to avoid conventional milk because of his own digestive issues, which appear linked to A1 sensitivity. He now happily drinks his own product.)

The a2 Milk Company’s offerings cost about a third more than conventional milk, as much as $1.50 more per gallon. Because it has the same nutritional profile as any other milk, though, it solves the alt-milk nutrition issue: The exact product claim is “six times more calcium than soy milk, eight times more protein of almond milk, and six times more potassium than rice milk.” That still doesn’t help consumers who might be uncomfortable with the ecological footprint of dairy operations, but it does help struggling farmers. Waltrip says he pays his ranches a premium to do the work because it’s more intensive.

In supermarket, A2 lives alongside lactose-free options in the specialty milk category; sales in that category have risen 16% year-over-year as of late March. In 2016, the company, which is also available in Australia and China, earned $222 million worldwide. In the first half of 2017, overall sales are up 84% year-over-year. They’re now expanding nationally through a network of different retailers including Whole Foods, Sprouts, Safeway, Kroger, Target, Trader Joe’s, and Publix.

Waltrip knows a thing or two about selling seemingly healthful groceries. He worked previously as the CEO of Ancient Harvest, which delivers quinoa-based foods, and before that as chief marketing officer at Celestial Seasonings tea. He also supports the Dairy Act. “We . . . agree that plant-based alternatives should not be able to use the term ‘milk,’” he writes in an email, noting that “plant-based alternatives do not deliver . . . nutritional benefits in the same way.” (That’s not to say that innovators can’t offer an even more enticing substitute for some people: Pea-based Ripple, for instance, promises similar protein levels and 50% more calcium than standard 2% milk.)

As with all aspiring entrepreneurs, Waltrip sees a2 Milk not just as a milk company but as something much bigger: expanding to capture more of the shopping cart, through lines of yogurt, cheese, cream, and ice cream. Meanwhile, the company already has a line of infant formula that’s doing well overseas. “Look, we started as a milk company and that was our foundation, but what we really are is a dairy nutrition company,” he says.