Farfetch  @farfetch
With events now starting to make their way back into the calendar, it's the perfect time to smarten up your wardrob… https://t.co/aM73wSRv9z
reply retweet favorite

Farfetch  @farfetch
New: the AMBUSH x Nike apparel collection has arrived — get it on FARFETCH before it's gone. https://t.co/LS8YqVla4U https://t.co/O80AgK3MHu
reply retweet favorite

Farfetch is a revolutionary way to buy fashion, bringing together hundreds of the world's best independent designer boutiques.

Farfetch is a global fashion e-tailer.

It connects shoppers with more than 400 luxury boutiques through a single Internet storefront for a seamless logistical experience for shoppers and sellers.

Farfetch offers any small mom-and-pop shop a sleek, streamlined online shopping technology to power e-commerce. It also offers logistical intelligence for global same-day delivery amd in-store returns, and provides access to a growing base of high-end clientele all over the globe.

By sending scouts around the world to canvas for local boutiques, Farfetch has signed on boutiques based in 35 countries and ships to customers in 190 countries, generating a revenue of $500 million in 2015.

The company has offices in 10 of those countries and offers customer service in 10 languages–even adjusting sales to the cultural customs of each place (for example, Brazilians like to pay in 12-month installments). 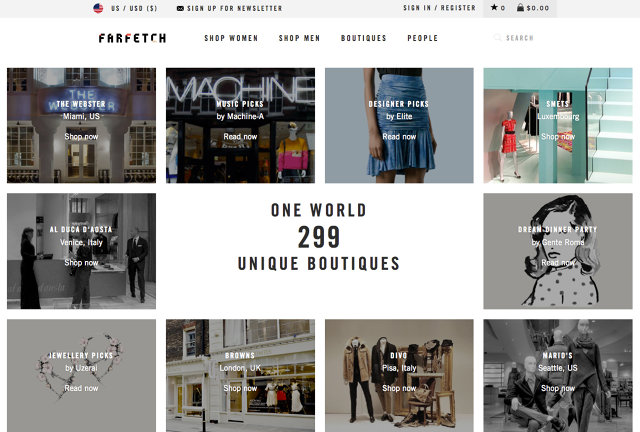 But Farfetch, founded in 2008 by Portuguese entrepreneur Jose Neves and based in London, doesn’t just cater to small boutiques. In 2015, the site opened its doors to high-end fashion brand Jason Wu, offering all of Farfetch’s online ammo for logistics as well as a luxe, department store-like feel.

Now, the company will focus on growing its customer and designer base while streamlining its operations to keep improving its user experience on both ends.

Here is an extract from a recent FT article, exploring the next steps for Farfetch:

José Neves, the Portuguese-born founder and chief executive of luxury fashion technology business Farfetch, sits in a private room at one corner of his company’s vast new open plan office on Old Street roundabout, the fulcrum for London’s tech start-ups, reeling off the material advantages of living in the digital age. When he arrives at the joys of hailing taxis from smartphone apps, however, his relaxed demeanour transforms into a stern seriousness. “I don’t like Uber in London,” he says. His beef is that one of the world’s most well-funded tech start-ups is taking trade from small business people maintaining a level of service admired globally. “The black cab is an institution that we need to preserve,” he says. “That may cost a little bit more, but if you go to a Michelin Star restaurant it will cost a bit more than if you go to McDonald’s.” There is a logical thread between this and his pitch for Farfetch.

The company helps luxury fashion brands and boutiques sell their clothing globally while dramatically improving the efficiency of their back office operations through clever data use. Although Farfetch’s client list includes many leading labels, a lot of the 400 boutiques and more than 1,600 luxury designers that pay for the company’s services are small independent traders. Farfetch, whose website gets over 10m hits a month and ships garments to more than 190 countries, is redressing the power balance in clothes retailing in favour of the little guys by enabling them to have the economies of scale enjoyed by multinationals, states Neves.

Pointing to his crisp white shirt and casual black trousers, he notes that similar garments could easily be obtained by generalist clothing manufacturers but he says that his have a special quality because they are made and sourced by people with a passion for high quality tailoring. “We work with a fantastic store in Newport Beach [California] called A’maree’s,” he says. “It’s one of the most beautiful stores in the world. It’s just mind-blowing, stunning; the building, the architecture, the way it is laid out, but it’s in Newport Beach, which is a small town south of LA.”

His point is that without the kind of support that Farfetch provides, the store “will be open only 10 hours a day, six days a week and it will be constrained to a geography”. Technology entrepreneurship does not have to be a winner-takes-all battle between multinational behemoths, Neves argues, but can be a way of creating companies that nurture the qualities of small business service. “When you look at the companies in the first wave of the internet — the eBays and the Amazons in retail and to a certain extent what the Yahoos did with newspapers and media — these first companies threatened to kill individuality and they threatened to kill creation.

“What is very interesting, if you look at the second wave of companies, and I include Farfetch in these, is that we are saving these traditions and the industries we operate in.” One of Farfetch’s recent innovations has been to offer same day delivery in 10 top cities around the world, including Los Angeles, Miami and London. This is only possible, says Neves, because his company has a critical mass of client shops in these locations. This guarantees a wide enough choice, he adds, for demanding customers and faster reaction times than are possible under the traditional ecommerce model of shipping stock from a few large warehouse hubs. It is easier to gain a foothold in the fashion industry than the market for books or music, he notes, because by its nature it is fragmented between thousands of companies.
.
“Fashion cannot be downloaded so it needs to be touched, it needs to be tried on and there is an element of experience and retail experience which people love. The physical store is not going to go away.” Last May, Farfetch became a boutique owner itself when it acquired Browns, a London boutique known for pioneering bridal and menswear in the sixties and nurturing British designers such as Alexander McQueen and John Galliano. Neves admits he had admired the shop from a distance when he tried his hand at shoe design after moving from Portugal to London in 1996, opening a shop in London’s Covent Garden under the brand Swear.
.
This was followed in 2001 by B-Store, for which he received a British Fashion Award. The business logic of the purchase of Browns is to give Farfetch a physical space to pilot innovations created by its store design team, which can then be used to the benefit of client boutiques around the world. “Browns has this DNA of being a revolutionary company,” he says. “It pushes the boundaries and really reinvents fashion time and time again and that is very aligned with Farfetch. We do it on a more tech, digital side of things. They do it on a traditional physical store retail side of things.”
Last year, Farfetch’s sales grew by 70 per cent to more than $500m, says Neves. This remains a drop in the ocean in the global luxury fashion industry, which generates sales of $250bn each year, according to consultants McKinsey. Only 7 per cent of clothing purchases are made online, Neves says, so companies like Farfetch will continue to serve only a thin slice of the market even after years of high double digit growth. Nonetheless, online sales, he adds, are growing by 30 per cent a year.
.
“This industry will never be a winner takes all,” he insists, adding that the fashion business is only at the dawn of a dramatic improvement in efficiency and selling capabilities created by online technologies. “There are multiple tectonic plates shifting,” he adds. “Our focus is on the movement of consumption from offline to online because if you ride that wave, growing as fast as it is, you have no need to worry about competition.”
.
Although Farfetch started trading barely eight years ago, it is now a global operation employing about 1,000 staff spread across 10 offices, from Shanghai to New York and São Paulo to Oporto. Among its various business divisions, processes and administrative teams, it calls its human resources department “people and talent” in an effort to show different thinking about the way people are managed.
.
Neves tries to develop his own and his managers’ leadership skills by hiring external coaches. A key part of everyone’s development in the business, he adds, is sharing knowledge. His unpretentious work clothes seem designed to reflect a collegiate mentality, although he claims this is not conscious. “I do not try to create a persona in terms of styles,” he says. “I just wear whatever I want and it is actually quite basic. Recently it’s more monochrome, and on the baggy side of things, but it changes.”
.
He attributes at least some of his entrepreneurial genes to his grandfather, who ran a shoe factory in his native Portugal. But he began his entrepreneurial career in 1994 with a technology business founded whilst he was studying economics at university in Oporto. This set him on a road towards digitising the fashion business. Although Neves traces a logical progression from his previous ventures to Farfetch he has achieved immensely more with this venture than his first start-ups.
.
Last year Farfetch acquired the moniker “unicorn” after gaining a valuation based on its equity fundraising of more than $1bn. Like Uber, this is a U-word which causes him to bristle. “We don’t get hung up on it,” he says. The key metrics for Farfetch are the lifetime value of a customer, a combination of the cost to acquire a customer and the cost of retaining them, not the price investors put on the business at any one point, he insists. “The fact that we reached that valuation, I think, is a collateral result of us living our values and fulfilling our vision. For us, we get a kick out of being revolutionary, being brilliant, amazing [our] customers. This is what matters.”