Creating more positive impact … Microsoft looks beyond “carbon neutral”, to leverage its assets and ingenuity to make the world a better place … to be “carbon negative” 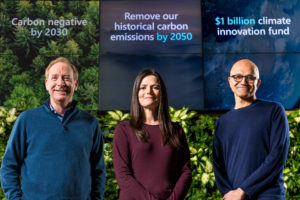 Many companies have pledged to reduce their carbon emissions, often using offset-type tactics to alleviate their guilt, and sometimes going further to the point of neutrality, where they leave the world no worse than before they started. This is nothing new. Al Gore’s An Inconvenient Truth woke us up to the challenge a decade ago, yet we have still not responded as we all need to.

Microsoft stepped up earlier this year, to go further, and committed not just to reduce its emissions, but to go “carbon negative”, wiping out all the carbon the company and its suppliers have emitted since its founding in 1975. Since then, Microsoft has released a series of announcements updating its progress.

This is a big deal, as Vox Magazine described: “The company is setting new standards, especially in the discipline and transparency it is applying to the effort, and to bring other companies, both suppliers and competitors, along with it, using shared metrics and data. There is more it could do, of course, but its more than most, and will make a real impact.”

The carbon emissions of a company (or person, city, or country) can be divided into three types:

In the early days of corporate climate engagement, companies typically measured and reduced only their direct energy emissions (scope 1 and 2). But in the past several years, in part thanks to the example set by companies like Dow, Unilever, Apple, and Microsoft, measuring and taking responsibility for scope 3 emissions has become the new norm.

This is significant, because for most companies, including Microsoft, scope 3 emissions are substantially larger than scope 1 and 2 combined.

“At Microsoft, we expect to emit 16 million metric tons of carbon this year,” president Brad Smith wrote in a January blog post. “Of this total, about 100,000 are scope 1 emissions and about 4 million are scope 2 emissions. The remaining 12 million tons all fall into scope 3. Given the wide range of scope 3 activities, this higher percentage of the total is probably typical for most organizations.”

Microsoft as a sustainability leader

Microsoft announced it has completed the largest-ever test running data center servers on hydrogen fuel cells, which can be powered by zero-carbon hydrogen generated from renewable energy. Currently, even if they run entirely on renewables, data centres have diesel generators on site for long-term backup in case of an outage. With 160 data centers worldwide and multiple generators per data center, that adds up to a lot of diesel generators. The company has pledged to phase them all out by 2030. That’s why it is testing fuel cells as backup power.

This is just one of a string of climate initiatives that go back almost a decade. The company has been 100 percent carbon neutral, through the purchase of carbon offsets, since 2012. In 2013, it implemented an internal carbon tax on the scope 1 and 2 emissions of all divisions, with the revenue going toward sustainability improvements. It created a business unit focused on climate solutions, which produces things like AI for Earth. It recently succeeded in buying enough renewable energy to account for all US domestic operations.

Microsoft’s latest sustainability report recounts all these efforts and more, including substantial efficiency upgrades at its campuses. In 2016, it won a climate leadership award from EPA.

“We’ve seen them as a leader since 2013,” says Nicolette Bartlett, climate change director at the Carbon Disclosure Project (CDP), a global clearinghouse of corporate sustainability data. The CDP has a scorecard, which takes into account hundreds of sustainability and transparency metrics, and Microsoft has consistently gotten an A. “It really matters to them,” Bartlett says.

In recent years, thanks to the IPCC report and pressure from investors and employees, concern over climate change has risen to the highest levels of the company. Josh Henretig, who spent 12 years on the company’s global sustainability team, rising to senior director before leaving in February, says he witnessed the shift from his team pushing to his team being pulled. “We started to almost stumble under the full weight and examination that the executive team imposed on us around the question: What’s really required?” he says.

“At this stage,” says Verena Radulovic, director of corporate engagement at the Center for Climate and Energy Solutions, “Microsoft has enough experience with reducing its own emissions, and support from its leadership to keep doing so, that it is able to take its climate commitment to a more ambitious level.”

In January 2020, Microsoft made a startling announcement: Not only will it reduce its scope 1, 2, and 3 emissions by 55 percent, it will continue beyond that and go carbon negative, drawing down more carbon than it emits, by 2030. By 2050, it will draw down enough carbon to account for all the company’s emissions since its founding in 1975. “It set a new bar for what is considered climate leadership,” says Radulovic.

This represents a radical acceleration of Microsoft’s carbon reduction efforts:

Brad Smith, the company’s president, was backed by CFO Amy Hood and CEO Satya Nadella, who together laid out a set of principles that would guide the company’s approach:

Nos. 1 and 2 are about proper measurement, scope 1-3 emissions, and historical emissions. “While we at Microsoft have worked hard to be ‘carbon neutral’ since 2012,” Smith writes, “our recent work has led us to conclude that this is an area where we’re far better served by humility than pride.”

“We had some very heartwarming, but also uncomfortable, conversations,” says Henretig.

Through these discussions, the company concluded that voluntary offsets are insufficient. It is now moving to a model where it directly contracts with renewable projects through power purchase agreements, (PPAs) — it is aiming to hit net zero for its scope 1 and 2 emissions by 2025 — and will compensate for what it can’t directly reduce with negative emissions.

In this area, especially, Microsoft is showing real leadership.

As for No. 3, the company announced it will establish an investment fund that will target early-stage clean energy technologies, aiming to spend $1 billion over the next four years.

Some critics have argued that the venture capital model, built around big bets with potentially big returns, is a narrow way to approach the needs of the energy sector. Just recently, for instance, the International Energy Agency argued that crucial early-stage technologies need enabling infrastructure to continue developing.

“I think it’s a missed opportunity,” says consultant and former corporate social responsibility (CSR) executive Lindsay Baker. “There are opportunities to invest in infrastructure and other types of projects that have a market rate of return, more in line with just getting your money back — I would really like to see corporations making more of those kinds of investments.”

Baker also notes that there are “plenty of opportunities for charitable giving that will help move the needle on climate,” including in lab-stage research or companies still in product development. A company like Microsoft, with well over $100 billion in the bank, could put some money toward these other areas as well, or at least divert a portion of its $1 billion to them.

Nonetheless, a billion dollars in VC money is nothing to sneeze at. Nor is the signal Microsoft has sent to other companies by committing to a goal it admits it does not yet have the technology to achieve. It says going carbon negative will require “negative emission technologies (NET) potentially including afforestation and reforestation, soil carbon sequestration, bioenergy with carbon capture and storage (BECCS), and direct air capture (DAC).”

Some of those technologies don’t exist at meaningful scale yet, and Microsoft is making a concerted effort to accelerate them. Especially if it can inspire other companies to make similar investments — Amazon announced a $2 billion climate fund in June — the spillover effects will help boost the entire sector.

“While much of Microsoft’s focus is on technologies that will help it reduce its own footprint,” says Radulovic, “the hope and vision is that these technologies will scale and others can use them.”

No. 4 is about products and services Microsoft will design that will enable its clients to reduce their own emissions. We will return to No. 4 in a bit, since some of the biggest controversies reside here.

No. 5, transparency, is another area where the company is showing leadership. Every year, Microsoft will publish a sustainability report, breaking down its emissions and progress against its goals. It has had its targets verified by the Science Based Targets Initiative as being in line with a pathway to limiting temperature rise to 1.5°C. In reporting its emissions, it is following the World Resources Institute’s Greenhouse Gas Protocol. And it is sharing its data with the CDP. In short, it is modeling best practices in transparency.

The practical steps to get started

First, Microsoft is joining with nine other large companies — A.P. Moller-Maersk, Danone, Mercedes-Benz, AG, Natura & Co, Nike, Starbucks, Unilever, and Wipro, along with the Environmental Defense Fund — in Transform to Net Zero, “a cross-sector initiative to accelerate the transition to a net zero global economy.” It will run on much the same principles that Microsoft laid out for itself, including science-based measurement and transparency, with a commitment to knowledge sharing and norm-setting.

“When you look at the reach of these initial eight companies, as well as the supply and value chains of those companies, you start to get a pretty big market share,” says Jenn Crider, senior director of communications at Microsoft. It will exert a pull on other companies to use “a common and standardized approach to the math, the language, and the accounting,” she says.

Second, Microsoft debuted a sustainability calculator that will help its cloud clients calculate and reduce their carbon footprint. Third, it pledged to be completely free of diesel fuel and diesel generators by 2030. Fourth, it raised its internal carbon tax and broadened it to encompass scope 3 emissions. Fifth, it updated its Supplier Code of Conduct to require suppliers to calculate and report their full emissions.

Sixth and perhaps most intriguingly, it has issued a request for proposals (RFP) seeking, for this fiscal year, a million metric tons of “carbon removal from a range of nature- and technology-based solutions that are net negative and verified to a high degree of scientific integrity.” It recognizes that these technologies are not fully developed, acknowledges that it will make mistakes, and says it is explicitly “using this RFP to harvest and share best available science and market intelligence on carbon removal,” to make things easier for other companies that want to follow suit.

“Someday, CO2 removal will be fully commoditized,” says Julio Friedmann, a carbon researcher at the Center for Global Energy Policy at Columbia University, who has helped advise Microsoft on its RFP. “These actions help put us on that course.”

Eighth and finally, the company is taking action on environmental justice, partnering with renewables developer Sol Systems on 500 megawatts of distributed solar energy projects “in under-resourced communities, working with local leaders and prioritizing minority and women-owned businesses.” Given that the average residential rooftop solar system is a bit over 5 kW and commercial solar rooftop systems around 100 kW, that’s a lot of solar projects, representing the “single largest renewable energy portfolio investment Microsoft has ever made.”

Alongside those projects, the company will provide $50 million in “community-led grants and investments that support educational programs, job and career training, habitat restoration and programs that support access to clean energy and energy efficiency.”