How big tech makes money … Alphabet, Amazon, Apple, Facebook, Microsoft … Are you the customer, or the product? 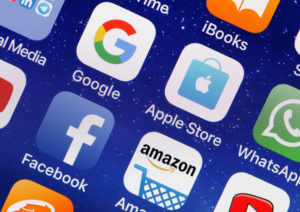 They have changed the world with their technology, harnessing the power of data and networks, some charging for your access to their content, and others charging others for access to you.

For all of their similarities, it seems that there is not one model for how these tech giants end up generating cashflow. Visual Capitalist recently brought together a deep understanding of these 5 mega companies, to try to figure out how tech makes money.

Starting with the reported performance of each company, they look vastly different in current performance,  despite having similar market valuations. Market value of course, is more a projection of future income levels, rather than just today (2018 figures).

In total, that’s $801.5 billion revenues in 2018, with 17.3% profit margin. Together they would be among the world’s 20 largest countries in terms of GDP. More precisely, they would just edge out Saudi Arabia ($684 billion GDP) in terms of size.

Apple is the biggest revenue earner, far ahead of Facebook, however profit margins become quite a different story. Facebook’s profitability booms, whilst Amazon’s is relatively slight.

Interestingly, Microsoft has the highest market capitalisation of all 5, at the end of 2018.

Going a little deeper to explore how these companies generate their revenue, we learn much more:

You buy from them … You are the customer

In the broadest sense, three of the tech giants make money in the same way: you pay them money, and they give you a product or service.

The remaining tech giants charge you nothing as a consumer, so how are they worth so much?

They sell you … You are the product

Both Alphabet and Facebook also generate billions of dollars of revenue, but they make this money from advertising. Their platforms allow advertisers to target you at scale with incredible precision, which is why they dominate the online ad industry. Here’s how their revenues break down:

So while the tech giants may have many similarities, how they generate their billions can vary considerably. Some are marketing products to you, while others are marketing you as the product.