Neuromarketing to be more persuasive … in your sales pitch, your keynote, your email, and everyday conversations

Start your presentation with a “pain dialogue” … then move on to an “emotional cocktail” … An to engage your audience more deeply, emotionally and persuasively says Christophe Morin, co-founder of neuromarketing agency SalesBrain, and author of new book “The Persuasion Code: How Neuromarketing Can Help You Persuade Anyone, Anywhere, Anytime.”

Download the first chapter: “Why Neuromarketing is a Gamechanger”

Morin reveals how neuroscience research, measuring brain activity, helps you to target the decision-making part of the brain. It is this, the primal brain, that encourages clients to make faster, better investing choices, he maintains. In the book he lays out specifics for employing brain-science findings to create messages that impact the primal brain and, at the same time, prepare clients to talk about solutions.

There are four steps to being more persuasive, he says 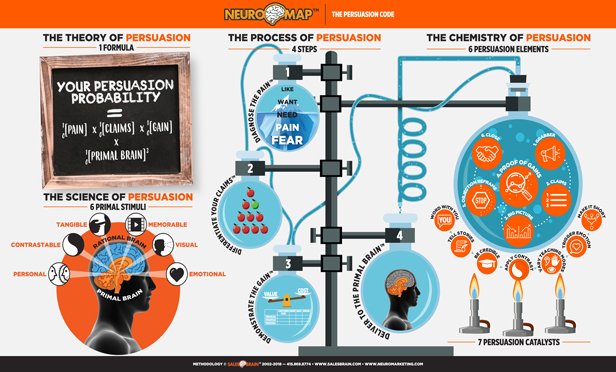 Morin illustrates the primal brain’s purpose with, for instance, this equation:  If Cookie + Candy = $1.10, “how much is the candy if the cookie costs $1 more than the candy? Not a dime! If that’s what you thought, blame it on your primal brain’s intuition and speed.”

In his book, “Thinking, Fast and Slow,” Nobel Prize winner Daniel Kahneman describes the tension between the primal brain and the rational brain. Morin takes another spin on this model and confirmed that persuasion has a scientific path in the brain. The idea is to target the decision-making brain — the primal brain.

Advertising great, the late David Ogilvy said that the only way you can effectively advertise or sell is by lighting a fire under people’s chairs and then presenting the extinguisher. If you talk about financial services to people who haven’t recognized that they’re at risk — by making bad decisions on their own or not having an advisor who’s qualified — they won’t take interest in what you’re saying.

“Make sure you’re speaking about the client’s pain — not just about your business. Be sure to trigger an emotional cocktail. Use the idea of contrasting: This is your life with a financial advisor; life would be risky without one. Make it tangible. Use analogies, which bridge what you already know to something new. Use familiar situations. Make it memorable. Make it visual. And provide concrete evidence to prove what you say.”

Differentiating your claim is about you. “People are buying you, the person. So your claim can be about what’s unique about you as an advisor that would help people trust that you can do a better job with their money than another advisor or themselves on their own.”

The take time to demonstrate the claim,  to produce the evidence that proves it. If the primal brain can’t grab, recognise and process that evidence, it will remain suspicious. We’re visual decision-making machines because vision is by far the most dominant of all the senses. Pictures and videos have a much faster and stronger emotional effect.

Finally, delivering your message to the primal brain could take many forms. A killer presentation, an addictive website. Or it could be in the form of a conversation. Props can be part of the delivery; or you can act out a minidrama, where you become the customer in order to reawaken their pain. This creates instant identification, empathy and trust.

“We recommend that people who sell face-to-face use props because objects are concrete and much more primal-brain friendly than words. For example, a financial advisor could use a raw egg to show the fragility of the client’s money and to introduce a dialogue about having a nest egg and protection.” says Morin.

And finally use simple language, never jargon. “Jargon will immediately turn off the primal brain. One thing people are good at is faking paying attention: They don’t want to share that they’re bored to death or that they don’t trust someone. So they’ll act as if everything is cool and at the end, say, “Thank you. Email me whatever information you have” — and then never talk to you again.”