Meituan Dianping is the world’s most innovative company for 2019 … followed by Grab and NBA, Disney and Stitchfix … how tech is reinventing the real world 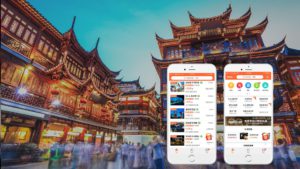 I always look forwards to Fast Company’s annual ranking of the World’s Most Innovative Companies. Whilst other sources, most notably Bain and Forbes, also produce rankings, largely analytically based on quantifiable factors like patents and profits, FC’s ranking is more inspiring. It’s about companies with a real vision, who are daring to challenge the norms, to drive fundamental change and progress.

Like the “Gamechangers” who I profile in my books and on this site, they are the shaker-uppers … the ones who see things differently, the ones who dare to challenge the fundamental rules of their sectors, and the ones who can change the world.

You probably haven’t even heard of this year’s top-ranked business. Yet China’s technology entrepreneurs are moving with a different rhythm to their peers in more established western environments. Like the big platforms of Alibaba and Tencent, Baidu and Xiaomi, China also has a huge start-up seen, where new ideas spread and evolve rapidly, where old boundaries are leapfrogged, and ambition is unlimited.

And it’s not just about China. Second in the ranking is Singapore’s Grab, more familiar as a delivery service that goes far beyond the likes of Uber. Maybe an even greater surprise is that the NBA comes in at number three. I was recently exploring the huge potential of digitally-enabled communities with a team of business innovators. Of all the examples we looked at, NBA came out as the most innovative, transforming the participation experience for millions of passionate fans.

I’m also delighted to see StitchFix enter the top 5, founded by a fellow astro-physicist, and now led by CEO Katrina Lake who thrives on disrupting the way in which people can now buy clothes. Apple, by the way, make it onto the list at #17, whilst many of the US’s most familiar giants – Amazon, Google, Microsoft and more – don’t even feature. You can argue the merits of any ranking, and the definitions of being innovative, but most of all, I love the list for his eclectic gathering of inspiring stories.

So here’s the top 5, and the full ranking:

Meituan Dianping is a Chinese company that aspires to be the Amazon of services. Its apps connect consumers with local businesses for food takeout, hotel bookings, and movie tickets, among other services. In 2018, it acquired the bike-sharing company Mobike (since rebrand to Meituan Bike) to offer local transportation services as well. Meituan’s tech platform uses data from its high-frequency applications to suggest its lower-frequency ones and inform users where to go next.

FC says that in the first half of 2018, the Chinese tech platform that expedites the booking and delivery of services such as food, hotel stays, and movie tickets, facilitated 27.7 billion transactions (worth $33.8 billion) for more than 350 million people in 2,800 cities. That’s 1,783 Meituan-enabled services every second of every day, with each customer using it an average of three times a week.

Anthony Tan, CEO of Grab, grew up the son of one of the largest automobile distributors in Malaysia. Now he’s head of Southeast Asia’s largest ride-hailing service. Grab doesn’t just connect people with rides, it also provides its drivers with digital wallets through Grab Financial, for storing their cash, taking out loans, and even picking up lunch.

FC describes how the Singapore-based ride-hailing company, forced Uber out of the region in 2018 and acquired its local operations. A few months later, it expanded its app to offer its 130 million users not only food delivery and travel booking, but also financial and other services. These efforts helped Grab hit $1 billion in revenue in 2018 and attract more than $3 billion in fresh funding to expand. Later this year, it’ll add healthcare services from Ping An, the Chinese digital health giant.

The NBA wants to be a global brand, and it’s working. More than a billion people around the world watch a league game every year, and it’s setting in-person attendance records as well. But its big idea is to bring basketball to fans no matter where they are, or on what kind of device they have. The league released the NBA AR App, launched an augmented reality pop-a-shot game, and experimented with the technology using such apps as Snapchat. It’s continued to invest in virtual reality as well, introducing the NextVR Screening Room, which lets fans view NBA League Pass games on a virtual movie theater-size screen.

FC explains how in an age of distraction, the NBA holds people’s attention. Last year, the league broke attendance records for the fourth straight season; its streaming service grew subscribers by 63%; and total revenue increased 25%. One reason: the year-old NBA 2K League, the first extension of pro sports into esports, which has 21 teams and games that stream on Twitch. “It democratizes our sport,” says NBA commissioner Adam Silver.

Disney is known for its iconic film and television, theme parks, toys, and characters. In 2018, Disney fully embraced the shift in consumer behavior toward personalized, on-demand entertainment. Before any other “traditional” media company, Disney began to remake itself for a direct-to-consumer future. Disney’s collection of premium global brands–Disney, Pixar, Marvel, Lucasfilm, ESPN, and ABC–give it the kind of content that drives consumers to sign up for streaming services.

FC recognises that there are plenty of venerable media empires aspire to be players in the streaming wars. However none is better positioned than Disney, which retooled its organisation to deliver its own video services rather than license content to Netflix. “We’ll do a better job than others,” says direct-to-consumer chief Kevin Mayer. “We know our brands viscerally.”

Stitch Fix is an e-commerce company whose users receive boxes, or “Fixes,” of clothing, shoes, and accessories based on their personal style and clothing preferences. This online personal styling service combines Netflix-style algorithms with human intuition and curation provided by more than 3,000 stylists who fine-tune each Fix. Together, they helps Stitch Fix identify which sizes will work best with each customer. When the company went public in 2017, it raised $120 million and was valued at $1.46 billion.

FC reflects how while working on a PhD in astrophysics, Chris Moody used supercomputers to simulate how galaxies crash into each other. For his first nonacademic job, he joined Square as a data scientist in 2013. About a year later, he started talking with some data-scientist friends who were employed at a startup called Stitch Fix, an upstart e-commerce service that delivered boxes of women’s fashion, known as “Fixes,” using a mix of algorithmic and human curation.

In depth stories of all the innovators can be found at FC. There’s also a fantastic breakdown into ranking by selective industry sectors, regions and other random ways of looking at the changing world of innovation. Here’s the full ranking of FC’s World’s 50 Most Innovative Companies 2019: