Guanxi … What can we learn from the power of personal relationships in Asian business culture? 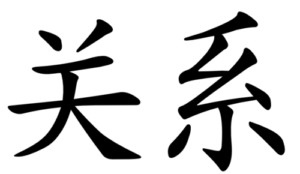 Guanxi loosely translates as personal connections, relationships or social networks. It implies trust and mutual obligations between parties, and it operates on personal, familial, social, business and political levels. Having good, bad or no guanxi impacts one’s influence and ability to get things done.

For example: If our guanxi is good, it implies we get along and are likely or expected to help each other out, perhaps because of shared ties, history or having done favors in the past. If a distributor or consultant does not have any guanxi – or has bad guanxi, with a customer’s purchasing director or a government approval authority, this implies it may be harder to get access to decision makers, obtain important insights, make a sale, or gain approval.

For the past twenty years, academics have spent considerable time trying to discern the impact of guanxi on business results. Last year a new research study covering 700 Chinese entrepreneurs evaluating their social networks (guanxi) and its impact on their business success. The paper stopped short of stating that guanxi causes business success in China, and it raised more questions than answers about the role that networks play in China business. Their findings in simple terms showed that higher trust and being strategically connected (having guanxi, or broker networks) was correlated to business success with those Chinese entrepreneurs.

Look at the US and Western Europe. Most estimates suggest 80 percent of jobs are found through personal networks. Companies often poach their competitors’ sales reps because of their relationships with key customers. Consultants with ties to regulatory agencies can often better navigate or even shape government policy. Washington is pretty much a revolving door of politicians turned lobbyists.

Guanxi exists everywhere, including the West. Chinese, and even Western expatriates who have spent their careers in China, often miss this fundamental point , simply because they haven’t spent much time doing business outside of China.

1. Guanxi is an ingredient to business success, but varies by sector and even geography

Thoughtful investors in China get scared if guanxi is a company’s sole competitive advantage, or even business model. The importance of guanxi is relative and depends heavily on industry, geography or the nature of the business.

Heavily regulated industries or those that are strategic to China’s national interest, like banking, health care or security, are more subject to non-market forces. Good guanxi with authorities or state-owned companies may be critical to successfully doing business. It’s not that different than a Chinese pharmaceutical firm in the US, which needs to recognize the importance of shaping policy given that its US competitors may have deep relationships with the Food and Drug Administration.

Likewise, China is diverse. Some regions, like Beijing, Shanghai, or Shenzhen may share more in common with international business practices. Inland regions in the West, provinces with state-sector involvement like the Northeast, or even regions like Jiangsu or Fujian that were once dominated by small, family-run businesses, may be subject to more traditional business practices, where guanxi stills plays a role.

On a personal level: the key is to deepen trust and create mutual benefit. People are still people: we like and help those similar to us, who boost our ego or make us look good, who are helpful and provide benefits, or who make us feel we are part of a larger meaningful cause. Rather than focus on differences, build on similarities, paying attention to small but subtle cultural differences. China is changing rapidly,  and attitudes differ widely by age, with younger Chinese less bound by traditional obligations.

On a business level: as one executive said, “I’ve never met a distributor who says they don’t have good guanxi in China.” Look deeper. Understand the sector and geography to gauge how important guanxi may be with suppliers, key partners and customers. Having a business meal or drink, long viewed as mandatory to China business, may not even be necessary. Technological turbulence and competition intensity may even lessen the impact of guanxi.

On a sector or governmental level: foreign firms may never be able to generate the same level of trust and ties with authorities that local firms can. That sometimes may be an advantage, as it does not bind western companies and executives to the same norms of behavior. In building relationships with authorities, work across institutions rather than with one individual. Have a strong non-market strategy in China and someone dedicated on the team to spearheading it. As one study cited: “While business ties remain a valuable strategic tool in China, the importance of government ties is time-variant and has been declining with the development of the institutional environment in China.”

3. Understand and manage the downsides of guanxi

The downside of guanxi is that it is often associated with corruption and can lead to dangerous reciprocal obligations and collective blindness. The upside of Xi Jinping’s rule has been a heavy focus on rooting out corruption, which has had a sanitizing effect on government officials and company executives, many of whom currently operate with almost as much caution and compliance as western executives, who are subject to the Foreign Corrupt Practices Act (FCPA) and the UK Bribery Act.

Guanxi can be built, but it must be managed carefully. An overreliance on guanxi is a convenient excuse for not doing the hard work to convince customers, employees and partners of the business benefits of cooperating.

Guanxi is not magic dust

Consider guanxi as providing a leg up – the insight that it can provide, or the good will it can generate to help seal a deal – but not the only leg to stand on. Business in the East, as in the West, is about people and relationships, but an over-reliance on relationships can kill, as it did with Bill.

More research will shed light on guanxi. This is a tough challenge given China’s size, complexity and the speed of change. At the same time, the West needs to realize that crony capitalism, creeping into the US, might signal that guanxi and relationships are a bigger driver of business success in the West than people want to believe.