Globalisation 4.0 … Is it an unstoppable force, fuelled by dreams and technology, or should we take back control?

Globalisation used to be exciting.

To be able to connect with other people and nations across the world. International travel was a positive experience. Exploring incredible places, and diverse societies. The opportunity to share our cultures, perspectives and dreams. The desire to support each other, from escaping poverty to enabling success. Incredible art from Asia, music from Africa, food from the Americas. Multi-ethnic communities became the norm. Most people would live in at least three countries during their lives. And the opportunities for business become obvious too. Increasingly enabled by the new generation of fast and connected technologies.

But then globalisation became difficult.

The British narrowly voted for Brexit, to disassociate themselves from a connected world. Crazy. Trump came to power, on a promise of blinkered xenophobia. Shocking. We could also see wider effects, from climate change to new conflicts, rising inequality and new extremism. Governments across the world swung towards nationalism. New polarities and prejudices rapidly emerged. Few of them good. Globalisation was blamed for many of these shifts. For me, it was incomprehensible. But I try to understand, even if I don’t like or desire it. Of course you could argue it is nothing new, as the likes of Genghis Khan have been here before. Yet today globalisation is an unstoppable megatrend but also a huge challenge. Which is why it makes a fascinating theme for this year’s meeting of minds at the World Economic Forum 2019 in Davos.

Klaus Schwab kicked off this year’s forum by reflecting on the history of a globalising world. After World War II, the international community came together to build a shared future. Now, it must do so again. Owing to the slow and uneven recovery in the decade since the global financial crisis, a substantial part of society has become disaffected and embittered, not only with politics and politicians, but also with globalization and the entire economic system it underpins. In an era of widespread insecurity and frustration, populism has become increasingly attractive as an alternative to the status quo.

But populist discourse eludes – and often confounds – the substantive distinctions between two concepts: globalisation and globalism. Globalisation is a phenomenon driven by technology and the movement of ideas, people, and goods. Globalism is an ideology that prioritizes the neoliberal global order over national interests. Nobody can deny that we are living in a globalized world. But whether all of our policies should be “globalist” is highly debatable.

After all, this moment of crisis has raised important questions about our global-governance architecture. With more and more voters demanding to “take back control” from “global forces,” the challenge is to restore sovereignty in a world that requires cooperation. Rather than closing off economies through protectionism and nationalist politics, we must forge a new social compact between citizens and their leaders, so that everyone feels secure enough at home to remain open to the world at large. Failing that, the ongoing disintegration of our social fabric could ultimately lead to the collapse of democracy.

Moreover, the challenges associated with the Fourth Industrial Revolution (4IR) are coinciding with the rapid emergence of ecological constraints, the advent of an increasingly multipolar international order, and rising inequality. These integrated developments are ushering in a new era of globalization. Whether it will improve the human condition will depend on whether corporate, local, national, and international governance can adapt in time.

So how do perceptions of globalisation differ from country to country?

Raconteur highlights used YouGov survey data from 19 countries. Support for globalisation ranges from 37% (France) all the way to 91% (Vietnam), representing a very diverse array of attitudes towards the topic.

Based on these 19 countries, at least, the places that feel the most positive about globalisation tend to be emerging markets such as the Philippines (85%), India (83%), and Indonesia (72%). These are countries where the pie is getting bigger at a rapid rate, as economies expand from access to increased global capital and trade.

Though it’s true that these developed countries are showing skepticism, it’s also clear that the Western world is very split on the topic. European countries like Germany (60%), Denmark (68%), Sweden (63%), and Finland (56%) all saw a majority of respondents in favour of globalisation. 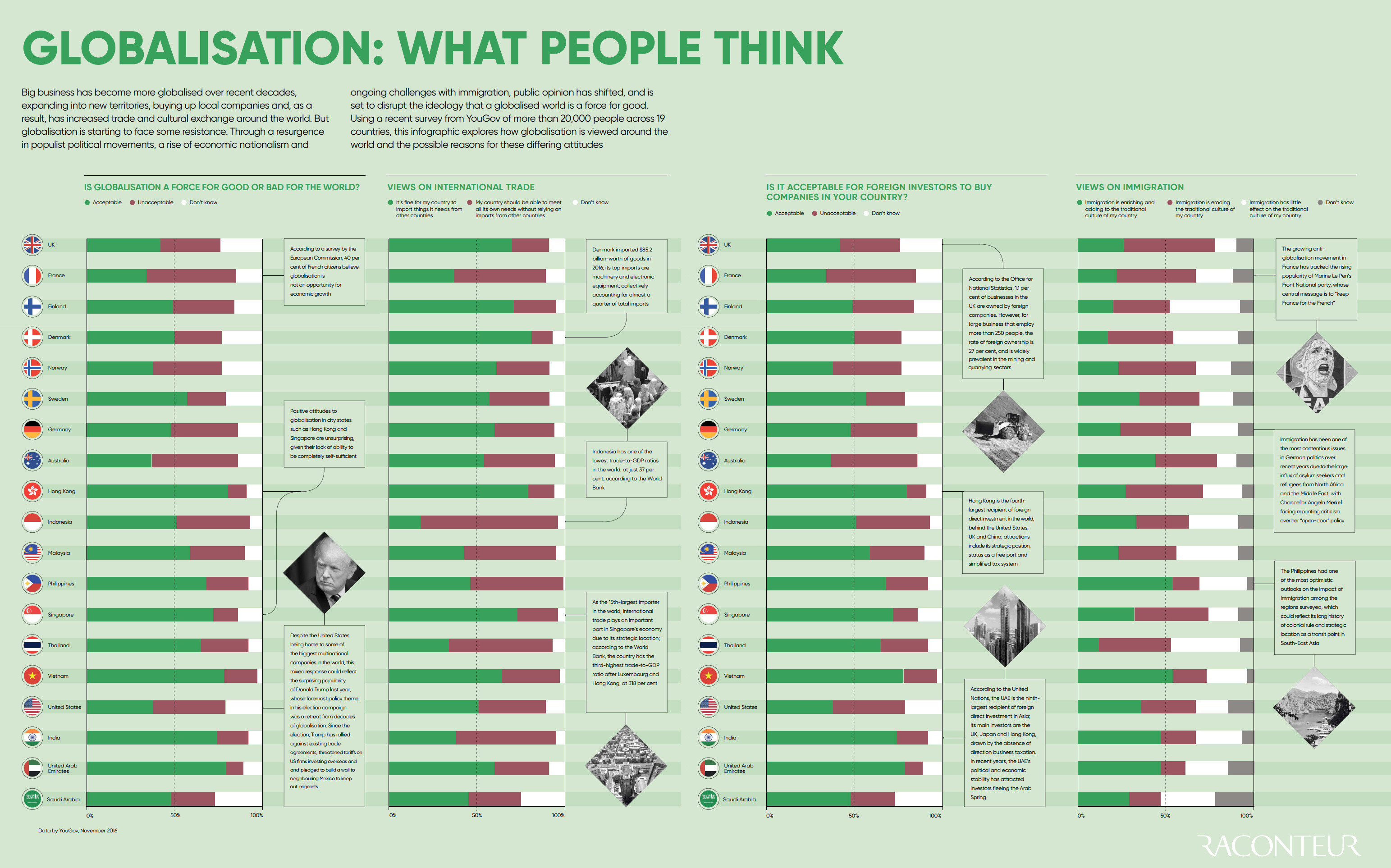