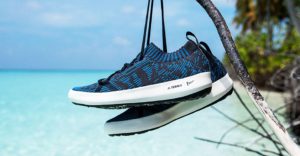 Running shoes used to be a fairly simple choice – Adidas or Nike – with a bit of Asics and New Balance thrown in.

My first running shoes were Adidas, back in 1978, although I was soon inspired by the Olympic exploits of Coe and Ovett, to try the swoosh. Innovations from Bowerman’s waffles and Air soles were met by Torsion bars and Dellinger web midsoles, as the two brands battled for market leadership. Indeed reading Phil Knight’s biography over the summer, he was obsessed with beating his German rival from the earliest days.

More recently science has taken different directions, tales of the Tarahumara Indians and their minimal shoes drove a barefoot trend, from Vibram socks to Nike Frees. And then Hoka One One flipped the other way, maximising the midsole cushion, and others followed. Adidas has focused on sustainable innovations, like the Parley collaborations to save the oceans, with a more campaigning approach, whilst Nike have been equally considered, its Flyknit technology seeking to eliminate waste and maximise fit.

Of course, comparing brands has become more difficult as product ranges have diversified across multiple sports, and into the world of leisure, or athleisure as we should call it. This has required choices but also dedicated teams within each brand to keep pace with changing sports, consumers and competitors. Multisport brands have the challenge of staying relevant to each sport, under one monolithic brand, whilst new entrants can focus on niche segments and become experts in their chosen fields. And its not just about shoes anymore. Indeed, apparel is often far more emotionally relevant to consumers in their choice of brands, although shoes still count for technical performance.

In the last couple of years, the market has really exploded with many new brands targeting niches and changing consumer behaviour. Sketchers for example recognises trainers as the walk to work shoe, and developed some fantastic models that even won the New York marathon. Meanwhile brands like On Running from Switzerland with its cloud running device is more geared to trail and mountain runners. For the gym user, brands like Under Armour have become a serious mass market rival, whilst specialist brands like Gymshark have targeted millennial audiences.

Some brands, like Ashmei, have refused to compromise on the mass market design approaches that seek to achieve specific price points, at the expense of the best fabrics and production techniques. Instead Ashmei seeks to target the discerning running, willing to pay twice as much for the best they can get. At the same time, there is a spartan instinct in many runners, seeking our the retro designs of the 1950s and 1960s when cotton was best, and clothing was simple. Consider Boston’s Tracksmith or Richmond’s Iffley Road. Some are fashion-centred like Satisfy, whilst other’s have a higher purpose, like Janji run in pursuit of clean drinking water.

However the real innovation, and profit margin, is likely to be developing more holistic relationships with consumers. Nike have done this best. It’s fitful but eventually fruitful collaboration with Apple, has seen it take technologies seriously, and the Nike+ Fitness Club has become a killer app on the Apple Watch. The fact that membership then links directly to Nike’s online store, enhances the relationship and benefits. Nike’s Breaking 2 project, seeking to create the first sub 2 hour marathon, was much more than a promotional event.

The concept of putting sensors into running shoes isn’t new. Back in 2012, Nike launched a smart shoe – the Nike+ Training Shoe – that was capable of reading a range of foot-based data including how many times your feet hit the ground, how long each foot was off the ground and where the contact was made. Since then we’ve seen the Under Armour Speedform Gemini 2 & 3 and the Altra Running IQ follow suit, attempting to popularise form and performance-tracking running shoes.

Under Armour the launched its latest chip-laden shoes the HOVR Phantom and the HOVR Sonic. Each of these shoes comes with a lightweight chip, complete with accelerometer, built into the thickest part of the right-shoe midsole. This can automatically detect when you start running and records a number of key running metrics, including distance, stride length and cadence, without the need for a phone. The data will also be synced to Under Armour’s MapMyRun app via Bluetooth when you get home.

Then there’s Sensoria, which up until now offered real-time tracking technology in the form of sock-worn sensors. In 2018, it’s moving this technology on a step, releasing its own smart shoes and pairing three textile sensors built into the sole, which can detect data about the way a runner’s foot makes contact with the ground, with a removable, reusable Sensoria Core sensor.

Garmin released a new form-tracking footpod and there is also Shft IQ and Runscribe. There is also the rise of arguably the most compelling new run tracker since Lumo Run in the shape of Stryd, another pod that clips to the outside of your shoe to deliver a huge range of form data and finally give runners access to the power output number that cyclists have enjoyed for ages.

Right now sensors worn outside our shoes are more popular with runners than shoes that have them built in. And that’s not going to change anytime soon according to Angus Nelson, cofounder at Stryd. When it comes to chips in shoes, he says there are a few challenges that need to be conquered.

However there is still plenty of space to innovate, and ideas from adjacent categories – such as cycling (think of Rapha’s cycle clubs), yoga (consider Lululemon’s values-driven mantra), skateboarding (learning from cult brand Supreme) – could spark new ideas and directions for new growth.

Adidas … reinventing the shoe with 3D scanning, 3D printing and the Speedfactory

Hoka One One … the extreme cushioned midsoles

On Running … cloud running from the Swiss Alps

Brooks … happiness for the real runner

Senoria … smart socks with pressure sensors and wifi, to track how you run

Ashmei … no compromise on quality for price

Tracksmith … finding the soul of the runner

Sketchers … walking shoes for running too

Under Armour … gym wear trying to be serious