Google’s Matt Brittin talks with me about leadership and innovation, and business as a force for good, at the Thinkers50 European Business Forum 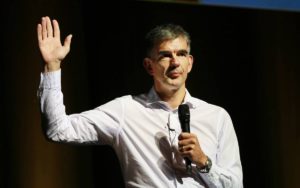 It’s easy to have a go at Google. Or should we say Alphabet? It’s a huge business, incredibly successful over the last 20 years, and relentlessly innovative in harnessing the power of information and technology, to drive progress.

Google has become the indispensable tool in our search for information everyday, so successful that it has through its own competitive performance achieved an almost monopoly in online search. From Android to Chrome, Waze to YouTube is has developed or acquired its way into an enormous complexity of ways to improve our lives. And its 85,000 employees generate $110bn revenue, driving a $733bn market cap.

He’s not had an easy time of late. Most famously he has led Google’s front against charges of tax avoidance. Appearing at a UK government select committee he argued that technically Google made no sales in the UK, therefore it owed no tax (which might be true as they are all routed through alternative low-tax domains, and so whilst the law remains like it does, it technically doesn’t!).

He made even bigger headlines by not being able to tell the committee how much money he earned (which again, is quite possible in a world of multiple incentive programs, where base salary becomes one component of total remuneration). Anyway, those anecdotes are just to illustrate the types of issues he grapples with.

Matt joined me at the Thinkers50 European Business Forum 2018 to talk about how business can have more social impact. We actually live in the same English town, about 5 minutes from each other, but here we were on stage in Odense Denmark, at Europe’s premier business event, bringing together the world’s top academic thinkers and European business leaders.

You can watch the video of our session here:

He’s actually an incredibly normal, genuine and thoughtful guy. Who wants to ensure that the organisation that he is responsible for, really is a force for good in a complex and difficult world. He talked about practical things, like YouTube’s ability to empower all of us to make things, or inspire us by accessing new ideas.

Matt also talked about the huge amount of profits which Google’s parent company reinvests in research and development – such as Google X’s array of “moonshot” projects – in areas such as cures for cancer, anticipating natural disasters, and better access to education for billions of people across the planet.

Matt joined fellow speaker Jimmy Maymann, former EVP of AOL, and myself for a discussion on the challenges for business leaders today, and how to really get the right balance between brands and media that seek to optimise their commercial impact, whilst also leveraging their power and reach for more social impact.

At the end of the session we gave Matt a huge birthday cake. On this day 2o years ago, Larry Page and Sergey Brin officially launched the Google brand. He blew out the candles making a wish for every business to be more successful in finding ways to create a more positive impact in our world.

Here is a short recap of the Thinkers50 European Business Forum 2018:

Matt Brittin is also an impressive guy in his personal life. He rowed for Great Britain from 1985 to 1989, winning a bronze medal at the World Rowing Championships in 1988, and also represented Great Britain in rowing at the 1998 Seoul Olympics. Age has not diminished his sporting aspirations, and in 2011 he cycled from Land’s End to John O’ Groats.

Here are some more of his videos: