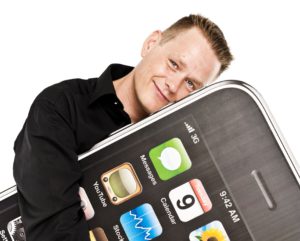 Martin Lindstrom is a great guy, a good friend. His perceptive insights into the consumer world engage his audiences through a mixture of movie star performance and very simple storytelling.

The last time we met was on a stage in Zorlu Center, Istanbul. Martin was explaining how he had gone a little cold turkey. In an attempt to overcome his addiction to his mobile phone, he was experimenting with life without it. The experience was liberating, although at times it inevitably meant he felt a little detached from the speed of everyday living.

A year later we are sat in the wonderful new Odeon Center in Odense. Martin is on a rare trip back home to Denmark, having just called in to see his father. Whilst he grew up an entrepreneurial Dane, and as a teenager became the youngest ever employee of Lego, he has gone on to feature in Time Magazine’s 100 most influential people, have his own US TV show, and write some great books.

The biggest benefit of not having a phone, he says, is that it gives you time to lift your head up, to observe all the smaller things around you. What are people doing, how do they behave, respond, look, react, interact? For somebody who makes a living from making sense of people, it makes sense. And for Martin, it means he can engage better in more meaningful conversations, when you actually do make contact with people, but not by phone.

I also asked him how he feels about being back in Denmark, where Odense has become the home of business thinking in Europe, and host of the annual European Business Forum. Whilst he loves being back (he lives in Australia, when not on a plane), he feels that the Danish psyche somehow stops it from stepping forwards with its ideas and innovations to have most impact on our world.

Here’s Martin’s keynote at this year’s Thinkers50 European Business Forum, where he tells the story of a changing consumer world, and how brands and retailers are responding to those changes. He also joins me at the end to talk more personally:

Martin Lindstrom’s own story began as 12 years old kid, lying in bed with an illness that gave him a new power – the power of observation.

“As a kid growing up in Denmark, I had one main passion: Lego.  I built and slept on a Lego bed. The family garden was my very own Legoland, attracting visitors from near and far – including some Lego lawyers! Then, of all the children in the world, they gave me the first green brick in the collection! That’s what got me started in the crazy world of branding, marketing and advertising.

Later, I started advising Lego on their overall branding strategy in 2004. From the mid-1990s, Lego began moving away from its core products – building blocks – and focused on theme parks, clothing, video games, and retail stores.  They were convinced that thanks to computers and video games, the new-generation of kids demanded instant gratification, lacking the patience or the attention to engage with complex building projects. “Big data” studies suggested that future generations would lose interest in Lego.

But the insights (“small data”) told Lego a different story. Lego learned from a 14-year Lego fan that his skateboard exploits were measured (and honoured) by the appropriate wear and tear on his shoes.  The worn look of the sneakers was a badge of honor. That’s when Lego realised that children attain social currency amongst their peers based on the mastery they displayed of their chosen hobby.

The result was that Lego refocused on its core product, and created more challenging, labour-intensive, construction challenges. Customers, it turned out, valued a challenging Lego experience.”

In a world where – according to research by McKinsey – 95% of transformation strategies fail, we need to examine why we are getting it so wrong. The answer may surprise you.

In todays world it is easy to feel overwhelmed with data. IBM reported recently that 90% of all the data we have in the world today was created in the last two years. That is a staggering statistic and explains our obsession with Big Data.

In our quest to make use of this big data, however, we often lose sight of what Martin calls “Small Data”, which he defines as the data that tells us what people like and don’t like, what they need and what they want. Big Data gives us results, but rarely shows the reasons behind them.

One example is when Martin went back to Lego, as the toy giant saw a drop in its fortunes.

Managers assumed youngsters were no longer interested in spending time putting plastic bricks together. Instead, it seemed that kids wanted the fast, easy thrill that came from video games, which were far more popular. Lego’s answer was to reduce the number of bricks in its toy sets and made the bricks bigger. Sales plummeted.

So, Martin and his team were tasked with getting into the minds and hearts of Lego consumers, and help turn around the brand.

The team visited and observed the type of kids who would normally use Lego and came across some interesting insights. But the ‘eureka’ moment happened when they talked to a boy whose prize possession was a dirty, worn-out pair of sneakers. Why was this? It seemed an unusual thing to be so proud of. The boy claimed to be one of the best skateboarders in his neighbourhood, and the sneakers were proof that he had achieved that status because the sneakers were scarred a scuffed from so much use. It had taken him hours and hours of practice, determination and application to become the best skateboarder in town, so his sneakers were like a trophy.

Kids, it seemed, were not shy of putting in the hours and the mental effort to win. Indeed, they prefer a difficult challenge that brings kudos amongst their peers.

Lego went back to the drawing board, literally, and put more and smaller bricks back into their sets. They also created a culture around the brand with The Lego Movie, and sales rocketed to an all-time high.

It was only when Lego looked past the Big Data and examined the impulses that made consumers want to use their product that the true transformation happened.

That’s not to say that Big Data is useless and should be ignored. Far from it. Martin suggests the ‘sweet spot’ comes from using Small Data to understand the causation of what the Big Data tells us. You start with the hypothesis and Small Data tells you the thinking behind it.

Over the two days of this year’s Thinkers50 European Business Forum I talked with some of the world’s top business academics and Europe’s business leaders. From Roger Martin to Whitney Johnson, Alex Osterwalder to Don Tapscott, Jim Snabe to Matt Brittin, and many more. Here’s a summary: