Roger Martin calls for a “scientific revolution” in business thinking … organisations as systems, and strategy as execution 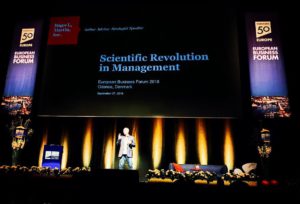 The European Business Forum is the premier meeting place for business leaders in Europe. It brings together the continent’s top business people with the world’s leading management gurus in “the Davos of business thinking”.

The forum is hosted by Thinkers50, the world’s leading network of business thinkers, and located in Odense, Denmark. The home of Hans Christian Andersen, and now one of Europe’s leading robotics hub, is the perfect place to write the story of the future.

In this year’s European Business Lecture, Roger Martin called for a “scientific revolution” in business thinking … with a dramatic shift to organisations as systems, strategy as execution, and projects as the norm.

Roger Martin is the world’s #1 business thinker, as ranked globally by Thinkers50, and argued the need for three “scientific revolutions” in business thinking.

He started from Thomas Kuhn’s view that in all fields, the majority of people in the field converge over time on a dominant way of conceptualizing the field. When that happens, all the thinking and research in the field works away at honing and refining the dominant model, what he called “normal science.” But over time, application of the model in the real world results in anomalies – things that you wouldn’t expect based on the dominant model, often the opposite of what the model would predict. When enough of those anomalies occur, someone in the field breaks rank and comes up with a very different model that addresses the anomalies.

The three scientific models are:

Martin believes that this is a ‘scientific revolution’ that produces a ‘paradigm shift’ or a step-function improvement in the results that the new model produces in comparison to the old dominant model. It tends to be a bloody war around the time of the ‘scientific revolution’ as the practitioners of the dominant model attempt to defend it against the paradigm shift.

He argued that we need to switch to:

He said in business, we are seeing the degradation of effectiveness and the production of deeply problematic anomalies with respect to three dominantly-held business models. He showed the model and illustrated the anomalies that they are producing.  And be argued for a different model to replace each. Of course this is controversial because most business people inevitably leap to the defense of the dominant model – and argue as they always do that the dominant model just isn’t being applied properly or intensively enough.

The speech marked the climax to two days of active and stretch thinking by many of the world’s top business academics – including Canada’s blockchain guru Don Tapscott, to Switzerland’s business model champion, Alex Osterwalder – and Europe’s business leaders – such as Google’s President in Europe, Matt Britten, and Siemens and Maersk’s chairman Jim Hagemann Snabe.

Roger serves as the Institute Director of the Martin Prosperity Institute and the Michael Lee-Chin Family Institute for Corporate Citizenship at the Rotman School of Management and the Premier’s Chair in Productivity & Competitiveness. From 1998 to 2013, he served as Dean. In 2013, he was named global Dean of the Year by the leading business school website, Poets & Quants. He has published 11 books the most recent of which is Creating Great Choices (2017). Roger is a trusted strategy advisor to the CEOs of companies worldwide including Procter & Gamble, Lego and Verizon.

Other speakers at this year’s European Business Forum included: