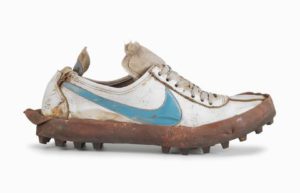 When I was 10 years old, I joined the school running club. Mike Henry, the teacher at Thomlinson Middle School in Rothbury, had a love of running and took a group of 15-20 of us for a 3 mile run every Monday, Wednesday and Friday lunchtime. Along the country lanes we would go, passed the Whitton Tower farm, and to the turning point at Carterside Farm. For the first year, I was always at the back of the group, struggling to keep pace with my more talented peers. On my feet were a pair of Adidas trainers, more like tennis shoes, and probably the cause of many injury problems in future years!

After a while I got fitter, and discovered an aptitude and ultimately a lifelong passion for running. In September 1978 my first ever race was on the horizon. I’d been selected to run for the school, against other local schools in the Morpeth area. Mike suggested I should invest in some new footwear. It would be a hilly course and I really needed some proper running shoes. He told me about the Wally Waffle. A specialist children’s running shoe from a new American sportswear company called Nike. That Saturday, I persuaded my parents to part with the £9.99 for my first shoes with a swoosh. I loved them. They were light and fast. And I even saw my hero Brendan Foster wearing similar shoes on television. For the last 40 years (Is it really that long?!) I have continued to run, and worn nothing but Nikes though that time. I must have bought over 100 pairs of Nike trainers, racers, and spikes over the years!

This summer as I read Nike founder Phil Knight’s autobiography, Shoe Dog, all those moments came back to me. It was quite incredible to think that at the same time I was buying my first Wally Waffles, Phil and his maverick team of “shoe dogs” in Beaverton Oregon were desperately trying to grow their start-up company, Blue Ribbon Sports, into an international operation. Having started as an importer of Tiger shoes from Japan, then falling out with them and creating their own line with a $35 swoosh logo, they were desperately trying to balance cashflows, product innovations, internal relationships, and lawsuits too. To me they were just cool trainers, but now I realise what went in to making them a reality.

The story of Nike

Shoe Dog is addictive as both autobiography and business book, and then as an economics book, it is both educating and inspiring.

It is a first-person chronicle of Phil Knight’s founding of Nike, or rather its predecessor Blue Ribbon Sports in 1962, ending with Nike’s initial public offering in 1980, mixing insight and inspiration, and stories about fire drills that involved jumping out of his bedroom window with a bedsheet while his mother timed him.

As way of a quick summary, here are a few anecdotes from the story of Oregon-trail entrepreneurialism which became a cut-throat international business.

Knight’s running talent: Frustrated by his own inability to break 4 minutes for the mile whilst at the University of Oregon, Knight turned to business. More strictly, he first trained to be an accountant, getting a job with what is now PriceWaterhouseCoopers. He also lectured on finance at the local college, which is where he met his wife Penny.

Bowerman’s waffle iron: USA track coach and Knight’s co-founder Bill Bowerman was always tinkering with shoes. His famous waffle-iron inspiration for a studded sole actually emerged because of his obsession with creating a authentic running track. Knight described getting the waffle sole patented as the most magical moment in Nike’s history.

Nike v Adidas: Of the 1970s, Knight writes, “I was developing an unhealthy contempt for Adidas. Or maybe it was healthy. That one German company had dominated the shoe market for a couple of decades, and they possessed all the arrogance of unchallenged dominance. I despised them.” Today Nike is twice as big as Adidas.

Inspired by Japan: His frequent business trips to Japan in the ’60s and ’70s endeared him to its people and culture … “I sat, contemplative, reverent, beneath swaying ginkgo trees, beside a beautiful torii gate.” He started by importing Tiger (now Asics) shoes, and eventually developed his own brand (Nike) made in Japanese factories, financed by Japanese trading companies.

Nike or Dimension Six: The name “Nike” came to Jeff Johnson, Blue Ribbon Sports’ first full-time employee, in a dream (“Any good brand should be short with a click in it – like a K or X”). But it  took an enormous effort by everyone else to convince Knight that his preferred brand name, “Dimension Six,” was “unspeakably bad.”

The annual Buttface: Knight held a regular retreat called “the Buttface” for his close team, a few days of problem solving and planning the future (alongside “some serious drinking and partying”). Apart from these days, he largely left his people to work on their own, focusing on the outputs not how they did it. He always worried about his leadership style being too hands off, but his people thrived on it.

The Canadian economist Reuven Brenner once referred to macroeconomics as “a tautology and a myth, a dangerous one at that, sustaining the illusion that prosperity is necessarily linked with territory, national units, and government spending in general.” Phil Knight would likely share Brenner’s contempt for the macro side of economics.  He’s lived Brenner’s quote, and much more.

In Knight’s case, Nike, is a creation of his passion for running, persistence to create a business, and creativity in finding a way over a million hurdles on the way.  Just about every item ever produced by the shoe company was manufactured somewhere not the United States, not to mention that Knight’s financial savior in Blue Ribbon’s less prosperous days was a Japanese trading company, Nissho.

Interesting about Shoe Dog is that it pretty much ends in 1980 when Nike was taken public.  On that day Knight was worth $178 million, while many of his early employees had holdings in the $6 million range.  To Knight, Nike’s early history, one defined by near constant fear of bankruptcy, was the story to tell.  Despite the agony, despite the countless times his creation nearly died, it’s this part of the story that Knight says he would live again if he could.

Knight writes about how some of his first employees, Jeff Johnson (employee #1) and Bob Woodell, still visit the company’s Beaverton campus to tell stories of the early days.  How lucky Nike employees are that they get to hear about how it all began in Knight’s parents’ basement, all of this before Blue Ribbon could afford to rent a space connected to a raucous bar, with broken windows that the fledgling company lacked the funds to fix.

Knight’s seeks to nourish Nike’s culture, and also to hopefully remind the 5,000 well-to-do employees in Beaverton that somewhere there’s a “shoe dog” with drive and ambition similar to Knight’s.  This entrepreneur is working feverishly to knock Nike off of its lofty perch much as Nike did formerly #1 Adidas.  No doubt it’s easy for the employees of today to forget how very ephemeral success is.  Johnson’s and Woodell’s stories, along with Knight’s amazing book, hopefully remind the employees of this truth, all the while enhancing their already bursting pride in what they’re a part of.

From an economics standpoint, Knight’s tale of nearly always being in debt for the first 18 years of the company’s existence, of always fearing the one incorrect move that would bankrupt Nike, is instructive on its own. He stared failure in the face nearly every day from his company’s creation in the early 1960s right up to 1980.

Many will remember the negative moments in Nike’s journey, such as the sweatshops around the world that “exploited” poorly paid employees.  Yet when Nike arrived in Vietnam the workers in its factories were walking to work.  Once in Knight’s employ they were soon enough riding bikes to work, then scooters, then driving automobiles.  As Knight notes, “Whenever reporters said a factory was unsatisfactory, they never said how much better it was than the day we first went in.” Interesting about Nike’s overseas factories is that the company always paid above the prevailing market rate; sometimes so much above it that Nike, according to Knight, was “disrupting the nation’s entire economic ecosystem.” Translated, there were times when “exploited” Nike factory workers were earning more than doctors in the impoverished countries that Nike entered.

About early finance for his company, Knight dealt with the very local First National Bank of Oregon.  He recalls that banks, including First National, were very risk averse back then.  Suffocatingly so.  “They wanted you to never, ever outgrow your cash balance.” Not much has changed since.  Knight reports that around the founding of Blue Ribbon, 26 out of 27 companies failed.

Lest we forget, Knight spent the first eighteen years of his time running Nike worrying on a daily basis that his company would soon go under thanks to a lack of cash.  This is important because Knight plainly spent a lot of the company’s limited funds traveling on the other side of the world in search of factories capable of making his shoes.  He wouldn’t have done this if there had been manufacturing capacity in the States capable of and willing to make the shoes for him here.

Why did Knight succeed? It’s hard to say exactly.  He admits to being intensely competitive, doesn’t hide the truth that his boys suffered his devotion to his “third child” through lost time with their father, he was courageous and full of vision, etc.  All those things make sense, but it also can’t have hurt that Knight had a major chip on his shoulder.  And with the latter in mind, we’re constantly told that discrimination is harmful, that it discourages the otherwise talented.  Really? What stories of entrepreneurs almost invariably tell us is that these outsiders were and are discriminated against, almost as a rule.  Precisely because they’re doing things differently, few take them seriously. The discrimination fuels them. As Knight recalls about the employees of a much younger Nike, “Each of us had been misunderstood, misjudged, dismissed.  Shunned by bosses, spurned by luck, rejected by society, short-changed by fate when looks and others natural graces were handed out.  We’d each been forged by early failure.” Yes!