The world seems chaotic. Polls failed to predict that Trump would win. Airbnb is worth more than Hilton. #MeToo is taking down powerful, previously untouchable heads of industry. But when you step back from the chaos, you can notice there’s an underlying force at work: “new power.”

By understanding new power you can reshape the world around you. The future is a battle for mobilization. Those who flourish will be those best able to channel participatory energy — for the good, the bad, and the trivial. And this battle will have big implications for people, organizations, and for the world at large.

The rules have changed.

It is a guide to navigating the 21st century, exploring the unexpected ways power is changing— and how new power is reshaping politics, business, and life. It explores on the cultural phenomena of our day, from #BlackLivesMatter to the Ice Bucket Challenge to Airbnb, uncovering the new power forces that made them huge.

Drawing on examples from business, activism and pop culture, the book explains how to build new power and channel it successfully. They also explore the dark side of these forces: the way ISIS has co-opted new power to monstrous ends, and the rise of the alt-right’s “intensity machine.”

Here is an extract from The New York Times’ review of the book:

Once upon a time, power was held in the hands of a small elite. This elite occupied the commanding heights of society and controlled big, top-down organizations. It dropped products and messages from on high, and the rest of us passively consumed them.

Then along came the internet. Suddenly, information was dispersed across self-organizing, open-source networks of citizens who had the ability to collaborate, share and shape their world. Hierarchies were smashed, the wisdom of crowd was applied and transparency reigned.

Ok, that didn’t really happen. The first dreams of the tech revolution didn’t come true. Sometimes it seems power was just redistributed from one set of massive organizations to others — Amazon, Facebook, Spotify. 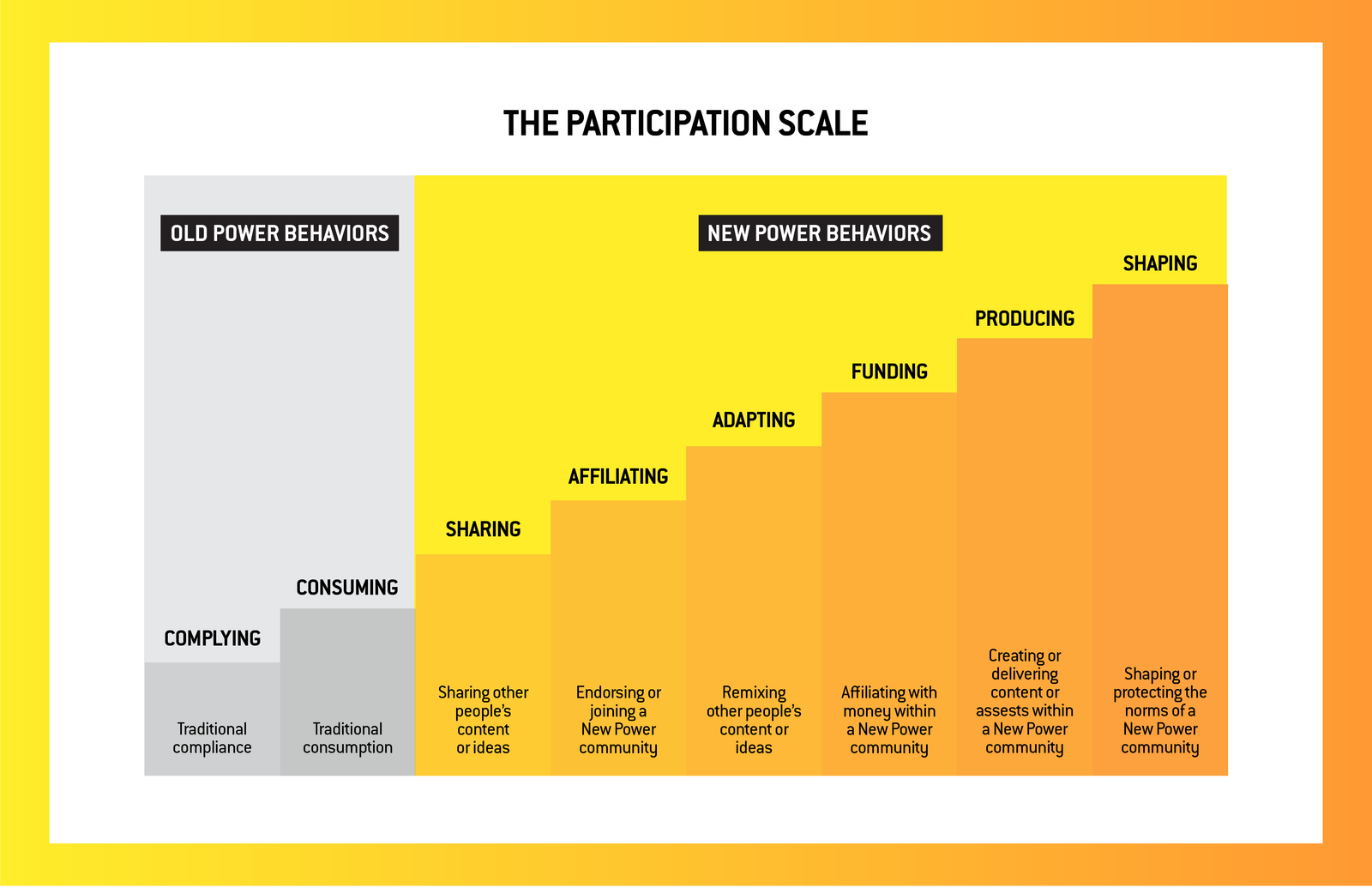 But something has changed. We have seen an explosion of new social organisms that don’t look like the old ones: Airbnb, Etsy, Black Lives Matter, #MeToo, Blockchain. If power in the “greatest generation” looked like organisation men running big institutions, and power for the boomers looked like mass movements organized by charismatic leaders like Steve Jobs and Barack Obama, power these days looks like decentralised networks in which everyone is a leader and there’s no dominating idol. 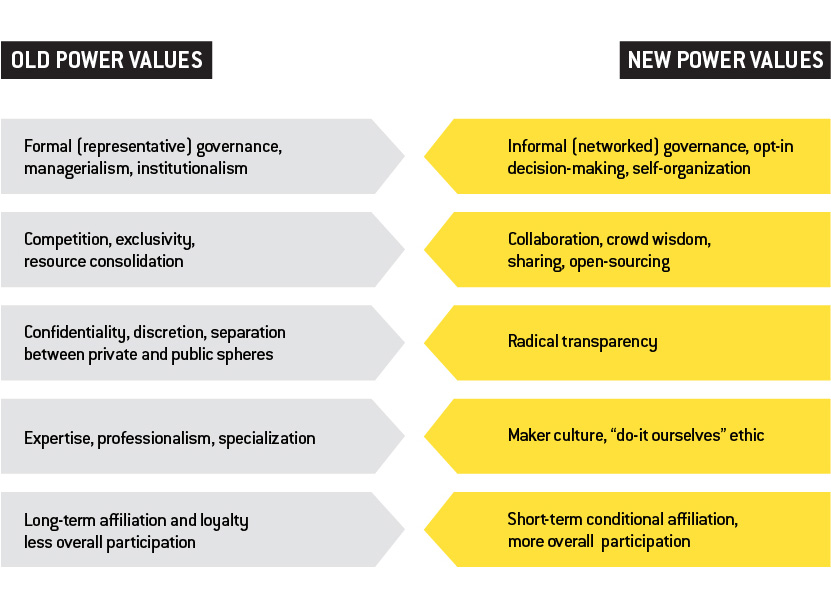 Power structures are in serious flux. The best window I’ve seen into this new world is a New Power by Jeremy Heimans and Henry Timms. Heimans is CEO of Purpose, which supports social movements around the world. Timms is executive director at New York’s 92nd Street Y, a 144-year-old institution; he also helped create Giving Tuesday, a classic new power movement.

Timms thought that after the consumerism of Black Friday and Cyber Monday, there should be a day to give back. The normal thing would have been to put the 92nd Street Y logo on the effort and organize charities and other organizations around a consortium. Instead, he and his team established the meme Giving Tuesday, created a web page and some tools for people who wanted to organize, and they let the crowd take over. There are now Giving Tuesday or Giving something organizations in over 100 countries. Local organizers talk directly to one another and reshape the movement as they wish. 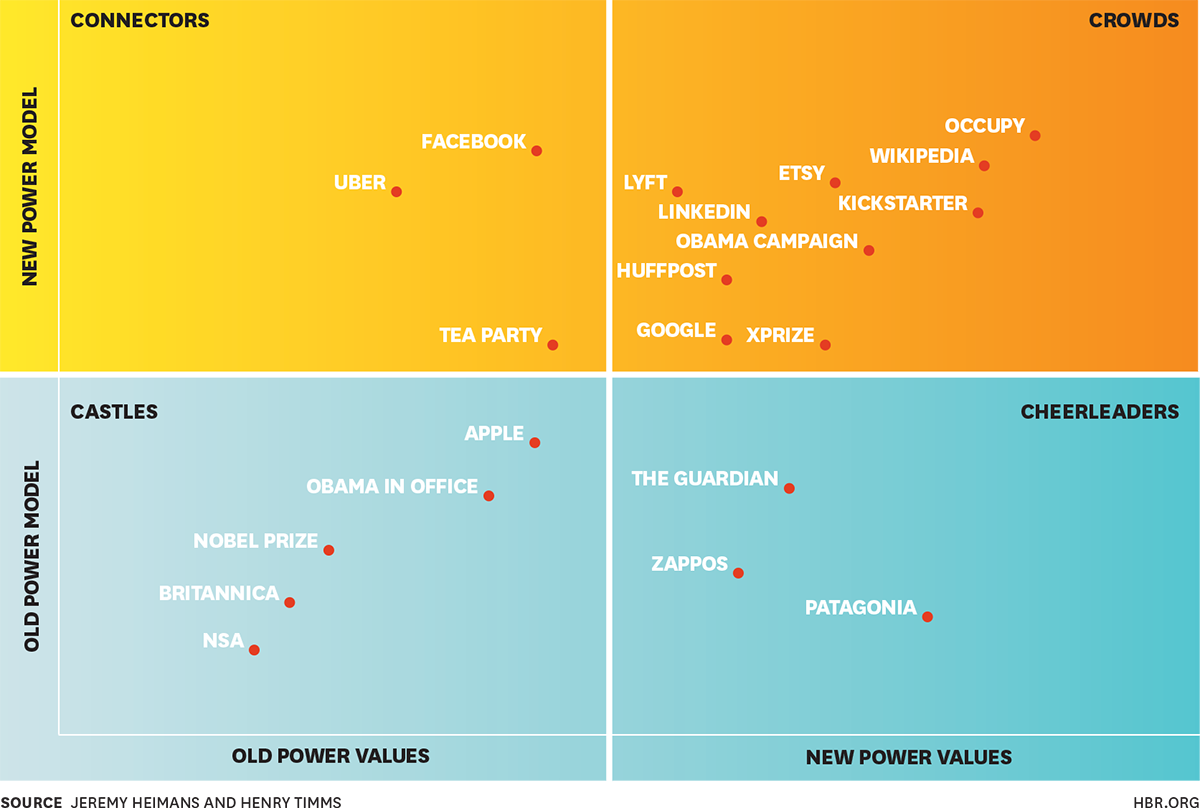