Flyknits to Gmails and Kindles … What can we learn from the innovation approaches of Nike, Google and Amazon? 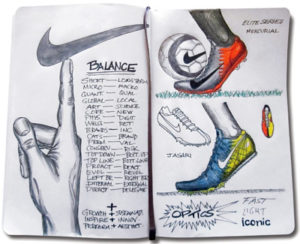 The process of innovation needs to be designed around a company’s culture, to fit their style of work and their workforce’s personalities. But to help you figure out how to start putting together the blueprints for your process of innovation, here are a few examples from the world’s leaders in innovation. How can you learn, adapt and apply the best parts of each for your own business?

One of the keys to Nike’s 50 years of success is that they have never sat back and rested on the power of their “swoosh.” They consistently power forward and strive for innovation. And they base their innovation on a flexible but strong four-part process.

Nike successfully implemented this process with their Flyknit shoe. In the first stage, the engineers came up with an idea that would completely disrupt Nike’s shoe production process. Their first prototype was a tube sock stitched to a rubber sole, since the designers and engineers knew that the product would completely evolve over time. Nike decided to partner with athletes like Paula Radcliffe to ensure that the shoe really was designed for sport performance. Finally, Nike pushed the Flyknit through to production and market success by ensuring that every employee that touched the shoe understood the importance of the product and that they were proud of their input.

While Nike has a process that allows for a lot of flexibility, Google has a more stringent process for its innovations. Google is also different from Nike in that instead of aiming to disrupt, their goal is to constantly improve—by a lot.

The first part of Google’s innovation process is explicitly encouraging their employees to spend part of their time on side projects in addition to performing their core job functions. The second element is narrowing down those ideas, prioritizing the ones that will make a product or service ten times better than it is. Then, similar to Nike, Google reaches out to the global community for help making an innovation the best it can be. Finally, the company takes a leap of faith and launches without the expectation of perfection. They want feedback from their consumers. Once they get it, they address user concerns and either scrap the product or improve it.

Gmail is one product that exemplifies this process of innovation. The idea was generated by a Google employee during their built-in innovation time. It was then accepted by Google as a major project when they saw that they could make the email experience ten times better by creating an intuitive interface and offering vastly more storage.

Next, Google recruited engineers and product managers just out of college to come work on the project. During the fourth step, the initial rollout of Gmail, the required infrastructure to make the service reliable was not even built yet. In the final step, Google made improvements, provided the necessary infrastructure, and succeeded in giving the world a revolutionary new way of communicating with each other.

Compared to Google and Nike, Amazon has a different, yet more traditional, process of innovation. Amazon’s major differentiating factor is that rather than allowing total creative freedom for employees, Amazon sets innovation objectives.

This setting of objectives is really the first step in Amazon’s innovation process. Individuals at the executive level look at where technology and consumer needs are heading and they formulate where their innovations should be directed. The second step in the process is sourcing ideas. Amazon sources ideas from anyone in the company, and then the executives at the top identify the ideas with the highest potential. Next, these top innovative ideas are pared down even further through a more stringent evaluation process. Finally, innovations are executed and the results are measured.

This process can be seen through the development of Amazon’s Kindle. First, Jeff Bezos set the objective of making Amazon’s best-selling products—books—more connected to technology. Second, he communicated the goal to his workforce and various ideas were generated. Third, they looked over those ideas to narrow the search down, and fourth, they analyzed the top ideas to pick the most innovative. Fifth, the e-reader was chosen and developed. Finally, the results were easily measured when the device sold out in less than six hours.

Nike, Google, and Amazon are ranked first, second, and fourth, respectively, as the most innovative companies in the world. They all refuse to sit back and wait for an innovative idea to just appear. They pursue innovation, encourage it among their workforce, and shepherd it through a process that allows an impactful product to be refined and developed.

So, what lessons can you take away from these highly innovative companies? Maybe your business innovates better with an established goal, like Amazon. Maybe, like Google, setting aside time specifically for innovation would be optimal. Or maybe total and unrestricted freedom and time to cause disruption, like Nike, is how your team works best. The only way to figure it out is through experimentation.