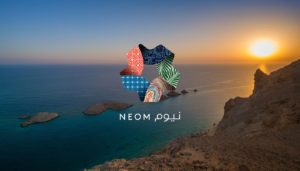 “The land of the future, where the greatest minds and best talents are empowered to embody pioneering ideas and exceed boundaries in a world inspired by imagination.”

Neom is the vision of Saudi Arabia’s 32 year old heir, Crown Prince Mohammed bin Salman, a $500 billion city on the Red Sea due to open for business by 2025, with limited operations expected as early as 2020.

For the last decade I have worked with businesses and governments across the Middle East, and they continually talk about how to move away from the dependence on oil which has ensured their vast wealth. Local leaders often look to the likes of Singapore, which has grown as a knowledge hub, or Hong Kong with financial services. However their ambitions have been turbo-charged in recent times by the “moonshot” thinking of the likes of Jack Ma and Elon Musk, but with the blank canvas and financial resources to go further and faster.

The social and economic changes, which the Saudi government embarked on in 2015, already include selling a stake in oil giant Aramco, and ending a longstanding ban on women driving cars. This week, Prince Mohammed announced the Noem city project, which plays alongside a more contemporary vision of society, business and lifestyle.

His promotional video for Neom features scenes inconceivable a few years ago. The virtual women of Neom go running in leotards in public spaces, work alongside men, and play in a musical ensemble. Artificial intelligence and the Internet of Things combine to offer a lifestyle not available anywhere else. “Your medical file will be connected with your home supply, with your car, linked to your family, linked to your other files,” he said. “And the system develops itself in how to provide you with better things.”

He envisions an app-driven city that is almost entirely automated and responsive to the needs to its residents. “The first robot in Neom will be Neom itself,” he said. Whilst his unveiling of Sophia, an intelligent humanoid robot created by Hanson Robotics, who was awarded citizenship of the country, caught the media headlines, the real story of Neom itself.

Saudi Arabia’s sovereign wealth fund and other investors are putting in “hundreds of billions,” Prince Mohammed said, backed by more than $500 billion of investments from the Saudi government, the Public Investment Fund, and local and international investors.

Agreements signed between Saudi Arabia and Egypt last year, including one to develop an industrial zone around the Sinai peninsula, were concluded with the new city in mind, he said. “The purpose of signing this free zone north of Sinai is to link it with Neom,” the prince said. “Neom will have a lot of ports. Some of them in Saudi Arabia and some of them in Egypt.”

Plans for the project include a bridge spanning the Red Sea, connecting the proposed new city to Egypt and the rest of Africa. 25,900 square kilometres of land have been allocated for development of the urban area, which will stretch into Jordan as well as Egypt.

Asked if the city would compete with other regional commercial hubs such as Dubai, Prince Mohammed said the outcome will be more win-win than zero-sum. He said Neom will “create new demand” that will help its neighbors too. “I don’t think Hong Kong harmed Singapore, or Singapore harmed Hong Kong.” 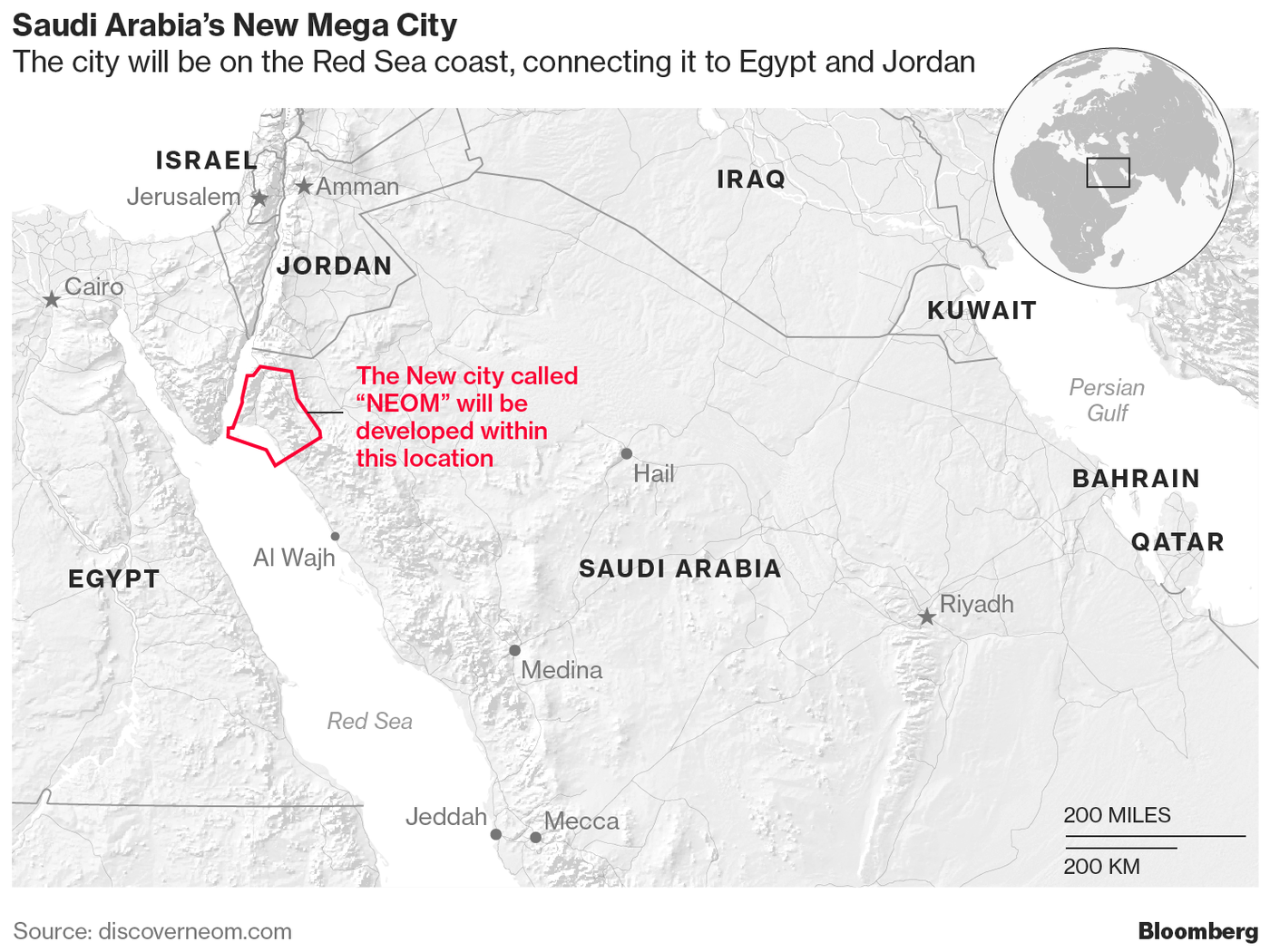 Here is a summary of the launch presentation:

NEOM is born from the ambition of Saudi Arabia’s Vision 2030 to see the country develop into a pioneering and thriving model of excellence in various and important areas of life. NEOM aims to thrive the transformation of the Kingdom into a leading global hub through the introduction of value chains of industry and technology.

“NEOM will focus on nine specialized investment sectors and living conditions that will drive the future of human civilization, energy and water, mobility, biotech, food, technological & digital sciences, advanced manufacturing, media, and entertainment with livability as its foundation. The focus on these sectors will stimulate economic growth and diversification by nurturing international innovation and manufacturing, to drive local industry, job creation, and GDP growth in the Kingdom. NEOM will attract private as well as public investments and partnerships. NEOM will be backed by more than $500 billion over the coming years by the Kingdom of Saudi Arabia, the Saudi Arabian Public Investment Fund, local as well as international investors”, said HRH Prince Mohammed bin Salman, Crown Prince and Chairman of the Public Investment Fund (PIF).

NEOM commands a unique location to bring together the best of Arabia, Asia, Africa, Europe and America. It resides in the Northwestern region of Saudi Arabia, and spans over 26,500 km . Overlooking the waterfront of the Red Sea to the South and the West, and the Gulf of Aqaba, NEOM enjoys an uninterrupted coastline stretching over 468 km, with a dramatic mountain backdrop rising to 2,500 m to the East. A constant breeze leads to mild temperatures. The wind and sun will allow NEOM to be powered solely by regenerative energy.

NEOM is situated on one of the world’s most prominent economic arteries, through which nearly a tenth of the world’s trade flows. Its strategic location will also facilitate the zone’s rapid emergence as a global hub that connects Asia, Europe and Africa, enabling 70% of the world’s population to reach it in under eight hours, which brings the potential to combine the best of major global regions in terms of knowledge, technology, research, teaching, learning, living and working.

The site will also become the main entrance to the King Salman Bridge, linking Asia and Africa, which will add to the zone’s economic significance. NEOM’s land mass will extend across the Egyptian and Jordanian borders, rendering NEOM the first private zone to span three countries.

Investments and financing will play a vital role in NEOM, set to be spearheaded by the Kingdom’s economy and supported by PIF – a major global fund with access to a worldwide network of investors and major companies — set to be brought onboard to drive the success of NEOM.

With the ambition of becoming one of the world’s future economic and scientific capitals, in addition to being the future commerce capital of Saudi Arabia, NEOM is set to attract new foreign direct investment that will contribute to PIF’s long-term growth strategy aimed at strengthening the Saudi Arabian economy.

NEOM is developed to be independent of the Kingdom’s existing governmental framework, excluding sovereignty. NEOM will adopt a regulatory framework that fosters technological as well as societal innovation and entrepreneurship in accordance with international best practices. Investors, businesses, and innovators will be consulted at every step of the development in how best to create the economic framework, design the urban plans, and attract top quality talent that will drive the growth of this zone and its resident population.

“NEOM will be constructed from the ground-up, on greenfield sites, allowing it a unique opportunity to be distinguished from all other places that have been developed and constructed over hundreds of years and we will use this opportunity to build a new way of life with excellent economic prospects. Future technologies form the cornerstone for NEOM’s development: Disruptive solutions for transportation from automated driving to passenger drones, new ways of growing and processing food, healthcare centered around the patient for their holistic well-being, wireless high speed internet as a free good called “digital air”, free world-class continuous online education, full scale e-governance putting city services at your fingertips, building codes that make net-zero carbon houses the standard, a city layout that encourages walking and bicycling and all solely powered by renewable energy just to name a few. All of this will allow for a new way of life to emerge that takes into account the ambitions and outlooks of humankind paired with best future technologies and outstanding economic prospects”, His Royal Highness Prince Mohammed bin Salman added.

NEOM will achieve its ambitious goals of becoming among the top secure areas in the world – if not the most– by adopting the future technologies in the fields of security and safety. This will raise the standards of public life activities and ensure the safety and protection of residents, visitors, and investors.

All services and processes in NEOM will be 100% fully automated, with the goal of becoming the most efficient destination in the world, and in turn be implemented on all activities such as legal, government, and investment procedures among others. Additionally, NEOM will be subject to the highest sustainability standards, and will provide all transactions, procedures, and claims through paperless and electronic means.

A new concept for the workforce will be implemented, based on attracting high-caliber human resources with unique competencies for full-time innovation, decision making and business leadership. Repetitive and arduous tasks will be fully automated and handled by robots, which may exceed the population, likely making the NEOM’s GDP per capita the highest in the world. All these elements will put NEOM at the world’s forefront in terms of efficiency which will make it the best destination in the world to live in.