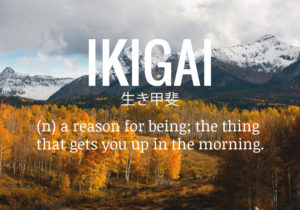 Ikigai (生き甲斐, pronounced “ick-ee-guy”) is a Japanese concept that means “a reason for being.”

Everyone, according to Japanese culture, has an ikigai. Finding it requires a deep and often lengthy search of self.

What if answering one question could improve people’s lives? Okinawa, a remote island to the south west of Japan, has an unusually large population of centenarians.

Okinawa is located in the famously called Blue Zone. Here people live way longer than the average Western life cycle, Okinawan have drive, purpose and a close-knit society. We endevaour to look in to what makes their lifestyle so admirable.

If it would be a simple solution, we would all live well over 100 years. Instead, the world is ridden with various diseases related to food, chemicals, pollution, and lifestyle. We are too busy to eat properly, and too caught up with work to do daily exercise. There isn’t enough time to cultivate friendships and relationships with family. Most modern cultures circle around achievements that are measurable in money, and recognition by society.

There is a place on Earth where people live longer than almost anywhere else on the Earth, a place called Okinawa.

The inhabitants of this island carry the secret to longevity and vitality. They live a long, happy and purposeful life. It is necessary to accentuate the word “purposeful”. Even at old age, people get out of bed in the morning with a purpose, a drive, and meaning. They all have clear and divided responsibilities that motivate them through their lives into old age.

Despite the tough and rural environment of the island,  and limited access to modern medicine and healthcare, Okinawans are healthier than our Western society. They don’t have cancer, heart disease, diabetes, they don’t struggle with mental issues such as dementia or depression. Also, Okinawan women live the longest on Earth.

One of their secrets is often said to be “ikigai”.

As this beautiful Nescafe ad puts it, ikigai means the reason for which you wake up in the morning:

So what’s your reason for getting up in the morning? What’s your motivation when you get to work each day? And your inspiration to do better, do more, and move forwards?

Ikigai comes from a country with one of the world’s oldest populations, the idea is becoming popular outside of Japan as a way to live longer and better.

While there is no direct English translation, ikigai is thought to combine the Japanese words ikiru, meaning “to live”, and kai, meaning “the realisation of what one hopes for”. Together these definitions create the concept of “a reason to live” or the idea of having a purpose in life. 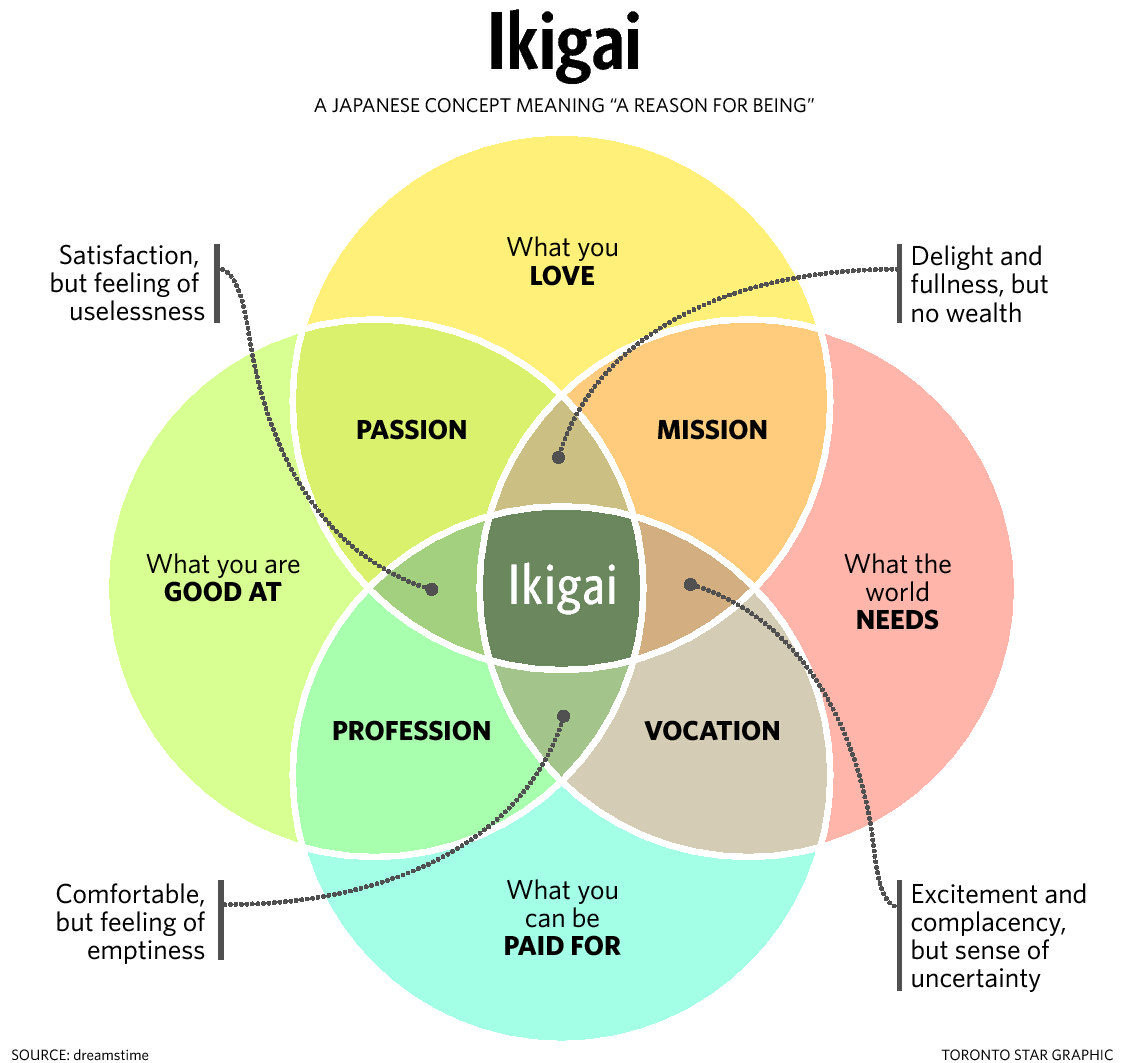 Ikigai also has historic links: gai originates from the word kai, which means shell. These were considered very valuable during the Heian period (794 to 1185), according to Akihiro Hasegawa, a clinical psychologist and associate professor at Toyo Eiwa University, adding a sense of “value in living”.

To find this reason or purpose, experts recommend starting with four questions:

Finding the answers and a balance between these four areas could be a route to ikigai for Westerners looking for a quick interpretation of this philosophy. But in Japan, ikigai is a slower process and often has nothing to do with work or income.

Gordon Matthews, professor of anthropology at the Chinese University of Hong Kong and author of What Makes Life Worth Living?: How Japanese and Americans Make Sense of Their Worlds, told the Telegraph that how people understand ikigai can, in fact, often be mapped to two other Japanese ideas – ittaikan and jiko jitsugen. Itaikkan refers to “a sense of oneness with, or commitment to, a group or role”, while jiko jitsugen relates more to self-realization.

Matthews says that ikigai will likely lead to a better life “because you will have something to live for”, but warns against viewing ikigai as a lifestyle choice: “Ikigai is not something grand or extraordinary. It’s something pretty matter-of-fact.”

According to Dan Buettner, an expert on Blue Zones, the areas of the world where people live longest, the concept of ikigai pervades the life of these islanders. Combined with a particular diet and support network of friends or “moai”, ikigai is helping people live longer on Okinawa as it gives them purpose, he says, who provides a karate master, fisherman and great-great-great-grandmother, all of whom are more than 100 years old, as examples.

But knowing what your ikigai is not enough – all of these people put their purpose into action, says Buettner. Researchers stress that ikigai can change with age. For anyone whose work is their reason for living, this will come as a relief as they approach retirement and begin the search for a new ikigai.

In Okinawa, people foster close and meaningful relationships with each other. Friends and family support each other through life and people are not left alone and unattended. The old support the young, and the young support the old, all living in a friendly and positive symbiosis. These social networks help to reduce stress while also provide a secure support in daily life, where people know they have others to count on when they are in any kind of need.

Most Okinawans consume a vegetable and tofu-based, lean, clean, and light diet. They eat nutritious, and low-calorie meals combined with various soy dishes. This diet helps them to stay healthy, and fit. Avoiding heavy meats, as well as fats, sugar and altogether processed food supports a fight against cancer, heart diseases, and also obesity. Metabolism boosting green tea is heavily included in the daily diet. They also consume lots of ginger, mugwort, various herbs, and chilies.

Besides eating light and healthy, Okinawan believe in the power of exercise. They build their daily rituals through walking, dancing, and gardening. They spend a substantial amount of time in the outside breathing in fresh air and enjoying the positive benefits of sunshine. With regular access to sunshine and exercise, they are healthier, with stronger bones, higher vitamin levels and in a brighter mood.

Life in Okinawa isn’t necessarily a walk in the park. Although I managed to paint a very bright and easy looking picture of it. It has a strangled, and dark past, that Okinawan manage to leave in the past where it belongs. They focus instead on the simple pleasures of the now.

What we take away from this culture, from one of the very few places located in the Blue Zone, is that life quality should not be measured but fortune and fame. Rather fostering quality of relationships, finding peace of mind in simple everyday acts, and living an activemeaningful life.