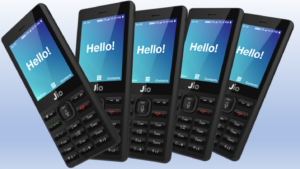 Last week, Indian billionaire and founder of Reliance Industries, Mukesh Ambani launched the Jio Phone. An (almost) free smartphone for the hundreds of millions of aspirational Indians who he serves, and a radical rethinking of the telecoms business model.

The FirstPost newspaper described it like this: “With Reliance Jio Phone, Mukesh Ambani is doing for India’s poor what Steve Jobs did for America’s rich”

It continued, saying that the pricing of a close-to-free device, free-voice and highly affordable data plan in the world’s fastest growing major economy and the second most populous nation puts Reliance Industries in a historic league going beyond profit and shareholder value.

Somewhere up there, the late founder of Reliance, Dhirubhai Ambani, must be smiling. The story goes that one key advice that he gave to Mukesh before his passing in 2002 was to keep at least 20 percent of India’s population engaged for RIL to sustain the high growth it was delivering to its shareholders. And the bottom of the telecom pyramid is making it happen for Mukesh.

Writing in “A Million Mutinies Now,” Nobel laureate V S Naipaul discussed how the late Dhirubhai brought clothing to India’s millions by betting on polyester that “lasts and lasts and lasts.”

In the generational transition of RIL, the company is now shifting from kapda (clothing) to bandwidth (data), having plumbed in the middle of the Bay of Bengal seas to dig for oil that approximates for Bijli (electricity) as an energy source. If you are still measuring RIL’s petroleum refining margins to see if it is a winner, you are missing the point on the future.

If you want RIL’s dramatised unveiling of the Jio Phone to shareholders and the country in one sentence it is this: What Steve Jobs did for America’s rich, Mukesh Ambani is doing for India’s poor.

Nokia ushered in the smartphone. BlackBerry made it corporate. Jobs-led Apple changed the ecosystem with a platform that made third-party developers drive the device through numerous services. South Korea’s Samsung and China’s Xiaomi and Huwaei made it all affordable to Asians. Mukesh Ambani is now bundling, in his words, “connectivity, data affordability and device affordability” together with price plans that woo the bottom of the pyramid in terms they can relate to easily.

Commentators will no doubt calculate interest rates and hidden pricing in the 3-year, Rs 1,500 refundable deposit that the Jio Phone entails. But the real deal is the back-end where RIL is quietly becoming a media company to buttress its hold on e-commerce through Reliance Retail and how it will make bankers, investors and overseas bond markets respond to the plan.

Now, with 100 million paying customers who will pay anything between Rs 153 and Rs 309 a month in most cases, if you take a back-of-the-envelope figure of Rs 250 for 100 million customers, RIL will get revenues of Rs 2,500 crore a month, not counting revenues from synergistic aligned businesses such as content and retail. That kind of cash flow would make it easy for RIL to raise loans in international markets at cheap rates. Watch this space.

The sweet spot for Mukesh Ambani is that unlike those who rushed in to build 2G networks, he has not splurged on spectrum and is betting on a complex bundling of services to build profits. He has also gained from a whole range of apps and services that have hit the markets over the past decades for him to simply leapfrog into the bundling game.

No wonder, the JioPhone is off to a blazing start in the country. The JioPhone that went on pre-order on August 24 was able to amass as many as 60 lakh pre-orders in one day before the whole process was halted because well, too many people apparently wanted to join the bandwagon, at the same time. RIL also managed to register an additional 10 million expressions of interest for the JioPhone after the bookings closed.

Sources have confirmed to India Today Tech that Reliance Retail Limited (RRL) — the entity responsible for selling RIL’s Lyf-branded phones like the JioPhone — booked more than 60 lakh JioPhones within a day of opening of booking on August 24.The bookings were stopped on August 26 both online and offline as they were much more than what the company expected. This may also be the reason the delivery date of the JioPhone has been pushed further.

There were reports that RIL may start shipping the JioPhones sometime in early September, but, the same was then pushed to start from September 21 only to be pushed furthermore. As of now, RIL has reportedly started shipping the phones, which means some have got it, others will get it soon enough. The demand for the JioPhone — in the initial run — has been so large that the company has decided to meet them first before starting the second round of pre-orders.

The JioPhone is a feature phone, but, it is smarter than other feature phones in the market right now. For one, it is 4G LTE and VoLTE-ready which means that it has the capability to become a user’s full-fledged internet device, much like a smartphone. Jio, being a 4G-only network, requires such a phone, after all.

Qualcomm and Spreadtrum have independently confirmed that RIL’s 4G capable feature phone will have two versions. While one batch will be powered by a Snapdragon 205 SoC, a processor Qualcomm has made specifically for ultra-affordable 4G VoLTE phones, the other batch will come with an unspecified Spreadtrum-based processor on the inside. The one that I have been using is based on a Qualcomm 205 SoC clubbed with 512MB of RAM and 4GB of internal storage which is further expandable by up to 128GB via a micro-SD card slot. The software inside is a custom fork of Firefox OS — called KaiOS — with features like voice search/virtual assistant built-in.

The JioPhone has an all-plastic body with a T9 keypad on-board and support for as many as 22 Indian languages.The home button in the center besides helping in navigation, also serves as a dedicated shortcut for firing up the voice assistant. The JioPhone comes with a 2.4-inch QVGA TFT colour screen and NFC support for secure mobile payments (something that will be pushed out later via a firmware update).

The JioPhone, moreover, comes with a 2-megapixel rear facing camera and a VGA front camera. It is further backed by a 2,000mAh battery and uses a micro-USB port for charging and data-syncing purposes.

What’s most important for the majority of potential buyers out there is the fact that they will be able to browse the Internet and make video calls using the JioPhone.

— The biggest drawback, in the case of the JioPhone in this increasingly connected world, is that the feature phone doesn’t support apps like WhatsApp and Facebook, for now. This could be a deal breaker for many. Those looking to use Facebook can however use the phone’s in-built browser to access their social media account. The in-built browser supports a number of search engines: Yahoo, Google, Bing and DuckDuckGo that can be manually enabled from settings. The in-built browser is also capable of giving search suggestions. Moreover, the JioPhone also supports do not track feature so websites and apps won’t track users’ behaviour while using them.

— The JioPhone comes with an in-built virtual assistant that can be used for voice search and fire up relevant apps, including calling and texting people. It’s a bit slow, but, the fact that a feature phone has this functionality is in itself quite a big deal, to say the least.

— The JioPhone’s call-book not only supports saving contacts from SIM, but also from Gmail and Outlook, which is particularly handy for tech-savy individuals who like to save them on the cloud.

— The JioPhone doesn’t have a dedicated app store for now. But it comes pre-bundled with Jio’s apps: JioCinema, JioMessaging, JioTV, JioMusic, JioMoney, JioExpress and JioVideocall. There’s also an app called JioGames that lets you play a couple of odd games or two on the go.

— Not all, but most of the Jio apps that the JioPhone ships with will be able to run on Wi-Fi which means if you have a steady connection at home or elsewhere, you can use that to view its host of services rather than exhausting your data. The JioPhone although it supports Wi-Fi can’t function as a Wi-Fi hotspot.

Is it free or is it not?

Reliance Jio plans to cover 99 per cent of India’s population in the coming years, and it plans on doing that by opening as many as 10,000 offices and 10 lakh outlets for physical distribution of its services, including devices like the JioPhone. “It took 25 years for competitors to build their 2G network, but, Jio will achieve its targeted 4G reach in just 3 years,” Mukesh Ambani had said while announcing the JioPhone.

The company initially set out to grab customer base by offering cheap Lyf-branded smartphones, offering data and voice calling for free. Since then, it has gone on to (also) charge its customers, and a “majority of free subscribers have migrated to paid subscription with 100 million paying customers now,” according to the company.

The company has, for the time being, launched a special Rs 153 plan to go along with the JioPhone that will offer free voice and SMS, unlimited data — with an FUP of 512MB per day — and subscription for Jio apps like Jio Music, Jio Cinema, Jio TV and others. The biggest deal about the JioPhone is the fact that it supports most Jio apps just like a smartphone, and it is able to run these apps at 4G speeds.

Also, the company has launched a new accessory — JioPhone TV cable — to mirror a user’s Jio phone content on a TV at Rs 309 per month.

The JioPhone may technically or effectively be available for free, but there’s a catch, although whether that is good or bad will be completely subjective. Buyers will have to shell out a one time refundable security deposit of Rs 1,500 which will be refundable only after a period of 36 months. RIL specifically notes that, in order to be eligible for a cash-back of Rs 1,500, users will have to return the phone to the telecom operator after three years. The initial batch of JioPhones are being imported from China with RIL planning to make them in India towards the end of the year should there be great demand.

In order to get the JioPhone at an effective price of Rs 0 or free, here’s the total amount that you’ll have to shell out:

Which means, essentially you’ll be paying for just the Jio 4G tariff plan should you be looking for the cashback. But then you’ll also have to return the JioPhone to RIL after three years. If not, the total charge incurred for the same period will be Rs 7,008.