Branding without a brand … challenging the old world of “lazy, inefficient, expensive” brands 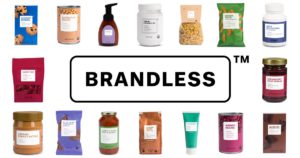 Everybody talks about branding being more than a logo. So how do you harness the power of branding, whilst being unbranded?

A new startup launched this week called Brandless with a goal to sell a mix of household goods and food online with the goal of changing consumption habits and making quality food affordable.

As the name suggests, Brandless is trying to emphasize the products it sells rather than the brand itself. But creating the packaging for the 115 items the company sells as well as its graphic identity presented a unique challenge–how do you brand a company that’s called Brandless?

“I think we really wanted to be conscious from the start about not being insincere. Of course Brandless is a brand,” says Emily Heyward, a partner at New York-based branding agency Red Antler, which designed Brandless’s packaging and identity in an interview with Fast Company magazine. “We didn’t want that to ring false because that’s against the company’s philosophy.”

The company sells a limited number of products that range from food to kitchen supplies to beauty products, all for $3 or less. Brandless’s CEO and cofounder Tina Sharkey says this is possible because most food has what she calls a BrandTax, a markup in price that customers pay for the privilege of consuming a particular brand–which means that customers end up paying up to 40% more than what food actually costs.

But Brandless’s aim isn’t just to make quality food more affordable. It also wants to streamline and simplify the overwhelming number of tiny decisions people make when choosing what brand of food to buy by only selling one kind of everything, which includes pantry staples like rice and beans as well as cleaning supplies and even knives and kitchen utensils. Each Brandless product features a white box with a list of attributes about the food–organic, non-GMO, you name it–that are meant to be the things that customers really want to know when they’re purchasing food. That means the packaging for green tea and for toothpaste is slightly different, but follows the same basic formula.

Sharkey is very clear that Brandless isn’t anti-brand per se–instead, the company’s name is meant to be a clear rejection of the over-designed branded products that fill the aisles of grocery stores, each shouting that it’s healthier and more delicious than any of its many competitors. “We’re trying to reimagine what it means to be a brand in today’s world, a brand rooted in authenticity, transparency, and trust,” Sharkey says. “If we do this right we’re actually building a community of people who want to change the way we live, where we can focus on living more and branding less.”

To sidestep what Sharkey calls the “false narratives” of most food packaging, Brandless wanted simple design that got right to the point.

Heyward and her team’s solution: a white box. It sits clearly in the middle of each product’s label, and features the product’s name followed by a checklist of two to five descriptors like organic, non-GMO, no added sugar, no artificial preservatives, and gluten free. These are chosen by a group of people within the company that Sharkey calls the “white box council,” based on data about successful products and household penetration, research, and focus groups. The last checkmark is always BrandlessTM. But that’s not the only part of the packaging that’s trademarked–on each package, there’s a tiny “TM” outside the white box itself.

This is all in service of Brandless’s conviction that simple, straightforward presentation of what exactly customers care about most should be front and center on food packaging. “We’ve tried to strip everything back to create almost like a UI and a UX for a physical product company, with an interface driven by simplicity and transparency and just-what-matters philosophy,” Sharkey says.That presented a challenge to Red Antler’s designers, who had little outside of a white box and a checklist to make food look appealing (and differentiate toilet bowl cleaner from taco seasoning).

“If you think about your favorite hand lotion brand, it’s typically not the same as your favorite tomato sauce brand,” Heyward says. “So how do you build a system that sings each product’s benefits, and makes you covet each product for itself? We wanted you to want that tomato sauce, we wanted you to want that dishwashing liquid. It had to feel right for that individual category.”

While the trademarked white box is the vehicle for Brandless’s mission, it also allows for something else: a distinct background to differentiate the dish soap from the salad dressing. For instance, Brandless’s mac and cheese packaging features the white box against a photograph of cheesy pasta spilling out onto a yellow background, while the ketchup’s white box contrasts against a simple red background that nearly matches the color of the condiment. Most of Brandless’s snacks feature photography of the food itself so you know what you’re buying. Despite the mission, you still need to convince people they want to eat something. “There’s a visceral appetite appeal that needs to be part of food packaging,” Heyward says.Because Brandless sells such a broad array of food products, Heyward and her team also were conscious of choosing colors and photography that would look good together in someone’s pantry. The color scheme is generally bright, with special attention paid to similar foods. Now, your kidney, black, and garbanzo beans will all complement each other on the shelf.

So far, Brandless’s products are only available online and you’ll never find them at your local market–Sharkey says they’ll never show up on a retailer’s shelf, leaving open the possibility for Brandless brick-and-mortar stores. Though if you do buy Brandless’s brand and order some Spicy Jalapeño & Cheddar Flavored Quinoa Puffs, be prepared: If someone asks you where you got them, you’ll have to say with a totally straight face, it’s Brandless.