A storyboard is a sequence of illustrations which aim is to visualise the critical moments of a whole story. That isn’t a new tool in animation. Indeed storyboarding has been popularized by Walt Disney Studios during the 1930s.

Storyboarding is critical in animation as it enables to develop the broader story. Indeed, the developers of content would use storyboarding as an inexpensive way to build content to see if it worked before doing the full production.

Thus, storyboarding, as used in animation, has a few key elements that made it so useful:

Storyboarding, which has become a best practice and process in the movie industry, is now becoming also an essential process in business, let me show you why.

Walt Disney had mastered the storyboarding technique and made it a process within Disney before the production of big movies that made the company successful over time.  The storyboard allowed Disney to share and make them understand the vision of the project.  It is famously noted that Steve Jobs brought the love for aesthetics within Apple‘s UX from a calligraphy class he had at the university.  Thus, when you do find valuable thinking tools borrowed from other disciplines, it’s interesting to notice how they create value in the business world. Storyboarding in business can help in many other cases like:

Consider how Airbnb has been using storyboarding to uncover hidden patterns for its customers that enabled the further platform scale.

Back in 2011, Brian Chesky, co-founder of Airbnb, over the Christmas vacation had picked up a biography of Walt Disney. In there he found a technique that Walt Disney used. As the story goes, during a passage of Walt Disney biography, Chesky noticed how, during the production of the movies “Snow White and the Seven Dwarfs” in the 1930s, Disney used storyboards, a technique invented by a Disney’s animator a few years earlier. Chesky felt that when Disney had used this technique, he was in a similar situation, that Airbnb was facing at the time.
Thus, Chesky with the other co-founders had an animator from Pixar design the storyboard for the three key processes:
Those storyboards brought in the Airbnb headquarter had the purpose of aligning everyone in the organization around the critical elements of the customers’ experiences.
Here’s an example of storyboarding the guest journey, from smashingmagazine.com 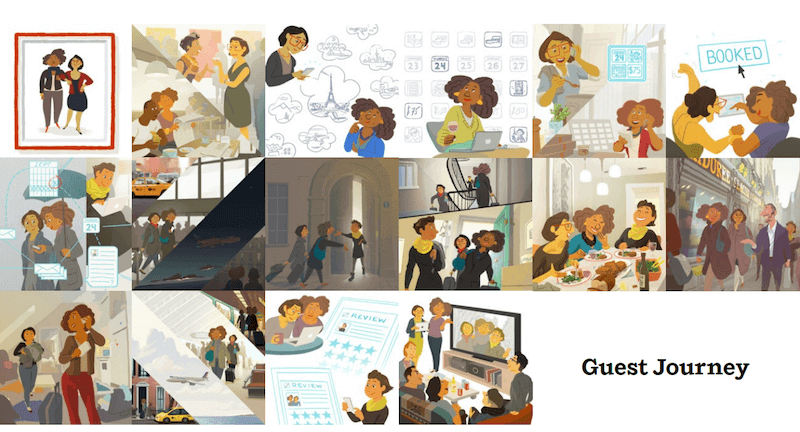 Empathise with your customers

As Nathan Blecharczyk, co-founder and CSO at Airbnb pointed out “Creating a great customer experience is the highest priority at Airbnb and something that we’ve made a big part of our culture.”

Storyboarding then helped Airbnb executives and employees to understand its customers deeply. Empathy and being able to feel the emotions and moods of customers throughout travel experienced enabled Airbnb to map it at best.

One thing that’s really helped is a storyboard we created that depicts the different steps someone goes through from the time she first hears about Airbnb to the time she leaves post-visit feedback. We have 15 pictures that cover the guest journey and 15 more that show the journey for the host.

Nathan Blecharczyk also pointed out how this storyboarding process needs to be done from end-to-end. Since the customer first hears about your product and service, up to the time she/he has consumed it.

Understand where you’re missing out

What the storyboard made clear is that we were missing a big part of the picture—the offline experience—that’s an even more meaningful part of using Airbnb than booking a property.

Thus, this process enables the company to uncover steps you were missing out. Each of those steps you were not covering or providing value for will become an essential ingredient for great customer experience.

However, it is important not to get bogged down in too many details.

Select only the meaningful moments

We started brainstorming what our storyboard would look like. We started with a list of many, many moments, grouped like ones together and refined them down into a concise set. If you have too many moments on your storyboard, it’s worthless. Fifteen seemed comprehensive yet manageable.

As pointed out by Nathan Blecharczyk on the Sequoia blog, it is crucial to map at first only the most significant moments. That makes the process manageable and actionable. For instance, Airbnb had mapped fifteen key moments in its storyboards.

Build a roadmap around those key moments

We then had a roadmap for figuring out what a customer expects in each of those situations, what we were doing to meet those expectations and where we had an opportunity to create a “wow” moment.

Once those key moments get uncovered, it’s time to offer a great customer experience by providing value to your customers in those faces. Airbnb likes to define those moments when the value is provided at best as a “wow” moment.

Thus, it has to be turned into a product roadmap.

Uncover the gaps and fill them up with a “wow” experience

We noticed a lot of gaps. It became our number one priority to fix those areas where we weren’t doing what the customer expected of us.

What’s a valuable, “wow” moment? Imagine in Airbnb‘s case the case of a guest arriving at a host’s house and without even knocking the door finding the guest with a bottle of champagne to celebrate the arrival of the guest (this is an exaggerated example as some people might not like this welcome).

But the point is the storyboard enables you to develop a deeper bond with a customer, to improve the experience at each potential step.

One example of one of the projects that Airbnb has implemented as a consequence of using storyboards is the “neighborhoods guides” section available on the platform. 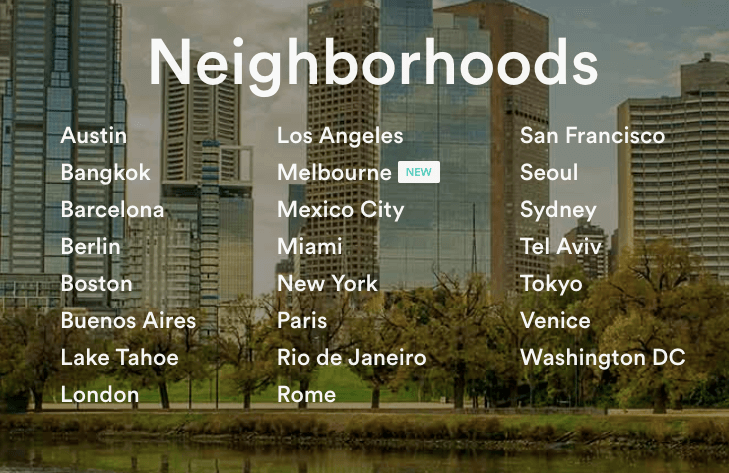 With storyboards, Airbnb understood all the questions travellers had before, during and after traveling. Therefore, Airbnb, came up with the neighborhoods guides:

So that for each city people could find answers to questions related to the things to do in the city.

And also look at all the possible things to do in each neighborhood.

This helped Airbnb guests to find all the travel-related answers they might have before reserving the trip.

Those guides are so granular to unlock key information for each neighborhood, almost like you had a local, giving you all the suggestions  you needed to have a great trip: