We live in an unprecedented time – more change in the next 10 years than the last 250 years. Scary but incredible. Anyone in business still trying to hang onto the old models which made them successful is a fool.

We need innovation just to stand still. Looking forwards is not easy. Unlimited possibilities, complex and uncertain, infinite choices. Is it possible to forecast the future in such a volatile environment? Does strategy still matter? How do you make the right choices? What should you do today?

Step back and think about yourself. Two big questions today – at what age do I want to retire, and how long will I live for? A few decades ago, there was nothing daunting about those questions. You’d retire when you were 60-65, and look forward to another 10-20 years of gentle cruising.

Not anymore … Average life expectancy heading for 100, declared a recent Daily Telegraph headline, whilst  Scientific American added that “aging is reversible” based on lab experiments on mice. Alibaba founder, Jack Ma wondered if, a couple of centuries from now, we might need to legislate the caps on lifespan. Yet we are embarking on a period of rapid innovation, with likely breakthroughs that we can’t even imagine today – be it colonization of space or self-aware artificial intelligence.

On the other hand, climate scientists warn of the devastating effect global warming might have on human civilization if we are unable or unwilling to reduce greenhouse emissions in time. Even if some of our western global leaders don’t want to believe it yet. Potentially catastrophic risks abound and could, quite possibly, thwart the positive development trajectory.

So how do you plan for anything in this new age of the fourth industrial revolution?

The McKinsey Global Institute estimated that “half of today’s work activities could be automated by 2055”, and, then, the Economist magazine explored the fast emerging world of quantum computers quoting Google as saying that “such machines are only five years from commercial exploitability.” Will quantum computers turn everything upside down yet again? “Such computers will be able to chomp their way through calculations that would take today’s best supercomputers millennia,” the Economist explained. What effect will this have on jobs or any other facets of human experience is difficult, if not impossible, to forecast.

Every business, market and stock market, is being turned upside down by these new dynamics. Start-ups and large corporates have just as much chance as winning in this future – supertankers with scale versus speedboats with agility. The churn in the Fortune 500 index speaks for itself, and while we can’t easily forecast which tech startups will succeed and which will fail, what we can say with confidence is that the index turnover is going to accelerate.

Much of the uncertainty, about, basically, everything, originates in the phenomenon described by Mike Lee, who argues that “The next double-century (2000-2200) promises no fewer than 150 breakthrough innovations on par with the steam engine, antibiotics and the airplane.” Tech-fuelled growth has doubled every 200 years since 1400. And whilst that might seem big, what would put this in perspective is the fact that we’ve achieved about half as much during the last 5 millennia. 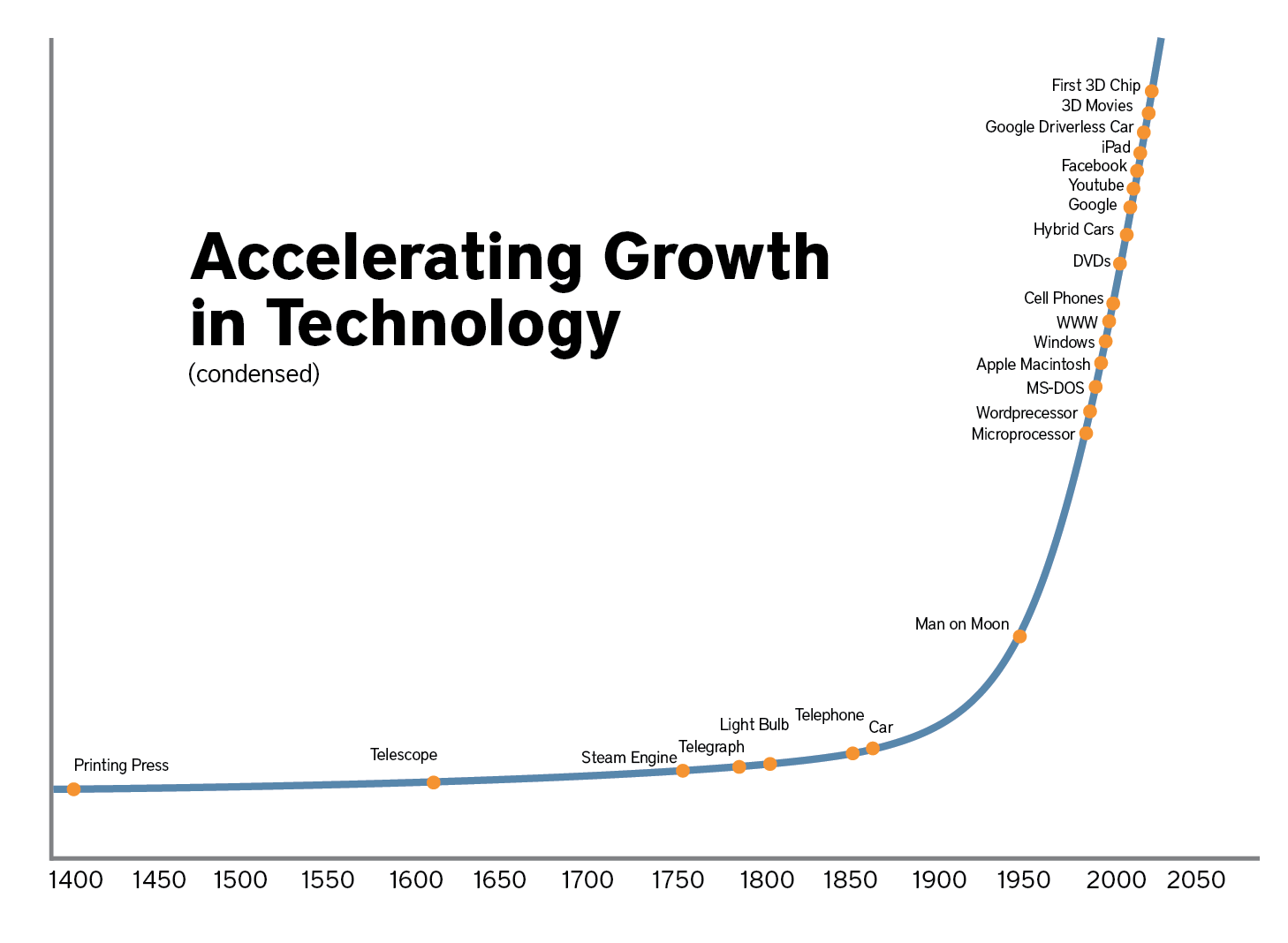 The creation of the telegraph, the internet, and the smartphone reshaped the world for every generation that witnessed them. If inventions of such magnitude emerge twice per decade instead of once in a century, forecasting will be futile, you could say.

This isn’t about knowing which big breakthroughs are about to disrupt our economic models or change the way we live, it’s the interplay and layering of these inventions. As policy-makers, business leaders, and engineers brainstorm applications for, say, blockchain technology, reaching comprehensive conclusions will be just as difficult as it would have been to predict that the smartphone might soon be able to outdo a physician in diagnosing an illness.

You cannot extrapolate the future based on the past, so what do you do?

Many businesses are seeking new mindsets – an entrepreneurial culture, corporate venturing and elevating the innovation imperative to the level of existential priority. Strategy matters more (the need to have some direction, when anything is possible, and framework to make choices), but also needs to be done differently (less incremental, less numeric, less operational). Strategic foresight and scenario planning are useful methodologies for business to adapt and adopt to the ever-changing competitive environment.

Of course wild speculation about accelerating technological process is hardly a novel trend. The news of self-driven carriages must have terrified horse owners; and those pundits who witnessed automation of factory jobs predicted sustained mass-scale unemployment. Every time we attempt to predict the future with the contextual awareness of today, we struggle with the failure of imagination or, perhaps, we discount the notion that unknown unknowns are unknowable by definition.

When cars replaced horses as the primary means for transportation, the world didn’t come to an end. The preceding industrial revolutions pushed a number of vocations into oblivion, but plenty of new jobs have been created in their stead.

If the post-forecasting era is indeed upon us, what does it mean for the mere mortals (a term that we might have to revisit by 2200) and how should we cope? We must begin by accepting uncertainty as a given; stay openminded about technological progress; and, bitcoin had just surpassed the value of gold, Dubai is planning to introduce autonomous flying taxi service, and Airbus has unveiled a drone car concept.

But it also means not giving up on strategy.

Leaders need to be the sense makers, the future guides, as well as the decision makers.

Time to rethink strategy. Be the sense makers, the future guide – to create and shape the future to your advantage.