Exponential business growth … forget the technology, instead think about it in terms of customers and communication, communities and networks

Exponential growth is the rate of change measured over a given number of equal time intervals. Basically, when a business grows by 100% (or doubles) over multiple time intervals, each increase of 100% is added to the starting value, resulting in compounding and an environment of exponential growth.

The formula for exponential growth begins by taking the starting value of whatever metric you are measuring—for example, revenue or number of users. Then you evaluate the percent increase over a given duration of time.

The final component in the formula for exponential growth is the exponent itself. The exponent, in this case, is the number of equal time intervals being measured. Here is the formula for you mathematically inclined folks out there:

r = rate of increase (or decrease if measuring exponential decay)

t = time in equal intervals expressed as an integer 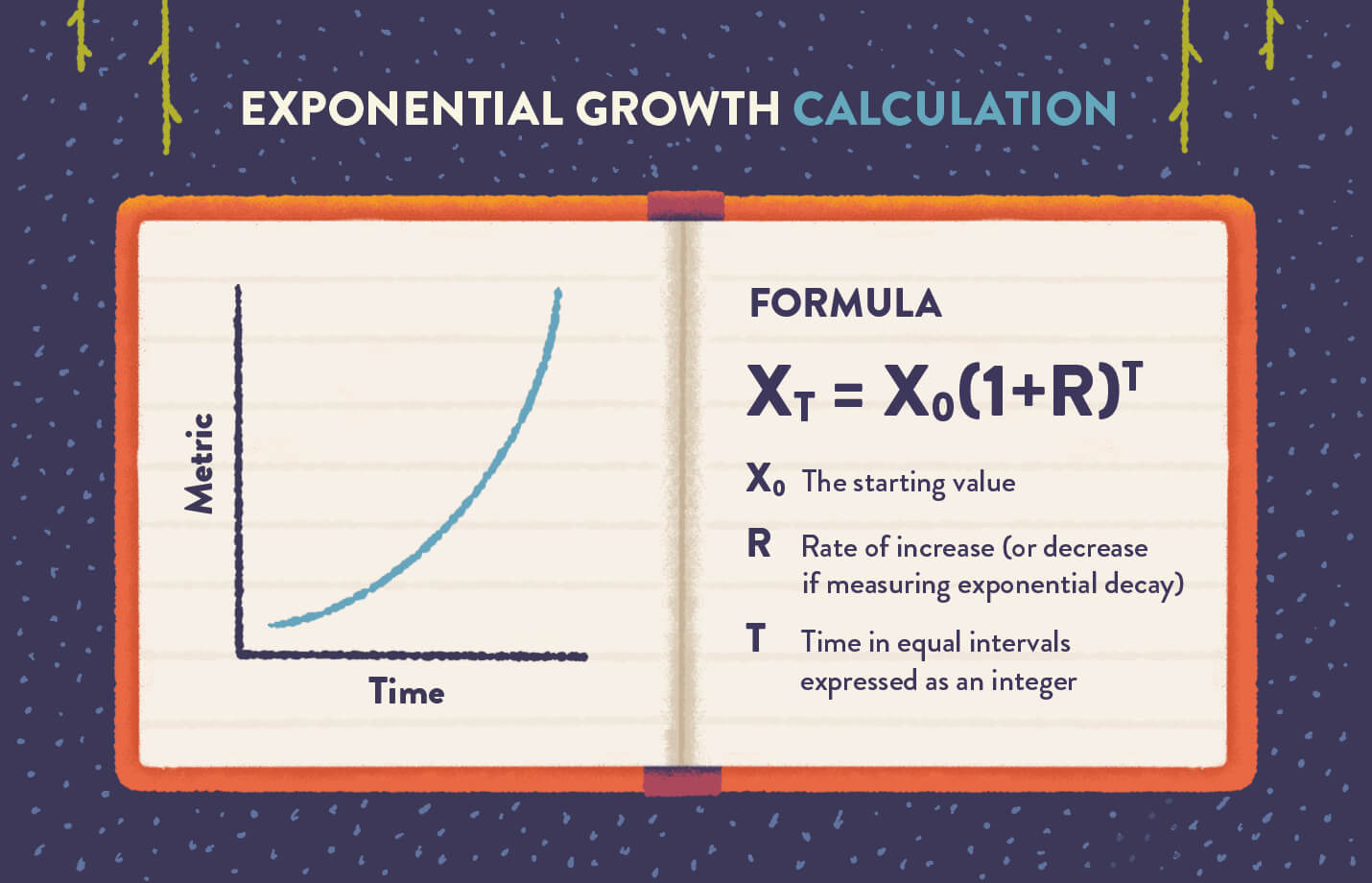 Let’s take your app as an example.

In the first year, your app acquired 500 users. In year two, the number of customers increased by 10%, adding 50 new users for a total of 550 users at year’s end. If this growth continues, how many users do you think you will have after five years?

But how different would this number be if you achieved exponential growth of 100% year over year for that same five year period?

As you can see, achieving exponential growth makes a huge difference. In this case, that difference would be 15,195 users—to be annoyingly precise.

One of the biggest facilitators of exponential growth in marketing is the idea of viral coefficients. Sometimes used interchangeably with going “viral,” the viral coefficient takes advantage of word-of-mouth marketing.

If every single customer invites 10 people within their network to use a product or company, exponential growth is all but inevitable.

Then the network effect takes over. This is where the product becomes more useful as more people use it. Instagram, for example, would not be very interesting if only a handful of people posted pictures.

As increasingly more people join and post their pictures, they bring with them their friends, families, and fans.

Examples of Exponential Growth in Business

Probably the best example of exponential growth is Facebook’s monthly active users (MAU). At the end of 2004, Facebook had 1 million MAUs and at the end of 2018 that number had risen to 2.32 billion.1

Okay, you might not have heard, used, or told anyone about this next example but if you want to talk about exponential growth, you can’t avoid China.

DiDi is China’s ride-hailing Uber alternative. Although it was started in 2012 and is likely a casualty of China’s complete disregard for Silicon Valley’s intellectual property, DiDi has grown to eclipse Uber’s usage statistics.

Let’s start with some Uber usage stats. Founded in 2009, Uber has 75 million users, employs 3 million drivers, and completes more than 15 million rides per day. Not bad for a 10-year-old company.

DiDi, on the other hand, has 550 million users, employs 21 million drivers, and completes 30 million rides per day. Impressive when you consider Uber had almost a 3-year head start.3 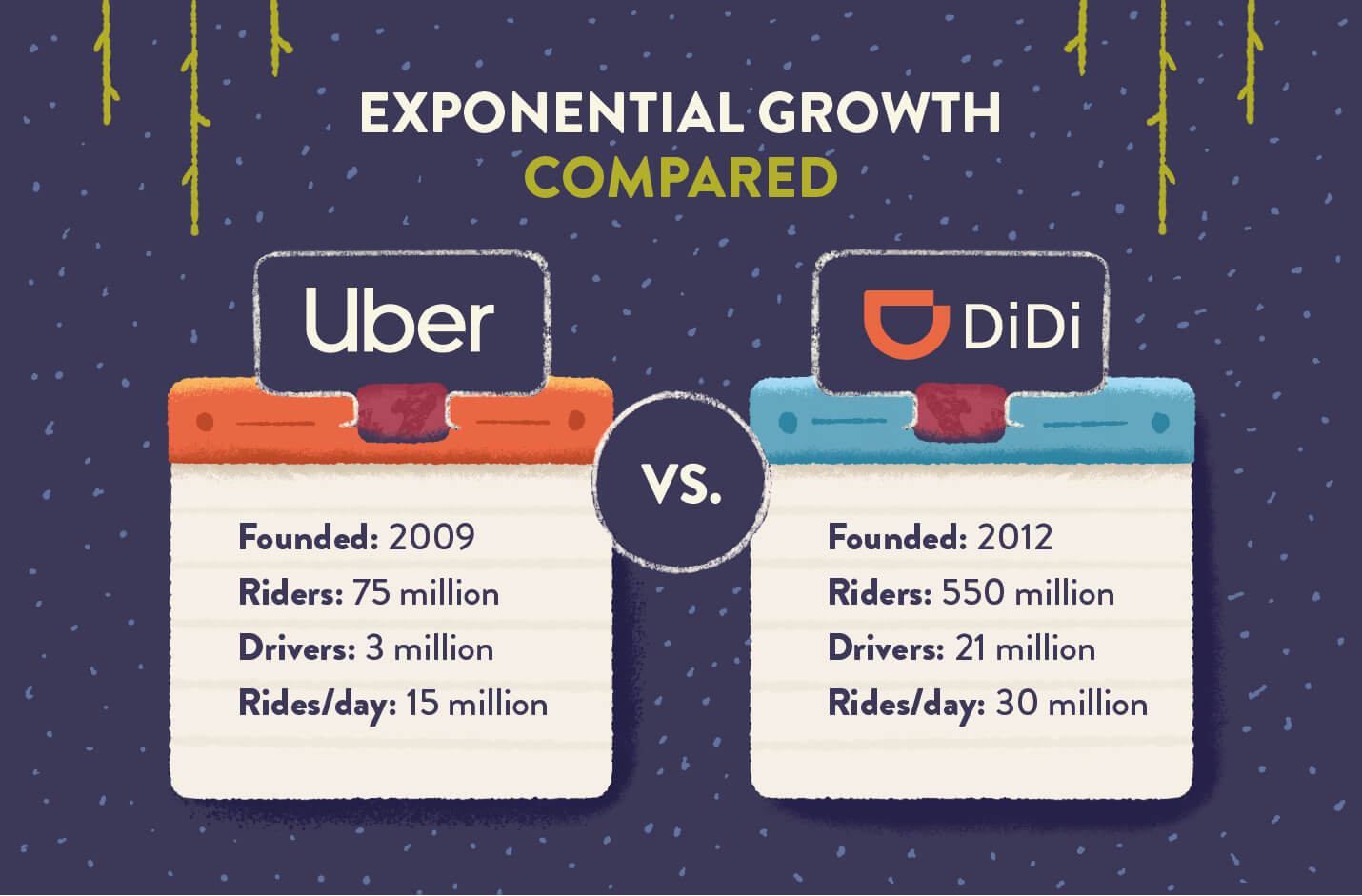