Nike’s Breaking2 is brand innovation at its best … inspiring people to do more, moving the world forwards 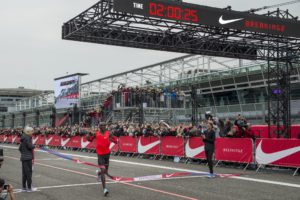 Today I woke at 04.45 to watch a Twitter livestream from Monza’s F1 track in Italy. Three of the world’s best long-distance runners lined up in the dark to challenge one of sport’s biggest barriers – to break two hours for the marathon.

The Breaking2 project was the brainchild of Nike, and in particular Sandy Bodecker, its VP of Special Projects. For 12 months the team have applied every piece of science to find the optimal  conditions for maximum performance. You can read the whole story here.

The three runners included Eliud Kipchoge, the Olympic champion, and a Nike-sponsored athlete. They searched the world for the best location, the best surface, the best date, weather conditions, time of day. They deployed a Tesla electric car programmed to drive at exactly 2 hour pace, with a clock showing predicted time. They brought together 100s of Nike’s athletes together to act as pacemakers, taking turns with peloton-style drafting. And they created a new shoe, the VaporFly Elite, which promised a 4% advantage, exactly the amount required to knock 3 mins off the world record. Even the Twitter livestream and collaborative feed was innovative. Everything was ready. Nike CEO Mark Parker was also on hand with his camera ready to capture history.

Of course, all of this is stage managed. Some would argue it is against the purist principles of human sport. How can it compare to a real race, in a city centre, where the wind blows unpredictably, and there is no perfect Tesla to pace you? Indeed it won’t count as a world record, because it wasn’t a real race. But it was about pushing boundaries, exploring possibilities, and moving the marathon world forwards. As a brand Nike should be applauded for putting so much effort into the pursuit of progress, rather than just selling products. And as a marketing promotion, it was an incredibly cost effective way of communicating a brand’s essence.

This is what brands are about. Breaking2 was brand innovation at its best. More than a product, or even an experience, but a fundamentally big idea that move people. As Nike founder Bill Bowerman said “The real purpose of running isn’t to win a race, it’s to test the limits of the human heart.”

Here is how the “moonshot marathon” unfolded, as retold by Athletics Weekly magazine:

Showing remarkable strength both in body and mind, Eliud Kipchoge proved on Saturday morning that a sub-two-hour marathon might be a lot closer than some may have originally thought.

Clocking 2:00:25 for 26.2 miles in a controversial Breaking2 event organised by sportswear giant Nike in an attempt to breach the barrier, the Olympic champion further reinforced his position as arguably the finest marathon runner of all time.

While Kipchoge’s time, set on a Formula One track in Monza in Italy, won’t count as an official world record, it does go some way to further proving what the human body is capable of.

The 32-year-old Kenyan has an official marathon PB of 2:03:05, set when winning his second London Marathon title last year. The fact that the sub-two-hour attempt included the use of pacers being subbed in and out is among the reasons why his new best time isn’t eligible for record purposes but it is an incredible two minutes and 32 seconds faster than the official world record mark set by Kipchoge’s countryman Dennis Kimetto in Berlin in 2014.

“I believe in good preparation and good planning. If you have that then those 25 seconds will come.”

Every element of the attempt had been meticulously planned, from the time of day the run took place (05:45 local time) to the 2.4km loop course and the team of runners, which also included Eritrea’s Zersenay Tadese and Ethiopia’s Lelisa Desisa as well as the army of pacers.

Then there’s the shoes – the new Nike Zoom Vaporfly Elite worn by athletes during the attempt. The footwear features a full-length plate “to increase stiffness and provide a propulsion sensation”. ‘Breaking2’ had generated mixed reaction in the lead-up and while there was certainly a corporate feel to it, nothing can be taken away from Kipchoge’s impressive achievement.

Starting out toward the back of an arrow formation of pacers, Kipchoge was joined by world half-marathon record-holder Tadese and two-time Boston Marathon winner Desisa.

Their first 5km split was timed at 14:14 as they aimed for 14:10, but the group picked up the pace soon afterwards and there was a projected finish time of 1:59:56 at that point.

Not long after this, the attempt relied on Kipchoge alone, with Desisa having dropped off the pace just after 15km and Tadese losing touch after 21km.

Kipchoge averaged around 4:36 per mile, with around 4:34.5 needed to dip under two hours.

As USA’s Olympic medallist Shalane Flanagan expressed with the end of the attempt in sight: “With each step Eliud Kipchoge is taking, he is making history.”

On the day that marked the 63rd anniversary of Sir Roger Bannister’s first ever sub-four-minute mile, this was a barrier that could not be broken, but it remains a target for another time.

“I can say it is possible for a human to run under the two-hour mark,” said Kipchoge. “This journey has been good. It has been hard. It has taken seven good months of preparation but I am happy to have done that. I think this is history.”

Nike’s Breaking2 project was brand innovation at its best. Beyond the product, beyond the business. It was about what the brand is really about – its purpose, its difference, and its personality … For Nike it has always been about challenging barriers – exploring new possibilities, enabling people to achieve more, moving the world forwards in its own relevant way. As Nike’s CEO Mark Parker said afterwards, “whilst we didn’t quite break 2 hours today, we brought the barrier much closer, and the world now knows that it is possible”.

One comment on “Nike’s Breaking2 is brand innovation at its best … inspiring people to do more, moving the world forwards”