Designer Danes … Just Eat to Joe and the Juice, Lego and Pandora … Who are Denmark’s most disruptive innovators?

Danes love to innovate. They love to create and play, to appreciate design and newness. From your earliest childhood memories with Lego bricks, to the compulsion of Movie Star Planet, the dream of sinking into your BoConcept chair and turning up your Bang & Olufsen sounds, Danish brands have spread with simplicity and sophistication across the world. The EU ranks Denmark as Europe’s second most innovative nation, behind Sweden, whilst the WEF ranks Denmark globally at eighth.

I have been working in partnership with the City of Odense (birthplace of Hans Christian Andersen, Europe’s new robotics hub, and the home of Thinkers50 in Europe) and wanted to explore which Danish companies are changing the game. Over the last 18 months I have run a series of Business Innovation Labs for Danish business leaders, and learnt much of what they do best, and what inspires them.

I’m looking for companies that are shaping markets in their own vision, through big ideas, radical innovation and creative delivery. Globally we always talk about the likes of Apple and Tesla, Nespresso and Xiaomi, but who are the more local companies who are equally good at rethinking local, and global, markets. Here are the current nominations for Danish “Gamechangers”: 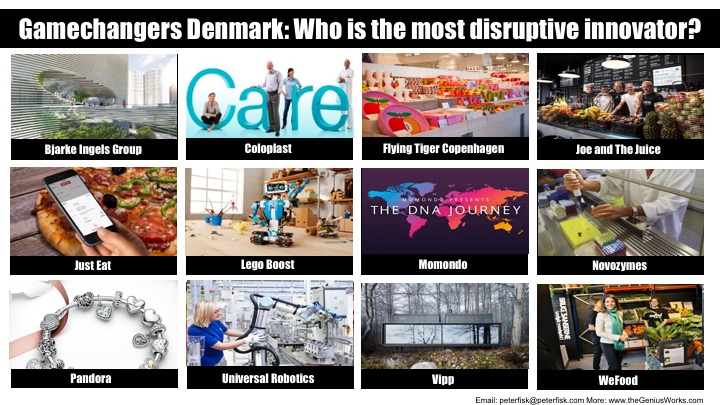 Arla Foods is the seventh largest dairy company in the world, and the third largest cooperative, formed through the merger of Sweden’s Arla and Denmark’s MD Foods in 2000. The Aarhus-based company has  19,000 employees across 30 countries and 12,700 dairy farmer owners in Denmark, Sweden, United Kingdom, Germany, Belgium, Luxembourg and the Netherlands. It is most famous for brands like Lurpak (owned by the Danish Dairy Board), and for its innovative range of milks, cheese and yogurts.

From a power station topped with a ski slope, to a flood-defence park in Manhattan – there’s no such thing as can’t for architect Bjarke Ingels and his team. “Architecture is like a sort of gentleman’s sport where you only really get to do it when you’re old,” says the 41 year old Dane. He takes pleasure in pointing out that his current West 57 project in New York has a larger budget than Avatar, the most expensive movie ever made. His company is called BIG, a reference also to his work which is characterised by big ideas, big gestures and, increasingly, big scale and big ambition.

Founded in 1957, Coloplast develops, manufactures and markets medical devices and services related to ostomy, urology, continence and wound care. Ranked #33 in the Forbes’ list of the world’s most innovative companies, it supplies products to hospitals and institutions as well as wholesalers and retailers. In selected markets, Coloplast is a direct supplier to consumers.

Coisbo is a passion, a special brewing­­ style, craftsmanship with a sure touch, the very best ingredients, good design and a well-balanced taste. Former Danish policeman, Anders Coisbo believes that brewing beer is about giving people sensory experiences. His beer is the result of a journey­ that started in December 2007 from his home kitchen in the north of Funen with his very first Christmas beer. Today, he produces more than ten types of beer, exported around the world.
.

Founded in 1933 by Mads Clausen, Danfoss is a global producer of products and services used in areas such as cooling food, air conditioning, heating buildings, controlling electric motors, compressors, drives and powering mobile machinery. Danfoss, with 24000 employees and based in Nordborg, is also active in the field of solar and wind power as well as district heating and cooling infrastructure that targets entire cities and urban communities.

Tiger (now known as Flying Tiger, after a trademark dispute with Japanese brand Asics Tiger) is a great place to browse, and walk away with something you never expected you needed. It describes itself as a variety store, with low priced every-day items from notebooks to kitchen utensils, games and liquorice. Lennart Lajboschitz opened the first store at Islands Brygge in Copenhagen in 1995 and now has 630 stores across the world. It takes its name from how the Danish pronunciation of the animal name, tiger, sounds roughly the same as the Danish word tier, used to denote a ten kroner coin.

Jesper Buch founded Just Eat in Denmark in 2000, an online food order and delivery service that acts as an intermediary between independent restaurants/take-aways and customers. The platform allows customers to search for local take-out restaurants to place orders online, and to choose from pick-up or delivery options. In 2006, he moved to London and set up a team headed by sales director David Buttress, and now operates in 13 countries in Europe, Asia, Oceania, and the Americas. In December 2016, Just Eat announced that it was acquiring HungryHouse from its biggest competitor, DeliveryHero. The delivery business’ global revenues now exceed Euro 500 million.

8. Joe and the Juice

Joe and the Juice recently launched in New York offering coffee (or juice), wholesome sandwiches and a side of “edgy”.  Plus a liberal dose of Danish furnishings, dark ambient lighting and the good music. The brand started out as a little privately owned juice-bar inside an expensive furniture shop in central Copenhagen. The founder Kasper Basse is a former karate champion, with a goal to create some healthy take-away place, that in the end could be as big as Starbucks. He grew the business across Denmark, making good profits, and after around 10 years sold part of the company to a Swedish bank, and now working with him to drive global growth.

We all know the Danish toymaker. The Billund-based company has just launched a new platform called Lego Boost, a hybrid building and coding set that the company says combines the play experience of a traditional Lego set with an app-based coding play experience. Lego Boost, developed for children aged 7 or older. It comes with building instructions and coding commands to create five possible Lego creations, including a robot and a cat. The app also includes more than 60 activities related to building and coding. The bricks also come with built-in sensors that can detect color.

Momondo was founded in Denmark in 2006 and is headquartered in Copenhagen. It is a metasearch engine for global travel – flights, hotels, cars – and distinctively provides inspirational blogs, stories and tip for its travellers. But its marketing looks beyond the logistics of just getting there. It focuses on why. “Let’s Open Our World” is an invitation to travel across boundaries, embrace our differences and open our world. In 2016 Momondo asked 67 people from all over the world to take a DNA test, and it turns out they have much more in common with other nationalities than they would ever have thought.

Ranked in the world’s 100 most innovative companies by Forbes in 2016, Novzymes is the world’s leading producer of industrial enzymes, creating the first enzyme solution to be stabilized in laundry bars. Easyzyme gives consumers around the world the opportunity to hand-wash clothes with less effort, less need to rewash, and less use of water. A great example of sustainable innovation.

Pandora’s contemporary jewellery is sold in more than 100 countries through 8,900 points of sale, including more than 1,900 concept stores. Founded in 1982 , the Copenhagen-based company employs more 17,800 people worldwide of whom approximately 12,000 are located at Pandora’s manufacturing centre in Gemopolis, Thailand. Selling modular and addictive jewellery solutions, the brand has engaged its consumers in an ongoing relationship, buying and gifting, customising the items for them and their occasion.

UR is dedicated to bringing safe, flexible and easy to use 6 axis industrial robotic arms to business of every size, all over the world. Based in Odense, they develop industrial collaborative robot arms that automate and streamline repetitive industrial processes. This approach enables production departments to assign their staff members more enjoyable tasks – creating jobs that provide them with new challenges that add value to the company.

Vipp produces everyday products like rubbish bins and toilet brushes that are rarely seen as interesting. That’s until they got Lady Gaga’s costume designer to create evening dresses for trash. In 2015 Vipp  created a “plug and play getaway” home, a prefab home made of fifty thousand pounds of glass and steel. It can be built in 3 days using just bolts for the modules and 9,000 screws. It can house 4 people: 2 on a daybed and 2 in a loft bedroom.

Denmark’s new supermarket WeFood sells produce no other stores will sell due to damaged packaging, wrong labels and food nearing their expiration dates. “Wefood receives goods from supermarkets and shopkeepers who do not want to sell them anymore–mainly because they have passed the “best before” date,” says Jutta Weinkouff from DanChurchAid, the nonprofit running the new store. All of its products are still legal and safe to sell to consumers and cost roughly 30 to 50% cheaper than regular supermarkets. Food waste is a major issue for our world with 795 million people undernourished, and cost of global food waste roughly $1 trillion per year.

Who do you think are the best Danish innovators? .

My “Gamechangers” book is now available in Danish, from Eidos Books and sponsored by Thinkers50 Europe. You can download a free sample here.

Join me for Gamechangers Denmark about smarter innovation and faster growth at the Odense Entrepreneurs Day at Nordea in Odense on 8 May 2017.

Join me for Thinkers50 European Business Forum which I will be hosting and featuring many of the world’s top business gurus in Odense on 9-10 May 2017.