Mapping Innovation … start with a problem, not an idea … then decide the right approach to innovate

Innovation comes in many shapes and sizes, typically an organisation has a whole portfolio of innovations at play, from incremental improvements to game-changing breakthroughs. Of the portfolio is often not well structured or balanced, and the approaches to innovation are rarely thought out, relevant to the dimensions of the project.

A new book Mapping Innovation: A Playbook for Navigating a Disruptive Age by Greg Satell might help.

Greg starts his story like this: “As a boy, Albert Einstein liked to imagine what it would be like to ride on a bolt of lightning. In many ways, it was a typical childhood fantasy. If he were born in another time, you could imagine him learning to speak Klingon or becoming immersed in the lore of the Jedi. Yet Einstein took the idea so seriously that it became the first of his famous thought experiments.

This seems incredible because it’s so alien to our everyday experience, but today it’s easily proven. Simply get in your car, turn on the navigation system and follow its directions. GPS satellites are calibrated according to Einstein’s equations, so if you get to where you want to go you have, in a certain sense, proved the theory of relativity.

What’s also interesting about Einstein’s theory is that he didn’t discover it in the same sense that Columbus discovered America. He didn’t uncover a single fact that wasn’t known to every working physicist at the time. His genius was to see a problem where nobody else realized that one existed.

Every age comes with its own unique problems. For the past 20 or 30 years, we’ve mostly been occupied with finding new applications for technologies built in the 50s and 60s, like microchips, relational databases and the Internet. That effort spawned entirely new industries, such as personal computers, enterprise software and e-commerce.

Yet today, many of those old paradigms are running out of steam. Moore’s Law is slowing down and will soon grind to a halt. Open software has created the need for updated database structures and the Internet has proven to be dangerously insecure. Solving each of these problems will create fantastic new opportunities.

Consider the case of quantum computing, which has the potential to be millions of times more powerful than current technology. A full-scale commercial version is probably still five to ten years away, but is already being tested in areas as diverse as medicine, financial services and artificial intelligence.

It will also create enormous problems to be solved. For example, it will render current encryption technologies obsolete, so business will have to invest in quantum safe encryption. Because quantum computers work fundamentally differently than classical ones, new computer languages and software protocols will need to be devised.

And that’s just one example. Take a look at the Gartner Hype Cycle and you will find dozens of emerging technologies that will have an impact over the next decade. Each one comes with its own problems to solve and each of those problems represent new business opportunities. In some cases, entirely new industries will be created.

Anyone who takes even a casual look at the future can’t help but be bewildered. These days, even teenagers can build websites and smartphone apps, but highly trained specialists struggle to understand the implications emerging technologies like genomics, nanotechnology and robotics. That presents a dilemma for business leaders: How can you plan for a future you can’t predict?

The simple answer is you can’t and you shouldn’t even try. Technology today moves so fast — and in so many directions — that anyone who thinks that they can truly see the future is just fooling themselves. But what you can do is uncover problems related to your business, your customers and in new emerging markets.

That’s one thing that truly great innovators do differently. They constantly seek out new problems. IBM routinely sets up grand challenges, like beating humans at Jeopardy. Experian set up its Datalabs unit to identify problems its customers are having that they can turn into new businesses. Google’s 20% time acts as a human powered search engine for valuable problems.

The truth is that it’s more important to explore than predict. To create anything that is truly pathbreaking, you need to look for it in new places.

Management in the 20th century was, in large part, the art of strategic planning. You gathered information about markets, competitors and other trends and then planned accordingly. Strategy was like a game of chess. You planned each move in response to a changing board and in anticipation of competitors moves.

Yet today, technology cycles move faster than planning cycles ever could, so we need to take a more Bayesian approach to strategy. Instead of trying to get every move right — which is impossible in today’s environment — we need to try to become less wrong over time. Essentially, we need to treat strategy like a role playing game, taking quests that earn us experience and artifacts along the way.

And that’s what makes ideas like those of Birdseye, Schwab and Jobs so great. They solved important problems that people cared about. So if you want to innovate, don’t look for a great idea, look for a good problem.

Greg’s main tool is The Innovation Matrix to map out the different types of innovation and how to approach them: 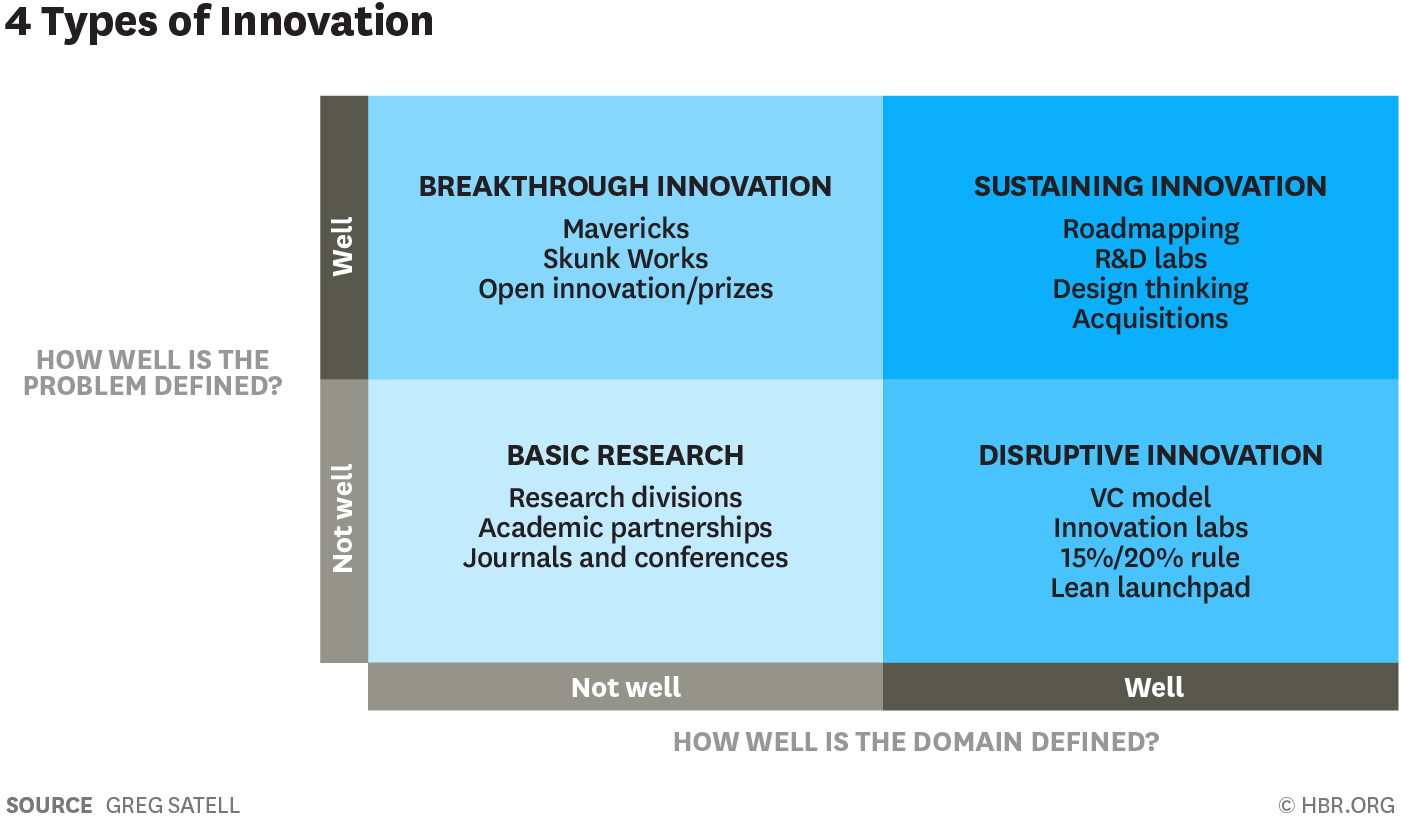 Start with a problem, not an idea.

There are many misconceptions about innovation, Greg believes the most important one is that it’s all about ideas. Yes, every innovation starts out as an idea but more importantly the idea should be preceded by a very interesting problem.

There are many ideas out there looking for a problem to solve, it’s a lot of throwing ideas at the wall to see what works. This results in a lot of wasted time, resources and failure.

Another way to look at this is questions become more important than answers as you move away from the core of what you do; so better questions will help you figure out the right problem to solve.

The point is don’t look for a great idea, look for a good problem; which makes it easier to figure out a path forward. Because if you start with the wrong problem, it’s unlikely you’ll ever arrive at an effective solution.

There is no one true path to innovation, you have to create your own playbook

Not all innovation is disruptive, mostly its sustaining; the type that keeps strengthening and extending the core. With this perspective in mind, it’s easy to see why there are so many me-too businesses as they all try to one up each other following the same playbook.

The difference between innovators and non-innovators is a portfolio approach to innovation, where they approach the different types of innovation in their own particular way. Greg maps out how this looks like in various examples on how companies like Google, IBM and others innovate; neither follow the same approach and thus their respective “maps” look different.

As Greg says in the video below, all great innovators do things differently:

Of course there are many other approaches, models and books on innovation. Here are some of the most useful: