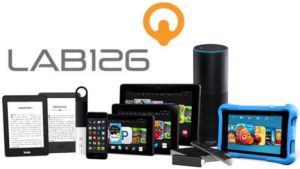 In 2004, the Amazon team had a vision: To improve upon the physical book, making it easier than ever for customers to discover and enjoy books. Gregg Zehr, vice president of hardware engineering at Palm Computing at the time, was part of the group that accepted the challenge. In October 2004, Gregg formed a small team, moved into a shared space in a Palo Alto law library, and got to work. Amazon Lab126 was born.

The Lab126 name originated from the arrow in the Amazon logo, which draws a line from A to Z in “Amazon.” In Lab126, the 1 stands for “A” and the “26” stands for “Z.” The subsidiary is an Amazon lab of innovation, research, and development.

After years of research and development, the first Kindle e-reader launched with 90,000 e-books on November 19, 2007. The Lab126 team watched a live broadcast of the New York announcement event, holding their breaths as Amazon CEO Jeff Bezos introduced Kindle. 5.5 hours later, Kindle was sold out.

The team has expanded rapidly since then, producing a variety of new, innovative products from Amazon Fire TV to Amazon Echo. The team engineers devices with the same spirit that fuelled the first inventors. They’ve come along way, yet as Jeff Bezos likes to remind everyone, it’s always day one.