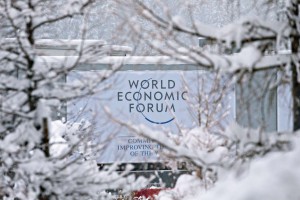 With over 400 sessions on the official programme, covering everything from the rise of populism to the global economic outlook, you’d be forgiven for feeling confused by what just happened in Davos. While it would be impossible to condense it all into one article, here are some of the biggest stories. Before the meeting even started, China was already making headlines: not only was Xi Jinping the first Chinese president to come to Davos, but he was joined by the largest delegation the Asian giant has ever sent.

The main sense throughout the meeting was that we’re living through a geopolitical shift not seen since the end of the Cold War – from a unipolar world, with one superpower, to a multipolar one. “We are moving into a world in which you have many great powers,” economist Nouriel Robin claimed. “These great powers either work together, or there will be increasing frictions and conflicts on trade and currency, on economics and finance.”

In the first speech China’s President Xi Jinping presented himself as a champion of economic globalisation, saying that despite a Western backlash, it still had the power to change people’s lives for the better. “It was the best of times; it was the worst of times.” he reflected. He defended globalization in direct opposition to about to about-to-be-President Trump’s recent criticism on the issue. The Chinese leader even prodded the current president-elect without using his name. Jinping’s major quote: “Pursuing protectionism is just like locking one’s self in a dark room. Wind and rain may be kept outside, but so are light and air. No one will emerge as a winner in a trade war.” On globalisation, he concluded “Honey melons hang from bitter vines; sweet dates grow in thistles and thorns.”

Sergey Brin, the co-founder of Google said he did not foresee the artificial intelligence revolution that has transformed the tech industry.  “I didn’t pay attention to it at all, to be perfectly honest. People tried it, they tried neural nets and none of it worked.” Fast-forward a few years and Google Brain, the company’s AI research project, has advanced so much that it now, as Brin put it, “touches every single one of our main projects, ranging from search to photos to ads … to everything we do. The revolution in deep nets has been very profound, it definitely surprised me, even though I was sitting right there.”

92% of people worldwide live in places where air pollution levels exceed suggested safety limits, at least 1.8 billion people still lack reliable access to safe drinking water, and 2016 was the warmest year on record, 1.2% warmer than pre-industrial levels. Climate change guru Al Gore, admonished his future president Trump for his irresponsibility saying “Our efforts to solve the climate crisis are in a race against time, because we are still using the Earth’s atmosphere as an open sewer, adding 110 million tons of man-made global warming pollution each day, and we are moving closer to several potential thresholds of unrecoverable damage. However, businesses and investors – alongside governments – are making significant progress on solutions. Markets are recognizing that fossil fuels are a bad bet; governments are acting to reduce their national emissions; and people are demanding action.”

Joichi Ito, the Japanese entrepreneur, activist and director of the MIT Media Lab said that governments and technology firms are not going to be able to solve many of the imminent problems that the world faces on their own; they are going to have to work together. He pointed out that this will require groups with fundamentally different world views to collaborate. “Typically the people who are focussed on computer science and AI don’t like the messiness of the real world,” said Ito. “Most engineers don’t understand the law; most engineers don’t understand why governments exist.” MIT even has a Charm School that tries to equip students with the skills to become future tech leaders and better deal with the real world of non-geniuses.

Jack Ma, the billionaire chairman of Alibaba made waves when he criticized the U.S. for spending $14.2 trillion in the past 30 years on 13 overseas wars instead of putting part of those funds into America’s own infrastructure. “You’re supposed to spend money on your own people, right? We should spend money on those people who are not good at schooling. The US hasn’t distributed the profits earned from globalization “in a proper way.”  Ma was also critical of the role of Wall Street in bringing about the world financial crisis in 2008” he said.

Founder of Dalian Wanda Group, Wang Jianlin is a former People’s Liberation Army soldier and now the wealthiest person in China, with interests in real estate, sport and entertainment. Wanda is the world’s largest movie theatre operator. China has the largest number of screens in the world, and 15,000 more were added last year, mostly in shopping malls, with a 30% year-on-year growth. It is also involved in producing films, especially the trend of co-productions between foreign and Chinese films, such as The Great Wall, starring Matt Damon, which has already made $200 million in China. Wang sees his investments in entertainment and sports as a key addition to his real estate portfolio: “Entertainment makes you happy, sport makes you healthy.” Last March, he bought a 20% stake in the Spanish football club Atlético Madrid, which will train young Chinese footballers. “We all know football clubs don’t make money, they burn money,” he said, but every business is about more than profit.

Beyond Davos … next stop Odense

Tickets are limited, and available now from europe.thinkers50.com