Peter’s Laws … The Creed of the Persistent and Passionate Mind

This week we’re exploring the power of “exponential thinking” with three days of fantastic workshops and events by the GeniusWorks, and some of the world’s leading business gurus are joining us too.

Peter Diamandis has probably done more than anyone to establish “exponential thinking” in business. He was born of Greek immigrant parents in 1961 in the Bronx, New York. He attended the Massachusetts Institute of Technology, where he received his undergraduate degree in molecular genetics and graduate degree in aerospace engineering. After MIT, he attended Harvard Medical School, where he received an M.D. and in 2005 he was awarded an honorary Doctorate from the International Space University.

Diamandis is considered to be a key figure in the development of the personal spaceflight industry. He is the Founder and Chairman of the X-Prize Foundation – an educational non-profit institute, focused on developing large incentive prizes to bring about radical breakthroughs for the benefit of humanity in fields such as Genomics, Automotive, Education, Medicine, Energy and Commercial Space Exploration.

He is also the co-Founder and Managing Director of Space Adventures – the only private company to send private citizens to the International Space Station aboard the Russian Soyuz Spaceship, and the CEO and co-founder of Zero Gravity Corporation, which offers parabolic weightless flights to the general public.

More recently, he has created the Rocket Racing League and Co-Founded the International Space University and the Singularity University.

A self-admitted nine-year-old child-space-enthusiast, Dr. Diamandis is a visionary who dreams big and has the resume to prove that “the best way to predict the future is to create it yourself.”

So how does he really think? 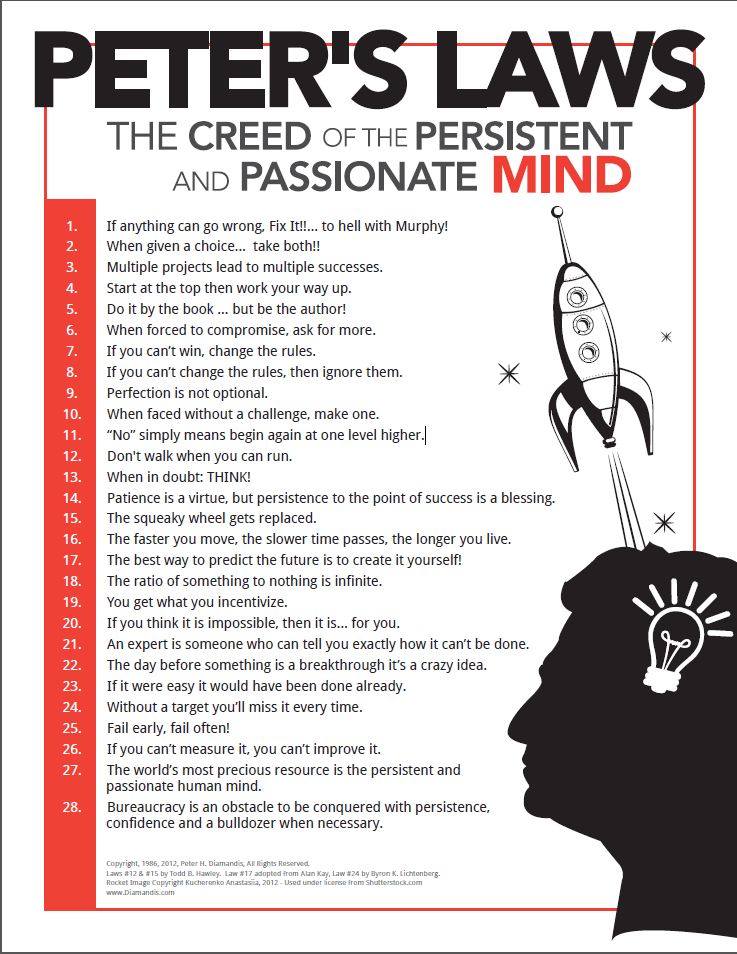