Skateboarding brand Supreme is selling red clay bricks for up to $1,000 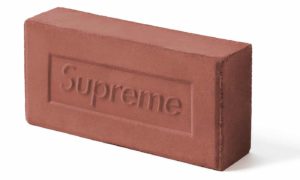 A red clay brick designed and sold by skateboarding brand Supreme is selling on eBay for $1,000, after originally selling out in a single day.

The item, part of the Supreme skateboarding brand’s accessories line that has previously included a hammer, calculator and fire extinguisher, is branded with Supreme’s logo and has been highly anticipated by fashion gurus since its preview last month.

It sold out at its original price of $30 within minutes, and has since appeared online with extremely high price tags.

While it is unclear whether the brick was released as a statement, a joke or as part of a secret endorsement, some have speculated that Supreme might be playing on the term “bricking a fit” – to put together a failed outfit.

“I don’t know why, I just think having a Supreme brick would be funny. I’d also like to store it in this lucite box,” Max Berlinger, GQ style editor, said in August.

Another user commented: “That’s just for a bare ass house. No insulation, no electric wiring, no cable wiring, no internet wiring. That doesn’t event account for floors. Either you’d spend extra money to have brick floors, or it would just be dirt. I know exposed brick drives up the price of living spaces, especially in apartments in New York … I wonder if the resell price for bricks would affect the Supreme brick housing market? I mean, you’d figure that a brick could very well go for like $60-70 resale if it’s extremely hyped. That would make your house worth a little over $7m at $60 per brick. This might be a good business investment.”