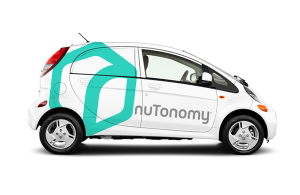 Self-driving cars have been much talked about over the last 12 months, but for most of us it still seemed like science fiction. Distracted by the sleek electric vision of Tesla, self-driving seemed like a step beyond in terms of industry change, but has now suddenly become a reality.

In Singapore, today. The world’s first self-driving taxis were launched, not by Google, Tesla or Uber … but by nuTonomy … Simply download the app, hail the taxi, and its free. Well, at least the trial phase is. And just for reassurance, there’s actually still somebody in the driving seat, to monitor performance and as a back-up.

nuTonomy is a US-based start-up developer of software for self-driving cars. The company was founded in 2013 by two world-renowned experts in robotics and intelligent vehicle technology, Drs. Karl Iagnemma and Emilio Frazzoli of MIT. The company has offices both in the US and in Singapore.  Earlier this year, nuTonomy was the first company to get permission from the Singapore government to test self-driving cars, in a small area of the town. It’s now progressed to taking passengers.

Whilst many people looked to the conventional car manufacturer brands to shape the future, it was always more likely that those with adjacent capabilities (like software, or charging, or marketing – Google, Better Place, or Uber) would “change the game” – redefine customer aspirations, business models, and the way the industry works.

nuTonomy is not a car manufacturer, so don’t expect sic-fi-looking cars to start navigating that Orchard Road traffic today. Instead a range of Renault and Mitsubishi electric vehicles have been equipped with the company’s complex system of cameras and lasers that operate like a radar to monitor the car’s surrounding. Which is certainly a step up from autonomy’s initial trial vehicles, which were electric golf carts.

The taxis will run in a limited 4 sq km area in the west of Singapore, with designated pick-up and drop-off spots so you can’t yet get on or off wherever you prefer.

The choice Singapore as a start-up location is important. It is already a taxi heaven. Owning your own car is mind-bogglingly expensive and many people take taxis on a regular basis. Cab rides are cheap and there’s a very high demand. Add the rather disciplined and organised approach to traffic. When Singaporeans talks about a traffic jam, all they mean are a few cars more than usual at a traffic light!

nuTonomy’s goal is to expand it to a fully self-driving taxi fleet in Singapore by 2018.

Of course nuTonomy is not only company with a self-driving vision. Uber seeks to launch its own service on the streets of Pittsburgh USA over the next few weeks. Google was one of the first to openly declare its vision, and seeks to have been testing driverless cars at its GoogleX Moonshot Factory for years now. Tesla too, has a bold vision. Not just of driverless cars, but driverless car sharing was a corner stone of Elon Musk’s new strategy launched last month.

So remember today as one of those pivotal moments in the fast-changing world of automotive. Like every industry, the game is changing at incredible speed. As a like to start my keynotes, we will see more change in the next 15 years, than the last 300 years.

Who will be the nuTonomy of your market? How could it to be you? Time to shape the future in your own vision.