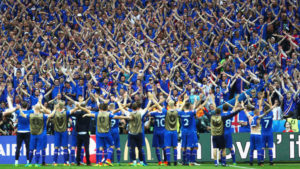 Iceland’s unlikely journey to the quarter-finals of Euro 2016 has undoubtedly been one the stories of the tournament.

With a population of 330,000 people, the Scandinavians’s lion slaying exploits and excitable commentators have inspired the rest of Europe to adopt the nation as their second team.

Along the way to an unlikely knockout game with France,  Iceland inflicted a humiliating defeat on England. But despite the damage they’ve inflicted on the morale of English football, Europe has fallen in love with Iceland.

And arguably their greatest legacy will be the – now iconic – ‘Thunder clap’ celebration that is guaranteed to make an appearance in the Premier League next season.

Although Lars Lagerback’s side eventually succumbed to hosts France in the quarter-final, thousands of people gathering in the Reykjavik fanzone to show their support with a final ‘Viking’ war chant that, along with the team’s achievements, has caught public attention around the world in recent weeks.

The celebration has become a common practice for victorious teams at Euro 2016, but where did the song come from?

The claps and chants become increasingly quicker before culminating in one final clap, accompanied by a cry of ‘huh!’

The celebration has proved so popular that it has been adopted by other European nations at the tournament. Wales followed up their quarter-final win over Belgium with an impromptu version of the Icelandic celebration.

Hosts France decided to mark their semi-final victory over Germany with a rendition of the chant.

The celebration has been described as a ‘Viking war chant,’ and most people assume the song comes from an ancient pre-battle ritual.

However, according to Icelandic publication Morgunbladid, the song was adopted by Icelandic club Stjarnan on a trip to Scottish side, Motherwell.

Fans of the  Reykjavik-based side were first introduced to the terrifying terrace chant in a Europa League game with Scottish Premier League side, Motherwell.Motherwell’s slow-cap then evolves into the club’s trademark song, ‘Since I Was Young.’

Despite eventually being knocked out of the Europe League by Inter Milan, fans of the Icelandic club introduced the clap to their national side.

Here’s the original version in all its glory: