Demonstrating “exponential growth” by folding a sheet of paper in half … to the moon and beyond! 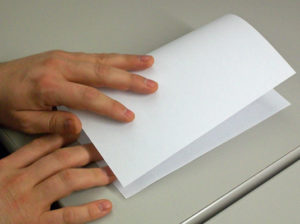 Take a sheet of paper, ordinary A4 size (letter size if you’re in the USA), and fold it into half.

Fold it a second time, and a third time. It’s about as thick as your finger nail. Continue folding if you can. At 7 folds it is as thick as a notebook. If you would have been able to fold it 10 times, it would be as thick as the width of your hand. Unfortunately, it isn’t possible to do so more than about 12 times.

Try it for yourself. At seventeen folds it would be taller than your average house.

“I don’t believe you!” you shout. That is what I thought till I started calculating the thickness myself. If you do not want to pull out your trusty calculator here is a table that contains what I have described above.

This table should convince anyone about the rapidity of exponential growth. In this example, it does double at every step; usual growth is just a few percentage points but the core idea is the same.

As a different example, take this extract from Philip & Phylis Morrison’s book “The Ring of Truth” …

A fascinating advance in that direction – to be sure, without atoms at all in mind- has long been practiced in the high art of the professional Chinese chef. We dropped in on such a virtuoso splitter of matter.

Chef Mark kneaded high-gluten white flour carefully along with the other ingredients of noodle dough in correct proportions: three cups of flour, half as much water, one-quarter teaspoon each of salt and baking soda. He vigorously swung and stretched the lump of dough out into a heavy single strand the length of his full two-arm span. Then he folded that long thick strand in half, and pulled the dough out again into its original length, so that two thinner strands now passed from one hand to the other. Repeat, repeat, repeat…

Chef Mark: “Hello, everybody. I am the chef of the Dragon House in Wildwood, New Jersey. Today I will make the kind of noodles called so. Make the dough strong and smooth, keep the dough smooth and strong, and you will have noodles on the table.”

Wow! Almost five feet long, they are called dragon’s beard noodles -very fine, like a human hair. In two minutes, Chef Mark had drawn out four miles of fine noodles. (They were really two or three times as thick as human hair.) Legendary chefs of the past have gone to thirteen doublings, while experienced home noodle makers can complete eight or ten. But consider that if Chef Mark had continued the doubling, it would take only thirty-five more steps of doubling, six minutes’ work, before he would have reached what we know as atomic size. Of course, the actual procedure would fail long before that idealized atomic limit is reached.

The tantalizing nature of the doubling process is that the subdivision is so rapid. Some forty-six doublings would make noodles of true atomic fineness, in principle. But note that such an incredible feat would produce not a mere few miles of dragon’s beard, but noodles long enough to stretch to Pluto and beyond!

And this story, which is often told in India …

Once upon a time, long ago there was a king who ruled a prosperous land. Poverty was unknown there and every person was gainfully employed. Hence the sight of a beggar making his way along Main Street caused quite a stir in the capital of the land. The king demanded to see this strange man. When brought to him the beggar revealed that he indeed did not have any possessions nor any money for the purchase of food. The king magnanimously offered all-you-can-eat meals for the rest of the week and clean clothes so that the beggar could continue his journey to the next land. Surprisingly, the beggar declined the royal offer and asked for a modest favor. The king demanded to know what the wish was. The beggar humbly requested a grain of rice for the first day, two on the second, four on the third day and so on – doubling the previous days contribution.

The king looked through the window at the overflowing granaries and almost accepted it when his grand vizier, remembering something that he had learnt in Elements of Numbers (Math 201 at the local University) advised his highness that he should reconsider. To calculate the implication of the wish he pulled out a dusty abacus to perform exponential calculations. He fumbled with it for a while but could not express the magnitude of the numbers involved because he ran out of beads. The king getting impatient with his vizier on such a simple wish from a poor man, officially granted the beggar the wish. Little did he know that he had sounded the death knell of his reign.

The next day the beggar came to claim his grain of rice. The townsfolk laughed at the beggar and said that he should have taken the king’s kind offer for a full meal instead of the measly grain of rice. On the second day he was back for the two grains. A week later, he brought a teaspoon for the 128 grains that was due to him. In two weeks it was a non-negligible amount of half a kilo. At the end of the month it had grown to a whopping 35 tons. A few days later the king had to declare bankruptcy. That is how long it was needed to bring down the kingdom.

For the pedantic ones I assumed that a grain of rice weighs 0.033 grams. By the way, I used whole rice and hence your mileage might vary.

A variation of this story comes from China where the beggar requested a grain for the first square on a chess board, two for the second square and so on for each square. The king would be bankrupt long before the beggar got to the sixty-fourth square on the chess board.