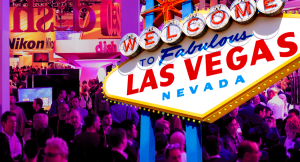 Here in Las Vegas, the world’s technology leaders and entrepreneurs are back for CES – the Consumer Electronics Show – the annual showcase of all things digital that could change the lives of consumers.  From Samsung to Xiaomi, entrepreneurs and investors – innovators from across the world will show off their new product concepts, whilst behind-the-scenes, deals will done to create the next big thing.

There is something a little surreal about it all – driven by tech possibility, rather than human need. The vast majority of exhibitors are tech junkies who clearly have an overtuned passion for possibilities, and limited interest in real people. For most of them, they hope their business will be snapped up by Google, Facebook or the like, before the crunch comes, and consumers have to actually pay money for their creations. This makes the relentless hype a little overbearing. At the same time, newness is created in the margins, so I’m intrigued by what will take off, what will engage the sceptical consumer, and maybe even make our lives better.

August is a maker of smart home security products including a smart lock and smart doorbell camera. Recently the company partnered with several on-demand services including AirBnB, Handy, and Fetch to help gain distribution and marketing for its products. The company continues to expand its partnerships and product offerings, which we can expect to see more of at CES.

Formlabs is a desktop 3D-printer that prints using stereolithography (printing made with resin). The company recently released the “Form 2,” and will is showing off the abilities of its new machine at CES.

iDevices develops apps and internet-connected home products that connect wirelessly within the Apple and Android ecosystems. The company has made a suite of connected devices, including a grill, a cooking thermometer, and more recently a thermostat and on/off switch, using Apple’s HomeKit technology.

Kidoz provides a safe way for children to discover content on mobile that’s appropriate to their age group. The company provides three offerings, a Kidoz SDK that helps developers increase engagement with kid-friendly apps, a Kidoz mode for kids to explore offerings themselves, and the Kidoz network which promotes kid-friendly content.

Leap Motion is a motion-control software and hardware company developing a sensitive 3-D motion-control and motion-sensing technology. This technology has been shown to work as a controller in AR and VR environments, as well as regular Mac and PCs.

Ninebot is the Segway reborn (literally, since the company acquired Segway and the related patents earlier this year). The company offers a variety of personal transportation vehicles that utilize the same technology that originally brought the Segway to fame.

Novasentis – next generation of haptic sensors

Novasentis is changing consumer electronics by creating tools that provide haptic feedback. The firm produces a film that is able to bend and change shape, allowing a device to respond to input with something resembling the sensation of touch. This has wide application in wearables, health technology, and any device that would benefit from increased sensory feedback.

Razer is one of the top gaming hardware companies, creating products in every category including laptops, mouse devices, accessories, and more recently — wearables. The company is already a unicorn, and we can expect them to unveil some of their newer gadgets at the showcase.

Virtuix has created a “motion platform” for virtual reality, a kind of step machine with motion trackers that allows people to explore virtual worlds without the side effect of motion sickness. The company sells a suite of products around the platform and focuses on the gaming space. The company raised more than $1M through their Kickstarter campaign.

What does this tell us?

So there you go – maybe a lot of fads and gimmicks, but maybe also some new clues to the future. Most likely these innovations will evolve and connect into better solutions. What is clear is that 2016 is the year of the convergence of gaming, wearables and robotics … when virtual reality and intelligent sensors, entertainment and productivity, big data and intuitive behaviour, start to converge into something truly transformational.

Don’t judge CES by the concepts themselves, but the futures which they allow us to imagine, and start to innovate.