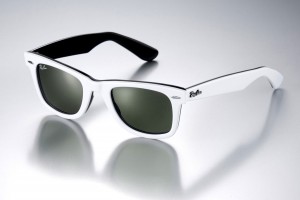 Italian eyewear giant Luxottica, which controls over 80% of the world’s leading eyewear brands, has never been shy about experimentation. It was early into the trend of using aerospace materials to make frames lighter and is now trying out 3-D printed frames in its factories. These new Ray-Bans come in denim, leather, wood and velvet. Luxottica’s Oakley brand is working with computer-chip maker Intel on a new line of smart eyewear due within the next year.

Luxottica had revenues of €7.3 billion last year and produced over 77 million pairs of sunglasses and optical frames.  Over half a billion people wear Luxottica glasses and the company has single handedly turned a once boring eyewear market into high fashion.  Their proprietary brands (68% of their total sales of frames) include two of the top sunglass brands in the world Ray-Ban and Oakley, as well as Vogue Eyewear, Persol, Oliver Peoples, Alain Mikli and Arnette. The Italian company also produces eyewear under license for every luxury brand you can think of, from Gucci and Prada to Stella McCartney and Tiffany & Co.

Competition comes from other manufacturers, but also online retailer like Warby Parker who have gone from zero to $100 million companies in only a few years. However, Luxottica holds the cards in brick-and-mortar retail: when competitors get too large, Luxottica can simply cut them out of their popular distribution channels. That’s exactly how they treated then-independent competitor Oakley in the early 2000′s.  Luxottica caused Oakley’s stock to plummet simply by carrying fewer of their sunglasses through Sunglass Hut, eventually leaving Oakley with no choice but to merge with Luxottica in 2007.