A day in the life of Nike’s shoe designer who became the CEO, Mark Parker

Forbes Magazine recently published a fantastic insight into the world’s Nike’s CEO Mark Parker, inside his office and his mind. Here is an extract:

On Nike’s pristine Beaverton, Oregon, campus, you might mistake him for one of the 21 PhDs who work in the athletic powerhouse’s top-secret research lab, but in fact, it’s Nike’s own CEO, Mark Parker.

Suited in a mix of creative/casual garments (blazer, polo, jeans, Nike Roshe sneakers) and a professorial bearing (quiet intonation, short beard, slight stoop) it’s difficult to square this somewhat unassuming figure with his position as the fourth-highest-paid head executive in the country.

A fanatical devotion to sneaker design and a technical fluency rare among CEOs propelled the 58-year-old Nike lifer to the top perch of the footwear and apparel giant, which has reached annual revenues of $24 billion, up 60 percent since he was appointed in 2006. “Have you heard the Japanese word otaku?” he muses.

“It means being deeply obsessed by the details of something. I relate to that.”

As a track star at Penn State (and an early tester for the magazine Runner’s World) who put in double-digit mileage daily, he used to tinker with his own running shoes, and it was this right-brained DIY sensibility that landed him at Nike’s R&D lab in Exeter, New Hampshire, in 1979 as a young designer.

He went on to work with the late Nike cofounder Bill Bowerman, the hard-edged University of Oregon track coach whose motivational quotes now adorn the walls of Nike stores. Fast forward 34 years later, and Parker is still directly involved in shoe construction, walking into meetings holding his Moleskine MSK.MI -2.30%  graph-paper notebook filled with doodles and wearing new prototypes on his feet—to the great alarm of his minders, charged with keeping said prototypes under wraps. 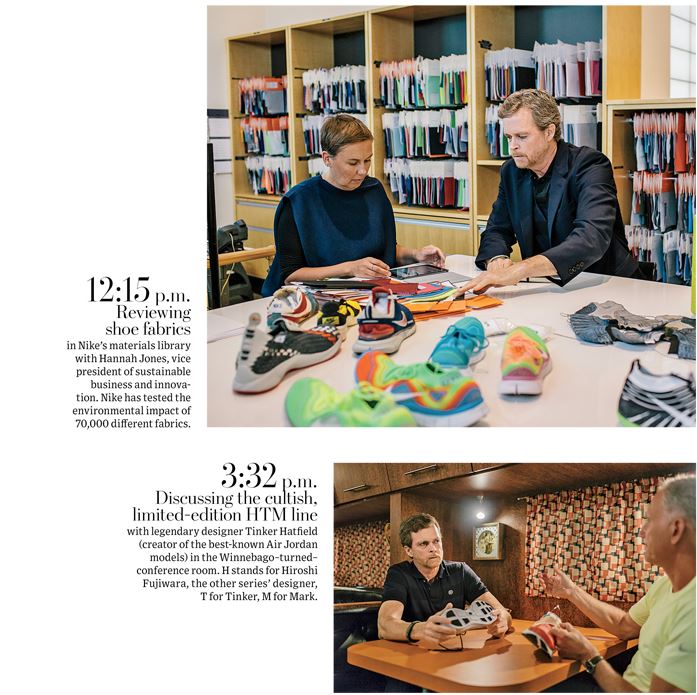 Parker has an uncanny eye for good design, whether it’s the two recent mega hits he green-lit at Nike—the ultralight Flyknit sneakers and the chic body-data-gathering FuelBand—or the works of surrealist painter Mark Ryden, whom he counts as a friend and whose pieces he collects. Parker’s cutting-edge sensibility is in part derived from his social network of art and music luminaries—which includes Kanye West and artist Tom Sachs —whose members congregate at salon-like gatherings he occasionally throws.

As he looks forward to the 2014 Olympics and World Cup (Nike will be producing shoe models and apparel that will be used by the athletes), his greatest advantage may be his ability to synthesize the input of disparate influences, from lab engineers to downtown artists. And beneath it all, he can still hear the old refrain his former boss, Bowerman, challenged young designers with: “Is that the best you can do?”