XPLANE is a design consultancy focused on aligning and engaging large organizations to accelerate results.

Visual thinking helps you organize your thoughts and improve your ability to think and communicate. It’s also a great way to convey complex or potentially confusing information. 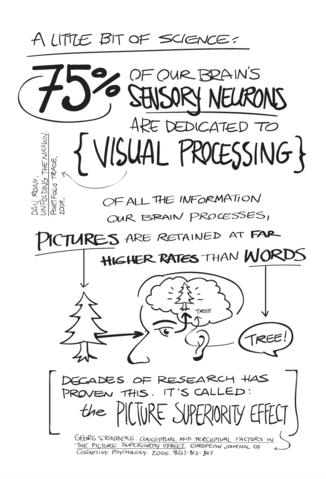 According to the dual coding theory by Allan Paivio, when we read text alone, we remember about 10% of the information three days later.

Add relevant images to the text, and we’re likely to remember 65% of the information three days later.

See for yourself in our 40-second video, “Why Visual Thinking Works.”

Why Learn Our ABCs?

Perceptual psychologist Rudolf Arnheim coined the phrase “visual thinking” in 1969, asserting that art is our most natural way of understanding the world.

This is not to say that visual thinking is simply illustration. It’s more.

Visual thinking is a language.

Like other languages, you have to learn the elements (the visual alphabet), the nodes (words), the links and frameworks (grammar), and the approaches (style) to become literate.

Mastering visual thinking should come naturally, but it takes practice, just as children must learn and practice the alphabet even though they already know how to talk.

Why? Practice builds muscle memory and wires brain cells to connect what we’re doing with our hands to what we’re thinking.

Visual thinking starts with the visual alphabet, a set of 12 symbols used for centuries starting with cave drawings of the Neolithic period.

The visual alphabet allows you to construct every letter in the English alphabet, any number, or any mathematical symbol, making it a toolkit of “Lego blocks” for creating anything with pen and paper.

From the alphabet, you then learn words, grammar, and style. This post visually presents the components of visual language and illustrates the power of visual thinking.

Once you delve into visual thinking, you’ll be surprised at how it opens exciting new ways to create and communicate with the world.

Become visually literate with a free PDF guide to visual thinking and sketch noting, straight from the design minds at XPLANE.