XL … The Future of Work by IFTF and Reconteur

As we face the fourth – and fastest – industrial revolution, businesses and individuals are confronted with a dizzying array of technological advances that most of us are struggling to keep up with, let alone decipher. However, it’s vital we all embrace and harness the power of digital in order to succeed. The Future of Work Report uncovers how businesses and employees can adapt to a digitally disrupted world, the six biggest future threats to business and the rise of the gig economy. In addition, it offers advice on ensuring staff maintain a good work-life balance, bridging generational divides, and building trust between employers and employees.

Working with the IFTF, we developed a “big picture” understanding of this changing world, summarised in the following infographic: 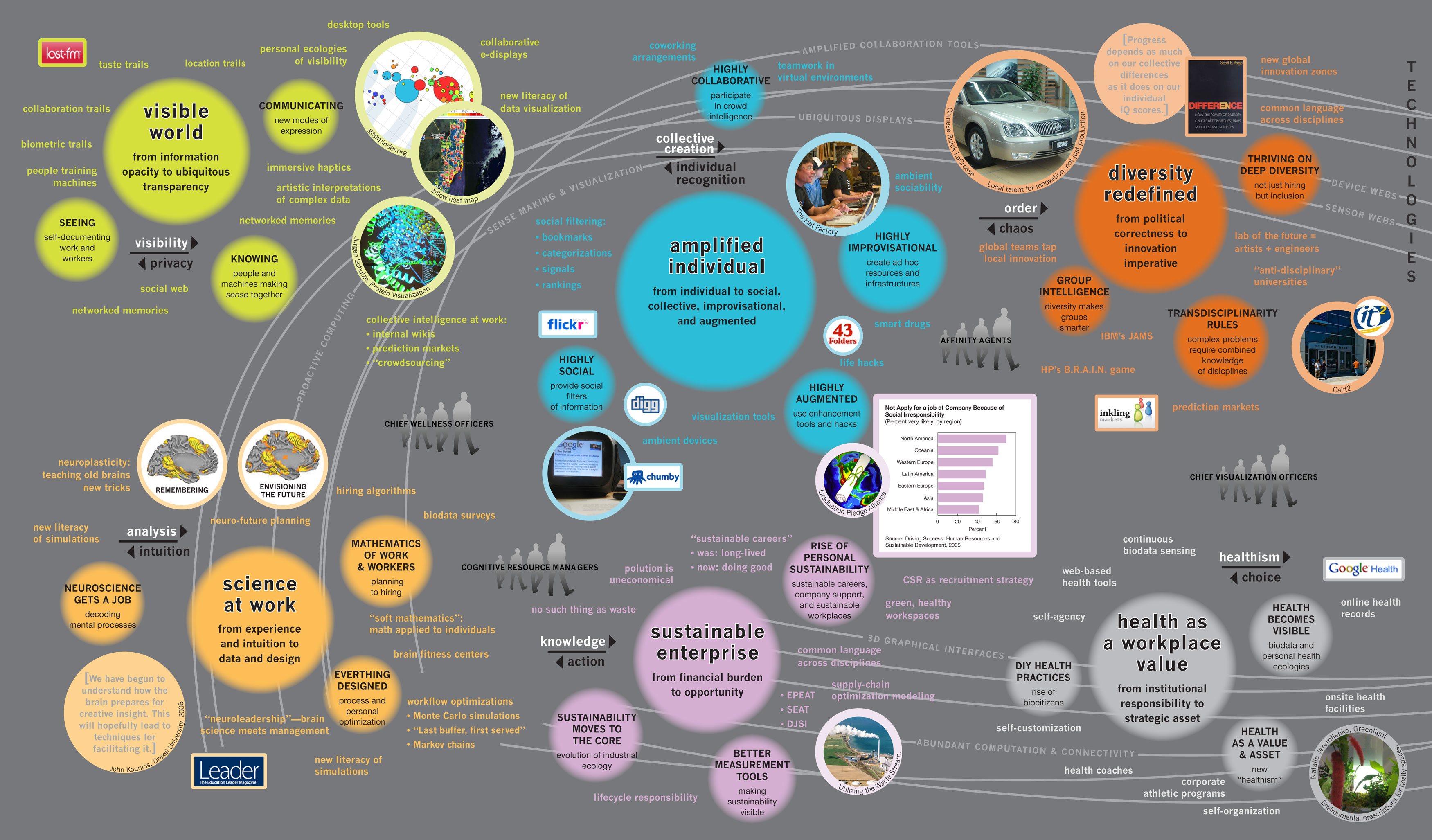 Automation, on-demand platforms, and task-routing practices are rapidly disrupting the workforce and transforming the landscape of labor economics. At times, these changes seem to be outpacing our ability to analyze impacts, design for positive outcomes, and set policies that could assure workable futures for everyone. The IFTF Workable Futures Initiative is a call-to-action for policymakers, platform developers, corporate strategists, and change advocates to blueprint positive platforms for people who work—and indeed to rethink the future of work itself.

Some more recent articles and reports:

Baseline — The Pros and Cons of the On-Demand Economy (November 2016)
Entrepreneur — Wanted: Creative Solutions to Shape a Workable Future (October 2016)
Forbes — 5 New Rules for Managing a Digital Workforce: Ditch the Resume, Skip the Training (October 2016)
JD Supra Business Advisor — New Studies Provide Insight into the On-Demand Economy (October 2016)
Wall Street Journal — The Two Gig Economies: One Happy and One Miserable (October 2016)
FastCompany — Can We Design an On-Demand Economy That Will Work for Everyone? (October 2016)
Boing Boing — Voices from the On-Demand Economy (October 2016)
Fortune — This Is the Backup Career For More and More U.S. Workers (September 2016)
GE Reports — Why There’s No Such Thing As A Skills Gap (September 2016)
Democracy Journal — Prosperity by Design (September 2016)
Medium — We Don’t Have a Skills Gap, We Have a Human Potential Gap (July 2016)
U.S. Department of Labor Blog — The Future of Work: Diving into the Data (June 2016)
FastCompany — These Are The Labor Promises The Presidential Candidates Should Be Making (June 2016)
EDUCAUSE — Thinking about the Future of Work to Make Better Decisions about Learning Today (May 2016)
FastCompany — These Will Be The Top Jobs In 2025 (And The Skills You’ll Need To Get Them) (March 2016)
diginomica — The future of work intensifies—can a platform be ethical? (December 2015)
TechCrunch — What We Need To Know About On-Demand Work Platforms Before Regulating Them (August 2015)
Forbes — Managers Beware: AI Is Coming For Your Job As Well (August 2015)
U.S. Department of Labor Blog — Imagining a Bright Future of Work (July 2015
<re/code> — It’s Not About Uber: Beyond the W-2 vs. 1099 Debate (June 2015)
Harvard Business Review — Here’s How Managers Can Be Replaced by Software (April 2015)
Forbes — The Future Of Work And Our Social Compact (June 2015)
Computerworld — Think your management job is safe? Beware the ‘iCEO’ (April 2015)
The Wall Street Journal — Can your CEO be automated? (April 2015)

Ross Dawson has been thinking about the future of work too. This is his view of the emerging landscape: 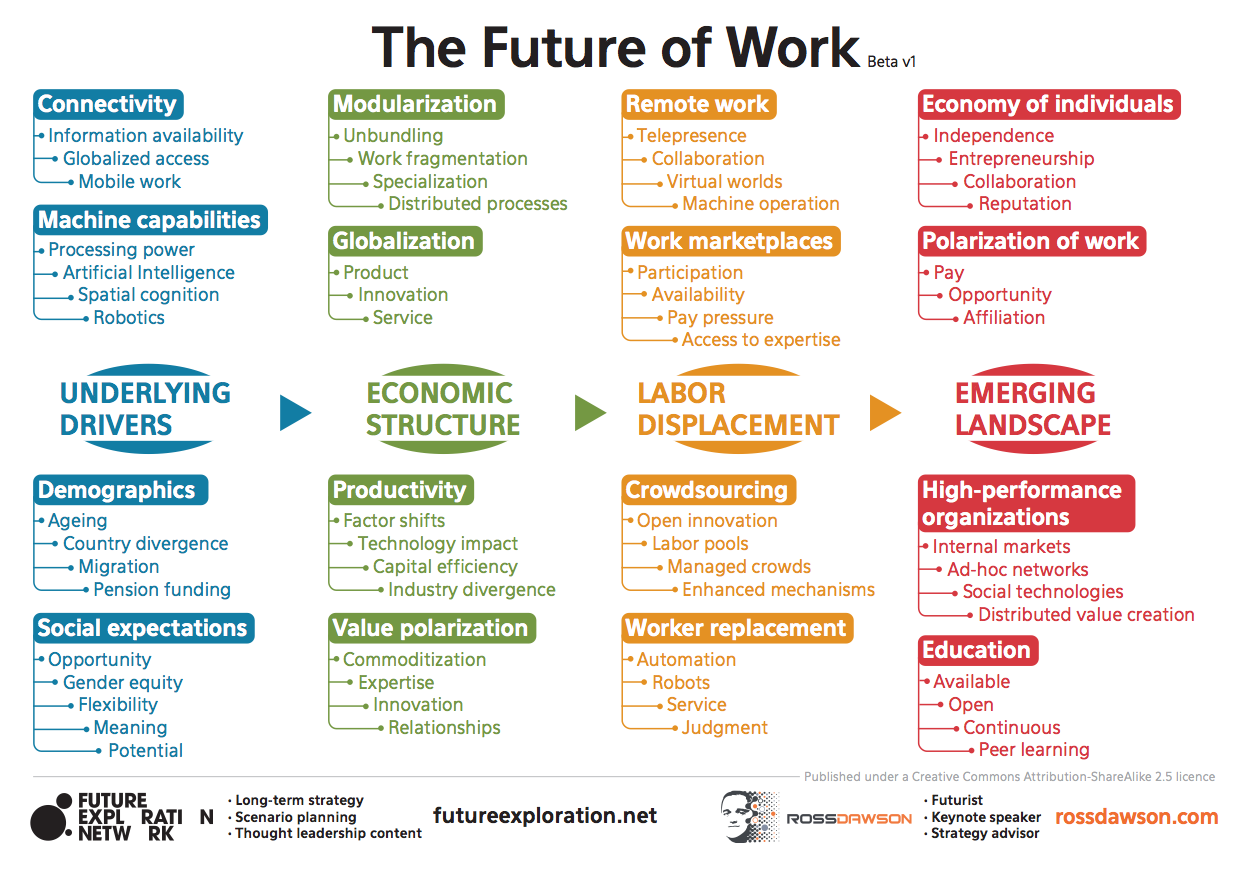