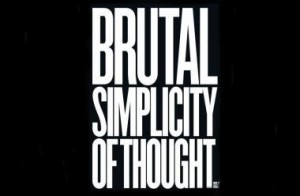 “I wore a brown paper bag over my head for years about the Midland Bank, but now I’ve taken it off,” Maurice Saatchi told the Guardian in a rare interview (during which he admitted watching Mad Men and said he found it “painfully realistic”). “The record seems to show that our mistake was not trying to buy the Midland Bank, but failing to buy it. As HSBC can testify, it was the deal of the century.”

Though his record as a businessman is tarnished, his influence on British politics seems without question. Maurice, now elevated to Lord Saatchi after a spell as chairman of the Conservative party, is proud of: “A splendid 30-year relationship with five election victories through which we achieved the status of a footnote in British political history.” He says that the agency’s reputation as Margaret Thatcher’s favourite gave it instant credibility in America and offers a robust defence of their methods: “Professor David Butler, who knows more about British politics than anyone living, told me our impact on politics had been entirely negative; ie, that we invented ‘negative campaigning’ in general elections and that nobody could ever turn the clock back,” he explains. “As always, he is right. Politics is not a world for the squeamish or fainthearted. Here, you will hit or be hit. We took our approach from Sir Jack Fisher, who was an Admiral of the Fleet when Britain’s navy still ruled the world. His principle was: ‘Hit first! Hit hard! Keep on hitting!’

“John Major brilliantly summed up the merit of this approach when he was asked by the Guardian at a Central Office election press conference: “This room is surrounded by negative images about Labour. Don’t you, as prime minister of Great Britain, have anything positive to say about your own party?” Major’s answer was that he was speaking that day as the leader of the Conservative party and that it is the duty of any party leader to point out the defects in his opponent’s position. He went on to win the unwinnable 1992 general election a few weeks later.”

Saatchi’s enduring reputation in the party was underlined when David Cameron turned to him to bolster the Tory campaign just a few months before the latest election.

The words “brutal simplicity of thought” sum up the Saatchis’ approach: “Its origin lay in Bertrand Russell’s masterpiece, The Conquest of Happiness, in which Russell explains that happiness can only be achieved by ‘the painful necessity of thought’. The phrase expresses our distaste for waffle and vagueness and a strong preference to get to the point. For all these years, the phrase has acted as a threshing machine. It separates the intellectual wheat from the chaff. It reminds us that simplicity is the outcome of technical subtlety; it is the goal, not the starting point. Now more than ever, because people are busier than ever, a precis is a modern form of good manners.”

In the end, Britain’s fiercest attack dog – who was bitter about the manner of his departure and the continued use of his family name by a rival firm – seems philosophical about friends and enemies alike. Looking ahead to the Saatchistory party attended by staff from both agencies, the main political parties and most major corporations in the UK, if not the world, he quips: “As it’s taking place in the Saatchi Gallery, perhaps the best moral of the story comes from WB Yeats: ‘Think where man’s glory most begins and ends/And say my glory was I had such friends.”