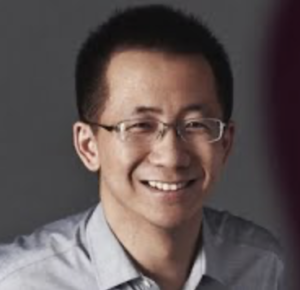 ByteDance  @BytedanceTalk
"At #ByteDance, you're part of a major tech company while being a pioneer of new products. My team only has 3 engin… https://t.co/cQCYZhvHdn
reply retweet favorite

ByteDance  @BytedanceTalk
In light of World Mental Health Day, we’d like to share a few of the steps managers at ByteDance take to improve th… https://t.co/s7qlSGGvCU
reply retweet favorite

ByteDance  @BytedanceTalk
We're proud to announce that #ByteDance Singapore has been certified by Great Place to Work®! 🏆 This certification… https://t.co/GMWZTJ4VuA
reply retweet favorite

ByteDance  @BytedanceTalk
How does Sarah, an engineer on our Global Payments Team in Singapore, describe the culture at #ByteDance? "We set… https://t.co/iOCe3zIttK
reply retweet favorite
Load more

Founder of Bytedance, the world’s largest unicorn business, and the man behind the rapid growth of TikTok

ByteDance is a tech company with platforms that span 150 markets and 75 languages - including TikTok, Helo, Vigo Video, Douyin, and Huoshan. It describes its mission as "to inspire creativity and enrich life" adding "We believe that every spark of inspiration is worth the spotlight."

TikTok competes with Snapchat and Instagram as the social media platform of choice for most young people.

Since its launch three years ago it has grown rapidly to 1 billion users, and is in the news because of its Chinese origins. While it is definitely a hit with young people, the US President is less keen, using security concerns as an excuse to escalate trade wars.

TikTok’s infectious 15-60 second videos, most often in the form of choreographed dances, have spread rapidly in lockdown. In the UK, for example, 27% of 18-24 year olds now use the app, compared to 7% back in March.

TikTok was created by Bytedance, often described as the world’s largest “unicorn”, founded in 2012 by Zhang Yiming. The business was recently valued at around $100 billion following substantial investment by SoftBank (double the potential value of its TikTok subsidiary).

Like his compatriot Jack Ma, 37 year old Zhang had an inauspicious start to his career. Having studied software engineering in Tianjin, he joined Chinese travel start-up Kuxun in 2006, its fifth employee, later becoming its technical director.

In 2008 Zhang joined Microsoft, but felt stifled by the corporate environment and soon left to join another start-up, Fanfou (created by Wang Xing, who later founded Meituan Dianping). When Fanfou failed, he returned to Kuxun, which was acquired by Expedia, formerly part of Microsoft. He left to start his first business, in online real estate, 99Fang.

Zhang now had the entrepreneurial bug, and saw in the rapid growth of mobile phone usage, an opportunity far beyond making calls. In China, and other emerging markets, phones were many people’s first experience of the internet, yet phone apps and interfaces were poor. Chinese users had a new thirst for information, and he saw the opportunity of artificial intelligence to push relevant content to users in more personal and intuitive ways.

Bytedance initially launched Toutiao (meaning “Headlines”) which focused on using AI to aggregate and recommend news to individuals, both from established media and user generated content. Most investors turned Zhang down for funding, seeing a Chinese tech market already dominated by the likes of Alibaba, Baidu and Tencent.

However Zhang soon found a profitable niche in entertainment apps, sharing viral jokes, memes and videos, It’s first app Neihan Duanzi gained 200 million users in 2017, but was closed down by Chinese censors for being “incommensurate with socialist core values”.

Zhang soon returned in 2016 with Douyin, a Chinese social network that creates short music, lip-sync, dance, and comedy, mostly in the form of short videos. This functionality was significantly enhanced with the acquisition of the American app Musical.ly in 2018, which also led to the launch of an international version of the app, branded as TikTok, later that year.

Zhang remained acutely aware of China’s censors, the concerns of other nations, and the experience of Huawei. He sought to separate the TikTok business where possible, for example by storing all of its data in USA and Singapore. In June, Kevin Mayer, previously chairman of Walt Disney International joined TikTok as CEO, and as Bytedance’s COO. TikTok, with over 1 billion users, is now twice the size of the Chinese version, Douyin.

In 2021, Zhang stepped down as day to day CEO,  and is succeeded by Rubo Liang. However he continues driving the business forwards, and increasingly dominating the GenZ social media world.