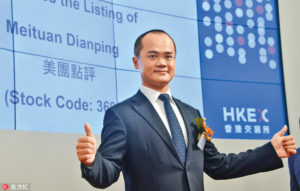 Meituan  @meituan
“We firmly believe that consumer confidence will eventually recover as the pandemic passes, and our businesses that… https://t.co/UYZ0LrWK1b
reply retweet favorite

Meituan  @meituan
“We have witnessed that the consumer mindshare of Meituan as being able to deliver everything to their doorsteps ha… https://t.co/hCoDZpQH2U
reply retweet favorite

Meituan  @meituan
“This quarter, we adhered to our ‘Retail + Technology’ strategy, and provided better services to a broader range of… https://t.co/ggRsJz5bON
reply retweet favorite
Load more

The Chinese super-speedy delivery business, that realised that its key asset was consumer data

Meituan Dianping is a Chinese delivery business that grew rapidly first in delivery food, and then in every types of business. It wasn't the first business that Wang Xing had founded, but this one worked. As the business grew, he realised his strength was not just in last mile logistics, but in knowing Chinese consumers better than anyone else. Fast Company ranked Meituan as “the world's most innovative company” in 2020.

Despite a series of early setbacks, Wang Xing, a 39-year-old Chinese tech entrepreneur has built what is now considered as the leading on-demand services platform, with a huge fleet of bikes that will deliver anything anywhere anytime in China.

Born in Fujian Province in 1979, Wang was the son of a wealthy businessman and factory owner. As a child, Wang was an avid reader and excelled at school, graduating from Beijing’s Tsinghua University in 2001, and going on to study for a PhD in Delaware, USA. However watching the speed at which Chinese markets were changing, and despite having almost completed his doctorate, he headed back to Beijing to enter the world of business.

Wang became known as “the copycat” because of his habit for creating Chinese versions of successful Western businesses. His initial Facebook-like social network for students did not take off, until he launched Xiaonei in 2005, which swiftly accumulated tens of thousands of users. However, lack of additional funding led him to sell it for $2 million a year later (Renren, its acquirer went on to float it for $740m).

He kept trying, launching a Twitter-like network called Fanfou, which translates as to “have you eaten”. Within two years, it had accumulated millions of users, but was shut down by the government for highlighting political issues.

In 2010 he and his wife Guo Wanhuai launched a Groupon-inspired group-buying platform Meituan. Backed by internet giant Tencent, it quickly expanded to become China’s (and the world’s) largest food delivery company.

Since then the “online to offline” platform has expanded rapidly to over 3000 Chinese cities, and after merging with Dianpingin 2015, Wang’s business now brings together TripAdvisor-style restaurant reviews and hotel bookings, bike sharing, cinema tickets, deliveries of all types, and ride-hailing services.

Beyond a vast “last mile” delivery network, Wang realised that he had something even more valuable, a huge database of the new, rapidly growing, Chinese middle class. A recent McKinsey study suggested that 76% of China’s urban population will enter the middle income bracket by 2022, with household earning between $9,000 and $34,000.

Despite his personal wealth, estimated to be around $13.5 billion, Wang has earned a new nickname in China, as the “poet entrepreneur”. His many Fanfou blog posts portray a solitary figure, with a particular fondness for Haruki Murakami’s “Norwegian Wood”, along with classic Chinese poems and literature.