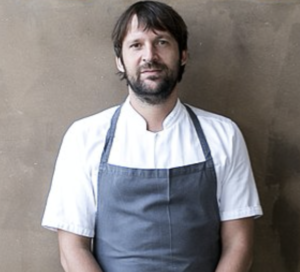 Rene Redzepi  @ReneRedzepiNoma
RT @nomacph:Friends! During the lockdown we’ve been working on projects to stay focused & creative. With our opening on the hor… https://t.co/73H0MB2lyN
reply retweet favorite

Rene Redzepi  @ReneRedzepiNoma
I will never be able to understand how life must be as a POC, but I do know on which side I stand. In solidarity wi… https://t.co/342y8H0p6r
reply retweet favorite
Load more

The world’s most celebrated chef, opened Noma in his native Copenhagen at the age of 25, with a cuisine that reflects his locality.

Redzepi is the world’s most celebrated chef. He could not have had a better education. His apprenticeship was served in two of the world’s greatest restaurants – Catalonia’s el Bulli and California’s The French Laundry.

Under the guidance of the great Ferran Adria he developed a passion for experimentation, and a love of seasonal ingredients. In Napa Valley he was instilled with a commitment to working with local suppliers.

In 2003, aged 25, he opened Noma in his native Copenhagen (an abbreviation of the words “Nordic” and “mad”, which means food in Danish). He wanted to create a cuisine that represented the environment in which he found himself, giving rise to the term “new Nordic cuisine.”

Redzepi sought to develop a cuisine that reflected the soil, topography and climate of the place. He says “All of the people who work in the kitchen with me go out into the forests and on to the beach. It’s a part of their job. If you work with me, you will often be starting your day in the forest or on the shore because I believe foraging will shape you as a chef.”

From this a 10-point New Nordic Cuisine Manifesto was drawn up in collaboration with other Nordic chefs, with an emphasis on seasonality and simplicity.

The aims of the New Nordic Cuisine are:

More than the ingredients, people became his passion. He sees eating as a deeply human experience, emotional and personal, achieved as much through the service and style of his staff as what people eat, and where they are.

His staff have become a family, as he describes them, without the typical hustle and stress of a busy kitchen. Best known to customers is his long-serving maitre’d, Ali Sonko, a tall Gambian in his sixties, with an infectious smile, who started as a dishwasher in the kitchens when it first opened, and now owns a 10% stake in the business.

Equally, his partnership with local suppliers secures him the freshest produce, and their collaboration in creating dishes that continue to inspire both him and his clientele.

The original Noma in Copenhagen closed in 2017, with Redzepi and his team seeking to reinvent the restaurant. Initially they open an incredibly popular pop-up in Mexico, a kind of vacation to gain new inspiration, whilst they established a new restaurant, less than a mile from the old one.

Situated on a beautiful lake, the new Noma is a former ammunition storage facility for the Danish military, with numerous greenhouses where the produce is grown. Designed by famed local architect Bjarke Ingels, the buildings have been converted to resemble an old Danish village.

Originally, menus were based on what ingredients were most readily available, although using meet and fish throughout the year. It has now moved to a three season model – focusing on seafood for 4 months, then vegetables for 4 months, and then game.

Of course getting into the restaurant is probably the hardest part. Noma release reservations three times during a year, with thousands of cultured diners waiting to click on the website the moment it opens. You also need to pay at the time of booking, typically around $350 per person, although a meal typically consists of around 20 courses.

As a quick taster, the first course might be a plant pot with a thyme plant. Take a straw, and you’ll find an exquisite soup inside. A tart of crisp potato and nasturtium flowers might follow, and then a salted seaweed roll, fresh from the local beach. Quail’s eggs topped with fresh berries are next, then cucumber skin cannelloni filled with nuts and mushrooms. We’re still on the starters, at this point. You’ll need to visit to discover the main course.

With two Michelin stars, Rene Redzepi’s Noma has been voted the best restaurant in the world on four occasions.