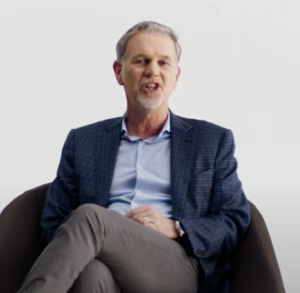 Reed Hastings  @reedhastings
RT @netflix:Wednesday now holds the record for most hours viewed in a week for an English-language series on Netflix, with 341.… https://t.co/g8KEmP0p8W
reply retweet favorite

Reed Hastings  @reedhastings
Ugh. I had been hoping Iger would run for President. He is amazing.
reply retweet favorite

"No rules" rules at Netflix, provided that you deliver on exponential growth

“If you want to build a ship, don’t drum up the people to gather wood, divide the work, and give orders. Instead, teach them to yearn for the vast and endless sea.”

Hastings revolutionised how the world watches movies. He cofounded Netflix in 1995, the same year he sold his first company, Pure Software. Having grown up in a world of VHS videos, usually rented from a local store, he got the idea for Netflix when he owed his local Blockbuster store $40 for a movie he had misplaced. A new format, DVD was emerging, and he started offering them to be delivered and returned by mail for a flat monthly subscription fee, challenging Blockbuster’s high costs and inconvenience.

He famously said “as an entrepreneur you have to feel like you can jump out of an airplane because you’re confident that you’ll catch a bird flying by. It’s an act of stupidity, and most entrepreneurs go splat because the bird doesn’t come by, but a few times it does.”

In 2011, he went further, introducing an online streaming service, at a higher subscription fee. Netflix’s stock price stumbled, and the Huff Post called him “monumentally stupid.” Today, Netflix has a market value almost identical to Disney, a model for engaging consumers through the power of big data and AI, to understand them more deeply, and to create content that is personal and compelling to them.

“Entertainment is a core human need”, says Hastings. “It changes how we feel and gives us common ground. The invention of motion pictures 120 years ago, and then of television 70 years ago, were the first two entertainment revolutions. The third revolution is streaming, personalising any-screen anytime anyplace video, which allows Netflix to provide better entertainment at lower cost and greater scale than the world has ever seen.”

While Netflix is admired across the world for its innovative business model, Hastings realised that it needed to innovate how it works inside too – how people engage in work and lead others – in order to deliver the external promise and sustain its market momentum.

Netflix’s “Culture Desk”, subtitled “Freedom and Responsibility” has been described by Sheryl Sandberg as “the most important document ever to come out of Silicon Valley.” It was developed by former chief talent officer Patty McCord. She and Hastings were unimpressed by most organisations, and didn’t want Netflix to be the same.

The document describes “the unusual ways we work together so we can eventually entertain everyone”.  Instead of listing the company’s core values like every other company, they decided to write down the things the company valued, what mattered to them, what they expected of their people.

They started with “Like many great companies, we strive to hire the best and we value integrity, excellence, respect, and collaboration. What is unique and special, though, about Netflix is how much we encourage independent decision-making by employees; share information openly, broadly, and deliberately; are extraordinarily candid with each other; keep only our highly effective people; and we avoid rules”.

They agreed that there would be no vacation policy and no travel policy, and everyone is paid more than their market rate.  You can book your meeting in “The Matrix” or “Dr Strangelove” conference room. And if you need some noise-cancelling headphones, just swipe your ID on one of their “tech vending machines” and they’re yours at no cost. “If you look at an innovator’s mind, the innovator never says we should look around and see what everyone else is doing and do it a smidge better” says Hastings, “we just took risks with the people stuff, just like we took risks with the business.”

It’s not all fun and freedom, however. There is a hard edge. He admits that in reality much of Netflix’s approach has been about tolerating a level of chaos and error, to stimulate innovation. But that gets more difficult as you grow in size and locations.

Judgement is key, he says, although admitting that judgement is subjective. “Brilliant jerks” are sacked, and Hastings describes the company as “a team, not a family”. Employees are subject to the so-called “keeper test”, where adequate performance is rewarded with “a generous severance package”. He describes the culture as “jazz rather than orchestra”, managing through values and context, so that everyone is doing the right thing without central coordination.

Hastings has spent the last 18 months trying to capture the essence of Netflix’s culture in a new book, written with INSEAD’s Erin Meyer. Having worked with Meyer, who is best known for The Culture Map exploring how different cultures can work together, they seem like polar opposites. The digital entrepreneur comes across as rambling and folksy, while the Paris-based academic is smart and precise.

No Rules Rules is written separately by both, in alternating chapters. Indeed Meyer admits that her first reaction to Netflix’s culture was “hypermasculine, and downright aggressive”. However it’s an interesting, inspiring, read. And timely too, given that many of us have spent much of the last 6 months, sustained by multiple Netflix series.

At Netflix, there is no vacation or expense policy. Employees are guided by a single 5 word principle – “Act in Netflix’s Best Interest”. This has made employees more responsible and they do outstanding work.

Think global act local is important to understand how each country reacts to the content. This is one of the reasons why Netflix’s original series (Sacred Games, Ghoul, Delhi Crime, Jamtara, Hasmukh) connected with Indians.

Set broad context to achieve goals and lead high performing employees by inspiring them to stimulate their creativity to create great ideas that help your company.

Reed Hastings keeps it very simple that building great company culture is all about freedom and inspiring employees to serve customers.

At Netflix, people are encouraged to share their knowledge so people have relevant information to make appropriate decisions for the company.