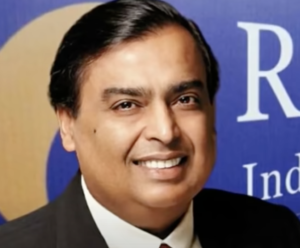 From industrial conglomerate to the Jio super-app, that is now transforming Indian life

The richest man in India had done it all, until he decided to join the tech revolution. Jio, his mobile phone business, went from launch to market leader in three months - he gave it away free, and created a huge sponsorship business too. Then he recognised that the phone was just a platform to do more, and launch Jio Platforms, a super-app that is now transforming Indian life.

Mukesh Ambani is India’s richest man, managing director of Reliance Industries, one of India’s most successful companies of the last decade.

Born in the Yemeni capital Aden, he grew up in a two-bedroom apartment in Bhuleshwar near Mumbai. At school, he and his best friends – Adi Godrej, Anand Mahindra and Anand Jain – were obsessed with sports, in particular hockey (each of the friends would go on to become billionaire business leaders). A turning point in Ambani’s life came whilst he was studying for an MBA at Stanford but decided to drop out before he could finish his studies.

He began working for his father to build Reliance into an $100 million international group, with subsidiary businesses in energy, petrochemicals, textiles, natural resources, retail, and communications.

Reliance’s motto “Growth is Life” seeks to capture the ever-evolving spirit of innovation and exponential growth. His vision has inspired Reliance to become a global leader in various sectors, including the largest polyester yarn and fibre producer in the world.

He thrives on challenging conventional wisdom, seeking “to touch the lives of people in a positive way”. Whilst he can appear shy in public, maintaining a low profile, he own’s the world’s most expensive home – located in Antelia to the south of Mumbai, the 27-story building comes with his 600 staff, a cinema where he watches at least 3 movies a week, and is estimated to be worth $1.5 billion.

As an example of his focus on speed and innovation, he commercially launched his JioPhone (a 4G functional phone, offered at very low prices) in India in September 2016. Within 4 months he had gained 100 million subscribers, the fastest market penetration of any tech device in history. He has since tripled that number of subscribers and is on course to go from new entrant to market leader in 3 years.

“My obsession is with technology and how it can improve human life. In my view, what we have seen in the last 300 years is only a trailer” he says, adding “I am a big believer that whatever has gone lies in the past. You should only learn from it, and you should only look at the present and the future. That’s been my father’s philosophy and mine as well.”

Jio has now become a super-app, using the mobile phone as a platform to bring together services in many different sectors – from groceries and food delivery, to energy and entertainment, healthcare and education, travel and banking. And much more. Google and Meta are both investors in Jio, which is rapidly transforming Indian life.