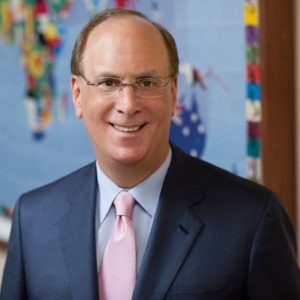 BlackRock  @BlackRock
How can investors position for the continued economic and market volatility we see ahead? Our 2023 Global Outlook p… https://t.co/m9N1UTeyUq
reply retweet favorite

BlackRock  @BlackRock
A bigger share of the U.S. population has reached #retirement age and some workers retired early due to the pandemi… https://t.co/IyjmG6k7yM
reply retweet favorite

Larry Fink leads the world's leading investment company. BlackRock’s mission is to help investors build better financial futures and the firm is trusted to manage more money than any other investment company in the world. Each year he write a letter to the CEOs of the world, to the people who he invests in, about how we sees the challenge of business in the world - the need for more purpose, the urgency of climate change, the shift from shareholders to stakeholders as the source of value creation.

Larry Fink shocked the financial world in 2018, when he declared that his BlackRock investment firm would only invest in companies that could demonstrate that they had a meaningful purpose beyond profits.

Over the previous 30 years Fink had built BlackRock into the largest investment firm in the world, with almost $9 trillion in assets under management. However, he was always a leader who looked beyond the numbers. His letter to the CEOs of nearly every large company in America deplored the corporate culture of short-term thinking and threatened to vote out board members who did not hold management more holistically accountable. Other large investment firms have followed BlackRock’s lead.

“If the system is really going to change, pressure needs to come from the investment community,” says the Drucker Institute. “And no voice has been more important or more forceful in this regard than Larry Fink’s.”

2018 Letter to CEOs: in his most disruptive letter, that marked his shift to purposeful thinking, he wrote that a long-term perspective matters more than short-term returns:

2019 Letter to CEOs: he became more specific about the relative importance of purpose and profit, saying that profit was an outcome, but purpose was the goal:

2020 Letter to CEOs: he called for a fundamental reshaping of finance, driven by the urgent need for governments and businesses to respond to the challenges of climate change:

2021 Letter to CEOs: he wrote that achieving “net zero” carbon emissions is the best way to drive investment growth, and economic recovery.

2022 Letter to CEOs: he addressed the power of capitalism, but also the changing nature of capitalism – from profit to purpose, shareholders to stakeholders, and more:

Institutional Investor has called Fink “the Steve Jobs of the money game” for his ability to foresee a changing world, where most peers are limited in their mindsets by conventional assumptions and incremental solutions. Fink says he is ready to shake-up BlackRock and the entire industry “We need to be willing to reimagine every aspect of our company and how we manage it,” he wrote “and so should every other business”.